Home - The importance of not giving up

The importance of not giving up

Earning a good medal (ranking number one) in Khmer Literature exam is something many students aspire to achieve, but only the most diligent and hardworking can get their way on top. Sun Singhuy is definitely one of the cream of the crop.

At 18, Ms Singhuy got a gold medal in the Grade 12 Khmer Literature last year, topping other exam takers in one of the most significant tests for the Grade 12. However, the journey towards her success in the exam was not easy. Ms Singhuy started dreaming to top the exam when she was in Grade 9, but she initially failed. With hopes still intact, she strived hard to study the subject and gave her best during last year’s exam for the Grade 12 students.

“It’s funny because I ranked first in the Khmer Literature exam among all other students, but I actually got a C on the national exam. I also failed to top in Grade 9. It really saddened me. I even got mocked by my friends. But then, I used that failure to be my motivation. I just thought that maybe I didn’t give my all during those times,” Ms Singhuy shared.

“I always keep these words in my heart – when people think small of you because you did not succeed in your first try, you have to be stronger. That became my mantra to study more and more, do more research with Khmer grammar, spelling and sentence constructions,” she said, noting that she never lost the drive to be on top of the exam because of her great passion for Khmer Literature.

The Khmer Literature exam lasted for a total of 10 days – three days for exam proper and seven days for sharing and fellowship among participants. Last year’s exam took place in Battambang province, where 80 Grade 12 students came together.

“When we stayed together in a room, we shared our own understanding and difficulties with the Khmer Literature. We explained our thoughts. Someone even asked me for some tips on how to write concise and creative paragraphs. We also had discussions on the other aspects of Khmer writing,” she shared.

Ms Singhuy is the eldest and the only girl among three children. Growing up, her family met several problems but has remained strong, even without a father.

“My mother was sick and my two brothers were still small when my father left our home. I had to sell some items instead of studying just so we have food in the table.”

She added that her mother initially did not support her studies because of financial setbacks. But after getting a scholarship, her mother was the one who inspired and pushed her to study more and achieve her life goals.

Ms Singhuy is currently preparing for her International Relations (IR) course at the Zaman University. She got a scholarship from the school, and will be able to study for free. She also recently did internship at Study Abroad Center (Cam-Asean).

“I chose to get IR because it’s easy to find work. And it’s also my favourite because I like to communicate with people and to learn new things from others. I like to work at the embassy or at the ministry in the future. But hopefully, I can also establish my own business.” 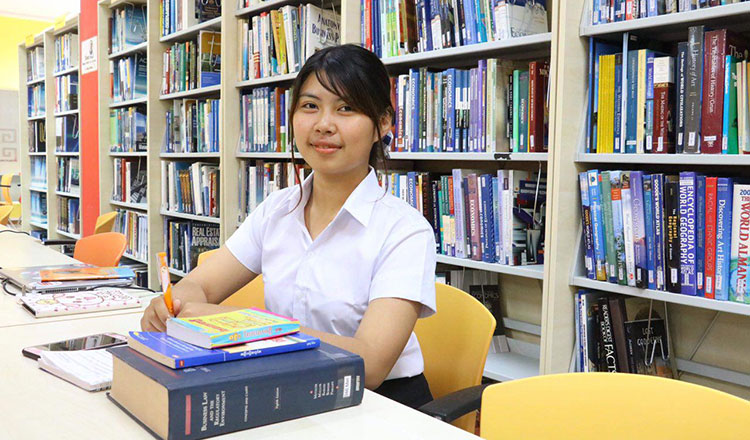 With her experiences – from failing to eventually achieving her goal – Ms Singhuy wants young students to start reviewing and studying Khmer Literature and all other subjects for the national exams.

“Students should examine themselves on which subjects they’re good at and which ones they’re not. That’s how they can balance their time in studying. Also, they need to prepare a timetable for studying and for other chores. Most importantly, they should reduce laziness,” Ms Singhuy said.

She is also writing a book that will inspire students to value education. She dreams to publish it when it’s done.