Home - Construction projects under review after collapse in Sihanoukville

Construction projects under review after collapse in Sihanoukville

As criticism mounts over a lack of permits in the construction of buildings in Preah Sihanouk province, Prime Minister Hun Sen on Monday ordered a recently created inspection team to review all construction buildings to ensure that the owners and contractors have proper papers.

The news came after a building collapse in Sihanoukville on early Saturday morning that claimed at least 28 lives and injured 26 other workers.

On Sunday, the government issued a directive for the creation of the Committee for the Inspection of the Quality of Buildings in Preah Sihanouk province.

The committee is tasked with reviewing technical aspects, standards, and safety of construction buildings. It has the authority to draft and file a report to the Land Management Ministry.

Mr Hun Sen on Monday night, during an inspection of the collapse site, said Land Management Minister Chea Sophara and the team must evaluate whether all construction buildings have a permit.

“Any building that is without permit must be suspended,” he said. “Do not allow this case to happen again.”

“We do not need to be [officials] of the state if we do not have the ability to prevent the construction of buildings like this,” Mr Hun Sen added.

According to Mr Hun Sen, he heard reports that the owner of the collapsed building did not have a construction permit, but went on with the construction regardless.

“I should ask where the power of the authorities was. You let constructors be city governors, provincial governors – maybe it’s better to let them be prime ministers,” he said. “This tragedy provided a lesson and the lesson is that the authorities must show accountability.”

Erecting buildings without a permit is illegal in the province.

In October, the Land Management Ministry issued an order to then provincial Governor Yun Min to stop all construction projects lacking permits.

“I would like to inform [the governor] that […] some construction buildings are nearly complete without permits […], which goes against a sub-decree stating that construction permits are required,” it said. “This could cause construction offences, impact public order and low quality buildings.”

On Monday, Mr Hun Sen accepted the resignation of Mr Min for failing to manage the booming construction sector in the province. He also sacked the first vice president of the National Committee for Disaster Management Nhim Vanda.

According to Mr Hun Sen, any official that fails to halt buildings from being constructed without permits must be sacked.

“It’s not only Preah Sihanouk that is trying to prevent un-permitted buildings to be constructed,” he said. “If this issue remains, I will continue to sack officials involved.”

“We don’t have evidence and evidence was never provided to us, but you all know about bribery,” Mr Hun Sen said without elaborating further. “I am sad that constructors were allowed to be provincial and city governors.”

“I think it’s good that he ordered officials to investigate. It is necessary to first suspend all construction projects temporarily to avoid negative impacts in the future, because we are not sure if other construction buildings will too collapse,” Mr Tola said, adding that Cambodian officials should work with Thai and Malaysian experts to inspect construction sites in Sihanoukville.

Kheang Phearum, spokesman for Preah Sihanouk Provincial Hall, declined to comment yesterday, while Mr Min, the former governor, could not be reached.

According to Mr Hun Sen, Mr Vanda failed to report Saturday’s collapse as the former attended the Asean Summit in Bangkok.

“I didn’t receive a report from him when I was in Bangkok,” he said “I sent him a text and he did not reply.”

“I will no longer keep officials who lie. I have just removed him from the government and appointed him as advisor to the Royal Government,” he added. “If he is not satisfied, I will remove him from the advisor post as well.” 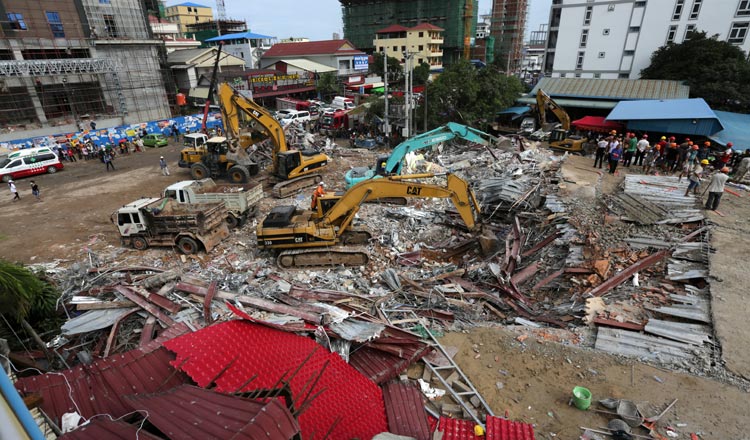 Yesterday, Reuters reported that seven people, including five Chinese nationals, were charged with involuntary manslaughter and conspiracy over the building collapse.

Victims have reported that up to 60 workers were living in the building when it collapsed, a common but dangerous practice in the Kingdom’s construction sector. Twenty-six construction workers have been rescued from the debris following the collapse.