Preah Sihanouk provincial authorities have arrested four people in conjunction with the collapse of a seven-story building early Saturday.

The collapse of the building caused three deaths and injuries to 18 others.

According to the provincial police report which Khmer Times obtained on Saturday afternoon, as of 9:00 am on June 22, police officials had arrested and detained four people who were believed to be involved in collapse of the building. 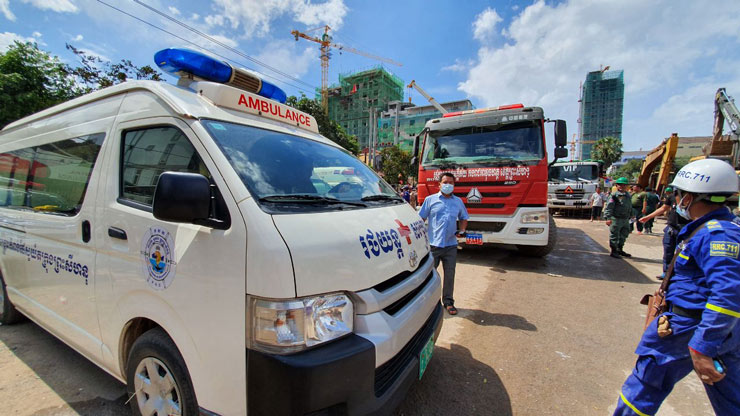 They were identified as Mr Chen Kun, 39, a Chinese national who had leased the land for constructing the building, Mr Deng Xing Gui, 48, a building contractor, Mr Gao Yu, 29, concrete wall contractor and Mr Nhek Huy, 65, a Cambodian and who is the owner of the land.

“They are being questioned at the provincial police station and face legal action.” the report reads. “Provincial police unit is coordinating and cooperating with the relevant units to remove the debris in case there were more victims buried in the rubble while simultaneously carrying out investigations.”

It added that more than 150 officials are trying their best in the search and rescue operation and also the and removal of the debris.

Provincial administrative office has issued an announcement on Saturday noon, June 22, that among the three dead was one woman and the 18 injured, now conformed to be all Cambodian nationals, were construction workers who stayed in the building.

The provincial authority used a helicopter in facilitating the search for possibly trapped victims.

Yun Min, provincial governor, has created a task force comprising 16 officials to be on the ready at the scene for helping people in the building.

“This task force has to stay at the scene for rescuing possible victims in the building, prepare ambulances for sending the victims to hospital on time and report regularly to provincial administrative,” said Mr Min. 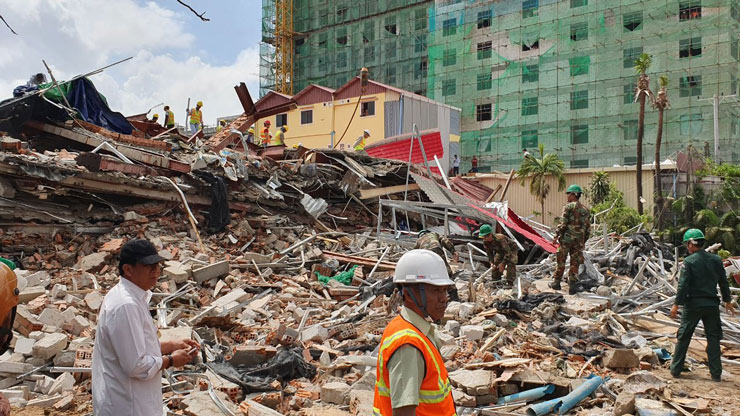 In the early morning mishap which took place at approximately 430am Saturday, a seven story building under construction, believed to be a possible hotel building, collapsed.

Initial reports confirmed that at least three people were killed while up to 18 others were injured.

“Those who were injured were quickly rescued and sent to hospital,” said a provincial official who added that search and rescue were on going while trying to determine the exact number of people who may have been inside the unfinished bulding when it collapsed.

The collapsed building under construction is believed to be a future hotel if finished, is located near the Arun Ras car wash in Sangkat 4. This is the first disaster of its kind in terms of collapsed building in the province and according to officials, the collapse was possible because of technical and structural issues.

Minister of Education instructed to schools to prevent on dengue fever