The weekends are made for us to unwind. For some, this could mean having a lazy day by the pool, reading their favourite book and watch the day passing them by slowly. While for others, it could mean escaping the concrete jungle for a slight breather. What if we tell you that there is enough time for you to squeeze in both activities over one weekend? Impossible, we think not. Anith Adilah Othman embarks on a day trip to Tonle Bati, a small lake some 30km away from Phnom Penh, to prove that it was worth leaving the city on a Sunday.

Located in Takeo province, Tonle Bati is more of a local picnic spot. This where Cambodian families go for a picnic and have barbecues on the weekends. This is also where school excursions take place. You can hardly spot another ‘barang’ there. Given the accessibility and distance from the city center, it is a wonder how the place was not more packed during Good Times2’s visit.

The journey from Phnom Penh takes roughly one hour but it is worth braving the single-lane road despite a handful of potholes on National Road 2. As you disembark from your motorcycle or your tuk-tuk, the view opens into a massive green patch where a handful of local cows feed on. One word came to mind upon taking the whole view in: peaceful. The contrast between the greenery and the sombre river is so striking, it deserves a spot on your Instagram.

At Tonle Bati, everything coexists ever so seamlessly. You can see small children running around, playing together without a care in the world while their mothers and fathers sell goods off of boats along the lake. If the city ever made you feel somewhat suffocated, Tonle Bati is where you can exhale all the accumulated tension and just lose yourself in nature for a while. Here, there is absolutely no rush to do anything.

For a full relaxing experience, rent a floating bamboo hut for just $5. You don’t have to worry about getting food and drinks as there will be a lot of boats passing by your hut, offering an array of local delights , from the classic mee cha (fried noodles) to nom plae ai (Cambodian rice cake) at a fair price. A selection of beverages such as soda, water and beer are available for you to pick from, and you will only be charged for what you consume. Each hut also comes with two to three hammocks, perfect for a siesta on a lazy afternoon.

When the weather gets hot, the waters might seem inviting. It is also normal to see the locals casually swimming from hut to hut. However, it is inadvisable for you to take a dip in the lake. If you still want to get close to the waters, you can politely make a request to one of the boat owners to bring you on a ‘short cruise’ around the lake. For as little as $1 per person, they will gladly oblige with a huge smile plastered on their faces.

It is established that Cambodia is the Kingdom of Wonder, therefore do not be surprised if the boat ride is accompanied by loud Khmer dance music. As ridiculous as it sounds, the locals love it. This is evident in the bright smiles they flashed, as you slowly cruise by the other families having picnics in their own bamboo huts.

One of the most interesting things about Tonle Bati is it encompasses just about everything that Cambodia has to offer – the scenic nature, historical ruins, local delicacies and luscious greens. It is possible to check all of these off your list within just a few hours.

Just a few roads away from the lake is a small Angkorian temple called Ta Prohm. While sharing the same name and architectural features as the popular jungle temple in Siem Reap province, this is not the same Ta Prohm which was also a location for the shooting of Lara Croft’s Tomb Raider. This Ta Prohm is slightly smaller and was built in 1200 by one of Angkor’s most famous kings Jayavarman VII.

Once a sanctuary for Hindu deities, this temple houses several Jayabuddhamahanatha statues. It was reported that Ta Prohm had been a place of worship for the Hindus since the sixth century, belonging to a maritime empire called Funan. This is evident in the design of the temple walls, decorated with illustrations of Hindu myths.

After the fall of the Khmer empire in the 15th century, the temple of Ta Prohm was abandoned and neglected for centuries. Today, all that is left is the remnants of the temple. While people still come to pray, Ta Prohm has mostly morphed into a beautiful background for tourists to take pictures in front of. Tourism Cambodia said in the 20th century, the authorities had decided that Ta Prohm would be left largely as it had been found, as a “concession to the general taste for the picturesque”.

Who says you need to travel all the way to Siem Reap to delve deeper into the cultural and historical heritage of Cambodia? In fact, you can even pay a visit to yet another temple called Phnom Chisor, some 20 minutes south of Tonle Bati.

Phnom Chisor was built in the early 11th century by King Suryavarman I, who practiced Brahmanism. This, however, is not for the faint-hearted. Located on a mountain top, visitors would need to climb 461 steps to reach the temple. Phnom Chiso is very popular with visitors, seeing as it offers a panoramic view of Takeo’s rice paddies stretching for kilometers. 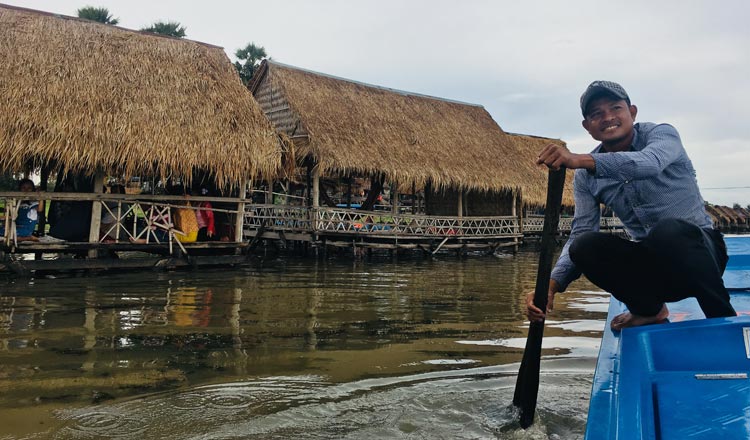 There are a lot of scenic places in Cambodia that are perfect for Kodak moments and Tonle Bati ranks high on our list, simply because of the distance from the city center and what it has to offer. If you have no plans for the weekend, we strongly suggest driving just one hour away from Phnom Penh for a quick retreat that is also budget-friendly.

At Tonle Bati, one day is all it takes to experience the true essence of Cambodia.

In Memory of a “Cambodia” Scholar