Beijing, China – In the face of criticism over perceived debt trap diplomacy set by growing Chinese investments, government officials and academics said the term has been used by western countries despite apparent benefits enjoyed by Belt and Road Initiative member countries.

The term “debt trap” was first used on Sri Lanka in December 2017 after it defaulted on its multi-million dollar loan from China. The island nation handed over its Hambantota Port to Chinese companies for 99 years, and soon the term was used to describe scenarios in other countries that have received Chinese investments.

Fear of a debt trap prompted Malaysian Prime Minister Mahatir Mohamed to rethink two Chinese infrastructure projects. According to the Washington Post, Mr Mahatir said the projects were “too expensive for his debt-ridden country”.

Things are different in other parts of Asia.

Cambodia is one of the staunchest supporters of the BRI. It expects that the initiative will contribute to peace and shared prosperity. According to International Policy Digest, China is Cambodia’s largest economic and political backer.

“Of course, some western countries blamed China – they criticise China with words like ‘debt trap,’” Mr Chen said, noting China’s experience in financing infrastructure projects. “If you want to have development, especially through infrastructure, then you need big investments, [you need to] borrow money to build your infrastructure. This is what China has done in the past in the countryside.”

He said China provides “unconditional” assistance to other countries, including Cambodia. He also dismissed the use of the term debt trap.

“When China helps our neighbour to build infrastructure, I think some countries become jealous and create problems,” Mr Chen said. “The people can judge for themselves.”

According to China’s Commerce Ministry, trade with BRI countries in the past five years exceeded $5 trillion and outward direct investment has reached over $60 billion.

According to Ying Fan, professor of international economy at the China Foreign Affairs University in Beijing, Chinese President Xi Jinping launched the BRI in 2013 as a grand plan for China’s economic integration with other countries.

“With the younger generation in China’s leadership, economic diplomacy with other countries has been receiving paramount importance in China’s diplomatic initiative,” Ms Yung said.

She noted that Cambodia has benefited from being involved in the BRI.

“Basically, I don’t think China wants to ally with just any country in the world,” she added. “Maybe western media lied. China wants to establish good relations with the world.”

Mr Xi said in April during the Second International BRI Forum in Beijing that 150 countries and international organisations have signed BRI agreements with China.

“Cambodia is also in danger of losing the flexibility in charting its own independent foreign policy framework after falling deeper in to China’s sphere of influence,” the report said.

He said the report accused China of “sucking Cambodia into [an] intractable debt trap through massive loans, investment and financial assistance.”

“In fact, the Cambodian government is capable of managing its own economic and financial policies,” Mr Sokveng said. “We have followed a stringent policy in borrowing money from our main donors, including China, Japan, the Republic of Korea, and the Asian Development Bank. [It does so when it is] necessary for our country’s development and economic growth.”

Mr Sokveng said Cambodia’s public external debt to its GDP is only at 21.4 percent. He called the figure “a very low distress level compared to the sustainability threshold of 40 percent”.

“This fact is recognised by major international financial institutions such as the International Monetary Fund, World Bank and the Asian Development Bank,” he said.

Mr Chen said the BRI is a comprehensive plan for its members to boost cooperation. 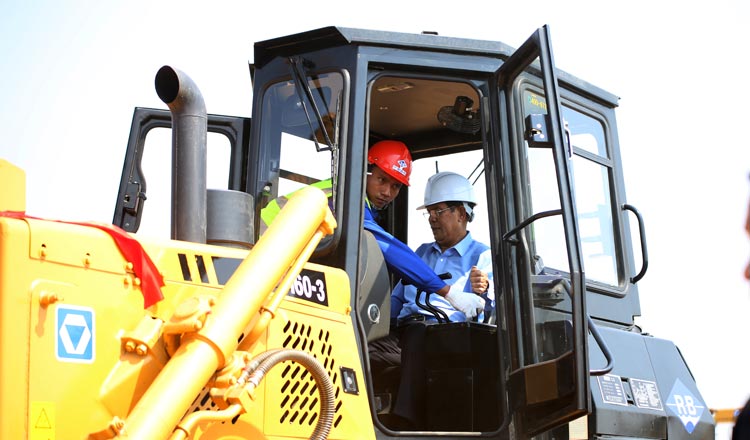 “Over the past six years, we have been focusing on infrastructure [projects]. We call this the [new] ‘Silk Road’,” he said. “We have to build the roads and railways, and trees and industrial parks will follow. There are many countries, including in Southeast Asia, that would like to experience upgrades to their infrastructure.”

CPP spokesman Suos Yara said with the launch of the BRI, Cambodia has become China’s premier partner and beneficiary.

“The success of the BRI depends very much on the quality of the projects and the perception and participation of the local community,” Mr Yara said in July. “Both countries still need to double their efforts to ensure that development projects under the BRI really benefit the local people. People-centred development approach should be at the core of the BRI and the Cambodia-China partnership.”

However, others are less optimistic. Political analyst Lao Mong Hay warned that growing Chinese influence in the Kingdom could lead to undesirable effects.

He noted that Chinese companies constructed almost all of Cambodia’s hydroelectric power.

“Cambodia has made itself more exclusively dependent on China. Its community with it cannot be a community of equals,” Mr Mong Hay said.”

Paul Chambers, a lecturer at Thailand’s Naresuan University, agreed that BRI could bring much greater economic dependence on China.

World City lays down the truth on Camko City