For most artists, music is a form of storytelling. It is a matter of composing a new narrative with notes and melodies, instead of words or sentences. For others, music has to be played to save it from dying.

Anith Adilah Othman speaks with Sokim Keat, a young Khmer who teaches Cambodian traditional instruments to the youths, out of fear that someday his beloved culture will be forgotten.

Sokim Keat has always been fond of the arts. Despite majoring in English, the 31-year-old has dabbled in the music field ever since he graduated from university. He said his passion grew tremendously after volunteering and learning at the Community of Living Chapei for over three years.

Last year, Keat took his passion for the traditional Khmer instruments to another level by opening the first music school in Cambodia that focuses more on the dying art.

“I just got curious. I wanted to know why Cambodian traditional music is no longer widely practiced. I was also wondering why the musicians who play traditional instruments mostly still live in poverty. The numbers of students majoring in Khmer music at the public universities are also very little.

“To me, it is a shame as there is a high demand for traditional musicians especially since Cambodia has a lot of festivals all year round. The market demand is there but not the supply,” he told Good Times2.

Today, he provides informal music education to the youths who share the same passion at his Friends Music School in Russey Keo, some 12 kilometers away from the city center. Due to his full-time job at the Cambodian Living Arts, the school only operates on the weekends.

He said he did not expect his music school to receive much attention, adding that he was so touched after learning that some of his students were even willing to travel up to 50 kilometers just for an hour lesson every Saturday and Sunday. 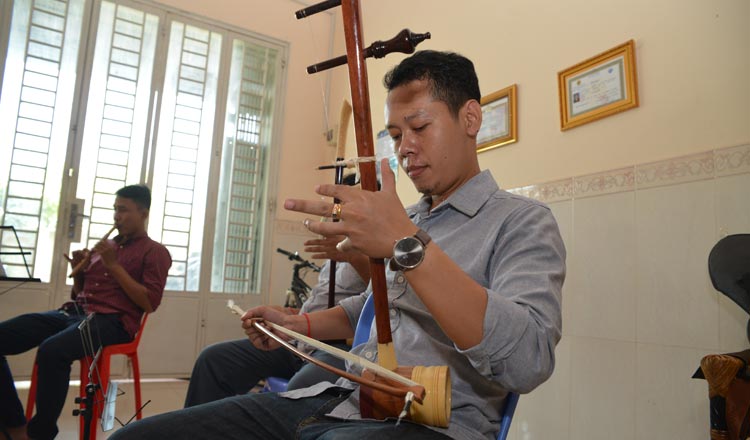 “We always think that people are not supportive of the arts but as it turns out, they just don’t know how to. When I first opened the school, I had expected the first student to be interested in guitar lessons but I was wrong, he opted for a traditional instrument.

“The school is quite far and I can tell that these students are really invested when they are willing to come all the way from Kampong Speu, for instance, just for an hour of flute lessons. I hope our small group will be able to motivate others to push themselves further in the industry,” he said.

Keat, however, admitted there were a lot of challenges initially. These include having limited access to good teachers and the traditional instruments.

“There are a handful of really superb musicians but they are always busy, especially from October to July as it is wedding season and they are booked for performances. When I was hiring, I had to really ask for help from friends through social media.

“Another issue is that the instruments are so expensive. One zither, for instance, could go up to $600 depending on the make and craftsmanship. Understandably, they are not easy to make but the big price tag makes it inaccessible to beginners,” he said.

This has prompted Keat to think out of the box. He said instead of purchasing them at high prices, he had commissioned a good friend who owns a workshop to re-make the instruments in a way that they become more affordable for his students.

“Take a zither, for instance. It costs a lot because the process to make it is so intricate, it requires skillful carving on the outside and on the inside of the wooden block. So we source for affordable materials to rebuild our own zithers. We still keep it in the original form.

“The scale, the sound, the important components are still there. The students are still playing a zither. The difference now is that the zither costs $120, instead of $400. The students can afford to buy one for themselves and bring it home with them to practice.

“Of course some people disagree. I remember this one comment saying that our instruments do not resemble that of Cambodian’s. The identity is still there. To me, what matters most is that the younger generation knows what a zither is, for instance, and what sound it makes,” he said.

Keat said he aspires to grow his music school and recruit more students to keep the Cambodian arts alive. Those interested in enrolling can visit Friends Music School official Facebook page or contact Keat at +855 70 596 076.