Home - The man behind the masks

In Cambodia’s traditional performing art scene, many masters are struggling to pass their skills to the next generation. No one seems to show genuine interest in the performance art. But unknown to most, the craftsmen – the people who make the props for all cultural performances – have the same struggle. It has always been an unending dilemma on who’s going to make the masks for Lakhon artists when their time runs out. Taing Rinith profiles Deth Sovutha, who makes the most beautiful Lakhon Khol masks.

In a house on a big plot of land situated at National Highway 2, 66-year-old Deth Sovutha is working on his workshop table. With a pair of grass shears, he is cutting a sheer of cardboard into very small parallelogramical shreds. No one understands what those are for, until he glues them to a big chunk of cardboard and turns the instalment into a beautiful tiara, which will be used by the performers of Apsara Dance. 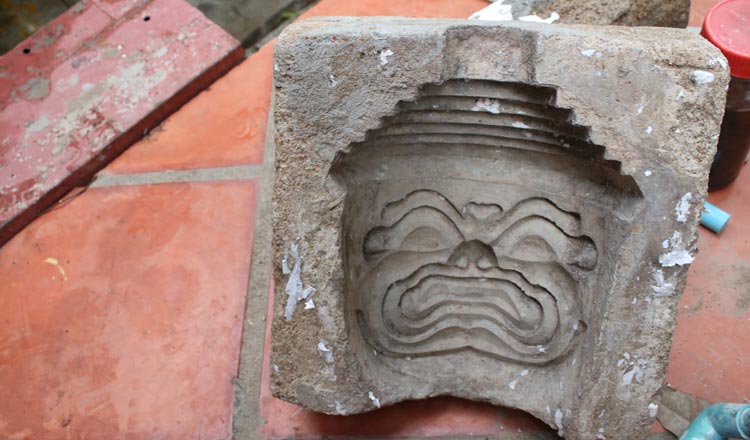 Next to him is a yellow mask of Tosamuk, a ten-faced ogre in Reamker, a Cambodian epic poem based on the Sanskrit’s Ramayana epic. About one month ago, a Lakho Khol artist asked him to make the mask, which he would use for future performances.

“As you can see, Tosamuk has ten faces,” Sovutha says. “Four of his faces are at the back of his head. How does he sleep? By closing his eyes, of course.” 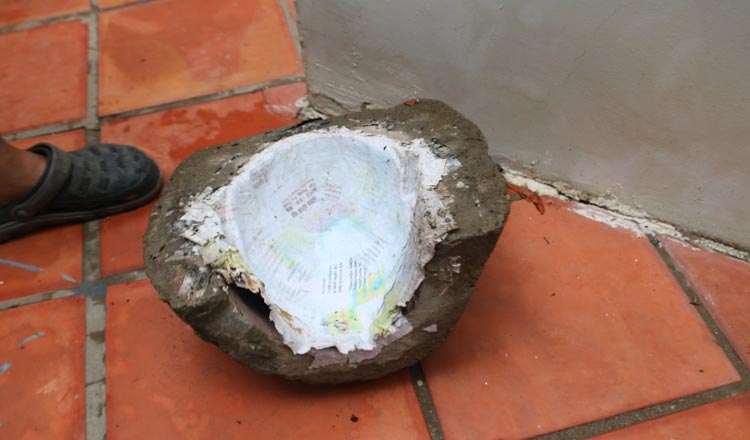 “Yes, that is a joke, but of all Lakhon Khol masks I have ever made, this is the most difficult one.”

The process of making a Lakhon Khol mask is long and tedious. It starts with making a mould for the main structure of the head from soil and then make the head from paper or cardboard. After that, it has to been painted and decorated with kbach or stylish patterns, so that he could reflect on the character it represents.

“In Lakhon Khol, characters are distinguished by their colour and their nature,” Sovutha explains. “For example, Hanuman is a white monkey while the mask for Lord Rama resembles a green human head.” 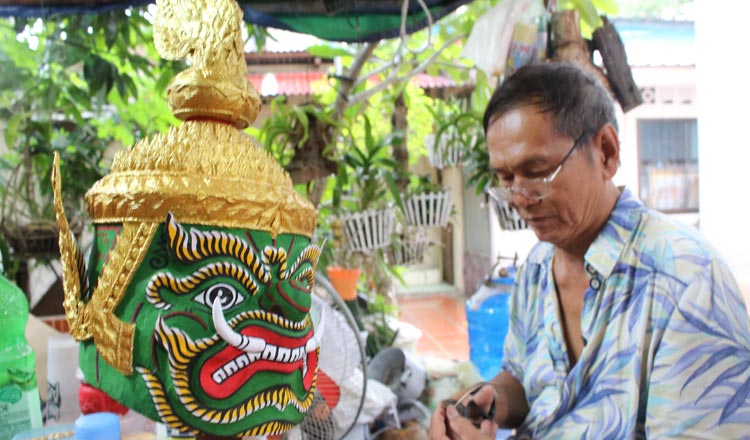 “Yet, different scenes also require different masks that show the characters’ expression and feeling. That is why making the mask requires a precise understanding of facial anatomy.”

The masks and tiara are not the only things Sovutha can make. He can craft many other beautiful things, including the leather puppets for Sbek Thom, a kind of Cambodian puppetry, and Khmer-style trophies for competition. The public may not know him, but those who work in Khmer traditional art scene recognise him as one of the country’s top properties man. He is also the only master of his generation to be still active, despite his age.

In 1953, just a few months after Cambodia was freed from French Administration of Indochina, Deth Sovutha was born in a poor village in Kampong Speu. Several years later, his father passed away, leaving him, his two siblings and his mother in financial hardship, and Sovutha had to go and live with his uncle. Life was hard for the young Sovutha, but he always found a way to escape from reality sometimes: crafting subjects of beauty. 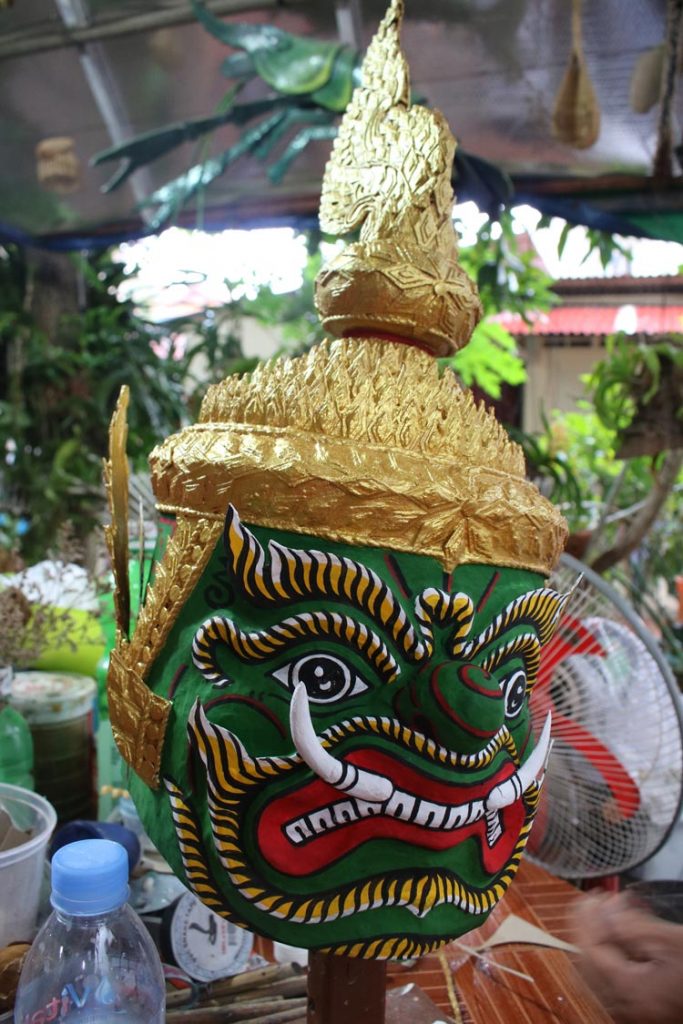 Sovutha loved to create small figures from clay or wood and sketch beautiful paintings with his pencils. Noticing his nephew’s talent, Sovutha’s uncle urged him to apply to École des Arts Cambodgiens (School of Cambodian Arts), founded by French Cambodia scholar George Groslier. He chose to study the Art of Moulding, the least popular discipline at that time.

“Almost no one liked this major because it requires them to work very close to heat almost all the time,” Sovutha says. “Many of my classmates dropped out because they could not stand being burned, but I was there until the end because I love creating beautiful things.”

Sovutha graduated in 1974 with honour and was later recruited into the Department of Performing Art of the Ministry of Fine Art as a properties man. Unfortunately, just one year later, his worst nightmare arrived when Khmer Rouge came into power on April 17, 1975. Like other Phnom Penh residents, he was evacuated to the countryside, where the ultra-Maoist group dreamed of turning into a capitalism-free utopia.

“My hair was so long at that time, almost like a hippie,” Sovutha says. “On the way, when I heard that the Khmer Rouge soldiers were killing those with long hair, I asked someone to cut mine. Since then, I have always kept my hair short.”

During Khmer Rouge, Sovutha was living in an area in Pursat, notorious for claiming tens of thousands of innocent lives. There, he witnessed the killing of many artists, including his classmate. He was able to survive because a friend of his, who had learned about Khmer Rouge’s atrocities, told him to “shut up or die”.

After the end of “darkest age of Cambodia”, Sovutha returned to Phnom Penh and resumed his work as the properties man for the Ministry of Fine Arts. For years, he had been assisting masters and mistresses, who were struggling to teach the pale and malnourished Cambodian children to perform the classic dances, in reviving the art scene in Cambodia by crafting all kind of tools and equipment for their training and performances. He was also responsible for supervising the preparation for performances – from stage set-up to lighting.

Among those masters and mistresses are Yit Sarin, the first male dancer in Cambodia’s Royal Ballet and was the last custodian of the knowledge, history and practice of the Khmer masked theatre dance, and Em Theay, currently the last surviving mistress of the Royal Ballet. Sarin, who passed away in 2017, and Theay are well-known and respected among the public, especially since both performing arts were inducted into UNESCO Intangible Cultural Heritage Lists. Yet, not many know Sovutha, who was the man behind the stage and the masks.

“Sovutha also deserves to be recognised as a living heritage,” Theay, now 87 and still passing her skills to young students. “He has been working tirelessly with us for the revival of Cambodia’s traditional art after Khmer Rouge regime.”

Sovutha, however, says he is more than satisfied with his life because unlike many people, he has been doing something that he really likes and he has contributed to the society.

“Thanks to my work, I have travelled to so many countries, including the United Kingdom, to assist in performances,” he says. “I am so happy whenever I see the artists wear what I have made for them, showing their skills in front of an international audience.” 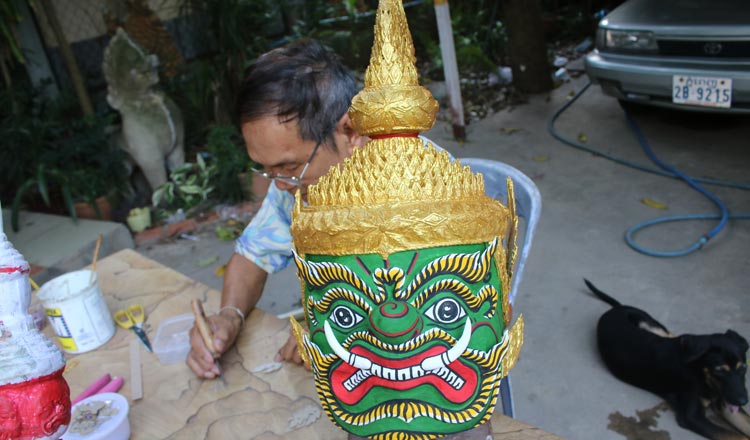 People still ask Sovutha to craft beautiful subjects, despite being retired for years now. For a Lakhon Khol mask which he spends one month on creating, he could only earn about $120. His skill has not made him rich, but the craft master says he is rich…with happiness.

“Sometimes, neither fame nor money defines happiness,” he says. “For me, following my passion, which could also benefit others, is real happiness. And I am even happier when young people today are working so hard together to continue our work”

“To be able to make beautiful things is enough for my life.”

Save up Your Fortune