A large part of the lives of indigenous people in Cambodia remains unknown to the public. Interested people usually try to understand them through studying their “unique” traditional rituals and life events. Their culinary identity, however, is yet to be thoroughly explored. Many think that indigenous people only eat wild food. But Taing Rinith discovers the culinary wonders of indigenous people through a restaurant in Phnom Penh.

Lak Sok Em, 35, was born and raised in an underdeveloped Kreung ethnic community in the north-eastern province of Ratanakiri, where the indigenous people have been living in a primitive way of life for generations. Yet, Sok Em refused to be ignorant of the outside world and wanted to improve her community. So she studied and worked hard until she became an important official in an non-governmental organisation.

Living and working in Phnom Penh for years now, Sok Em always misses the simple and quiet life in her home village, especially its traditional food. Her favourite dish is Janang, which her mother usually cooked for the family and could be described in a simple way as “a pork soup with bamboo shoots and Thai eggplants”.

“It is a signature dish enjoyed by indigenous groups in Cambodia, including Kreung and Tumpoun,” Sok Em says. “It is difficult to make it in Phnom Penh because the recipe contains Janang leaves, which could only be found in the north-eastern provinces.”

In April 2017, Sok Em was very happy when she learned that Yun Mane, a friend and colleague of hers hailing from Phnong indigenous village in Mondulkiri’s Pech Chreada district, opened a restaurant near the Russian Market that serves indigenous peoples’ food to city residents. It is the first and the only one in the capital.

Like Sok Em, Mane dreams of a better life for indigenous communities, and for years she has devoted much of her life to protecting and promoting their cultures and identities. Opening the restaurant which was known initially as Ptas Bay Chun Cheat Doeum (Indigenous Peoples’ Kitchen), she believes, can help provide work for indigenous people as the restaurant has also opened the market for their communities to sell products to city dwellers.

“I remember one day during my childhood, my family had to eat bamboo shoots we found in the forest instead of rice, because we did not have a single grain of rice in our house, but many families in our [Bousraa] village were living the same way like us,” Mane says.

“The restaurant industry in Phnom Penh is highly competitive, and I could lose money investing in it,” Mane says. “But, the main reason is that I want to promote my Phnong and other indigenous groups’ culture and identities. My husband, whose mother is Kuoy, and all my friends strongly support this idea.”

However, it was easier said than done. After two years, Mane found herself so busy with promoting indigenous right and opportunities that she does not have the time to run her restaurant. Fortunately, before it started falling apart, Ptas Bay Chun Cheat Doeum was sold to Kong Sine, a friend of Mane and a chef with plenty of culinary experience. Its name was later changed to Janang, after the signature and most popular dish of the restaurant.

“We want to make it a successful franchise,” Sine says. “We renovated the restaurant, giving it a more modern décor and added more dishes and drinks to the menu.”

“If our clients do not want our indigenous dishes, they can order simple Khmer food. However, we still buy our ingredients from the indigenous groups.”

Diners can order a serving of Janang with rice for $2.50 or Janang with noodle, which is a bit saltier that than the former, for $3.00. Other popular dishes Pi-pea ($2.50), a Phnong stew consisting of beef and offal along with wild vegetables, Bok Langor ($2.50), a flavourful pounded fish with black sesame and lemon grass, and Trouy Banlei ($2), a chicken soup with wild leaves and vegetables.

To wash down your food, the restaurant recommends the famous Sra Peang, indigenous wine stored in earthen pots. Meanwhile, a teetotaller should order a glass of avocado shack, made from the naturally-grown fruit from Mondulkiri.

When asked to differentiate indigenous cuisine from Khmer cuisine, Men Srenpean, the Tumpuon chef at Janang, says it is the “sweetness”.

“While we put sugar in Khmer dishes, the sweetness [for us] is drawn from vegetables in our dishes,” he says. 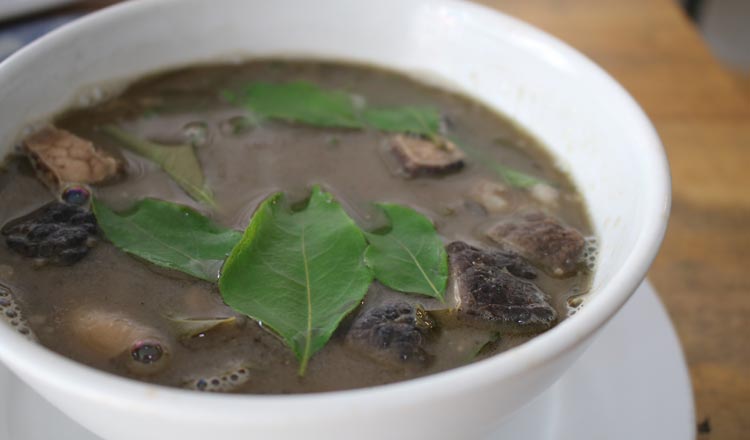 Sine, the new owner, says he hopes more and more people will come to his restaurant to have a rare taste of the culinary heritage of the Kingdom’s ethnic groups.

“Most of our clients are those who had lived in the north-eastern provinces, who loved the dishes all their lives, or expats who prefer exploring new tastes,” he says.

“But I am sure that Cambodian people in general will learn to like our dishes. They only need to open themselves to new things. ”