A woman suspected of killing her friend and chopping her body into small pieces before packing them in plastic bags that were thrown away in different locations appeared at Phnom Penh Municipal Court yesterday.

The victim was identified as Kim Yaneang, a 40-year-old hair dresser living in Tuol Sangke commune. The victim, who was friends with Ms Sophal, was a widow with one daughter.

The suspect allegedly cut her body into small pieces and put them in black plastic bags that were thrown away in separate locations, including into the Mekong river, on June 3 over a $700 debt.

Lt Gen Sreang yesterday said Ms Sophal was sent to the municipal court for questioning after military police finished interrogating her, during which she confessed and explained how she killed the victim.

“According to her confession, no other person was involved in the victim’s murder,” Lt Gen Sreang said. “She alone killed the victim.”

“She confessed that she killed the victim because she was angry with the victim, who threatened to report her to the police, or reveal where she lived to other people who she owed money to,” he added. 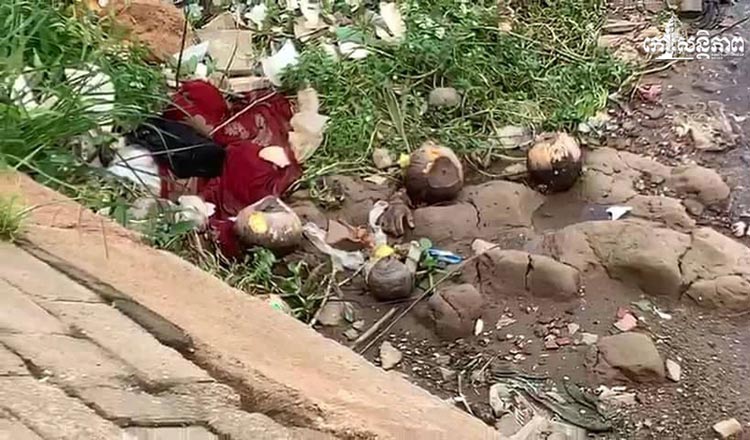 Phnom Penh Municipal Court spokesman Ly Sophanna yesterday said that the suspect is still being questioned by a prosecutor.

“The prosecutor is currently working on the case,” Mr Sophanna said.

According to a military police report, Ms Sophal said she had been unofficially married six times and was separated from her most recent husband before she was arrested. Three of her ex-husbands were Cambodians while the remaining three were foreign nationals.

Ms Sophal confessed that on the day of the victim’s murder, she and the victim were drinking beer at her rental house in Chey Chumneas commune.

When they got drunk, the victim started demanding the $700 that Ms Sophal owed her. However, Ms Sophal did not have any money to repay the victim.

They got into an argument, during which Ms Yaneang threatened to report Ms Sophal to the police or reveal her home address to other people whom she owed money to.

Ms Sophal confessed that during the argument, she hit Ms Yaneang on the neck with a big stick until she was unconscious, and then strangled her to death.

After killing the victim, she took a cleaver and cut the victim’s body into small pieces to put into black plastic bags that she temporarily kept inside her house.

Ms Sophal noted that at night, she carried the bags and disposed of them in different places; some were thrown in garbage in Daun Penh district and others into the Mekong river near the Royal Palace.

After throwing the bags away, she returned home and pretended to know nothing. Military police then arrested her on Monday.