Home - One idol, many roles

One idol, many roles

Turning 29 this year, Oun Batham – or better known as Sai – is already widely popular among Cambodians, especially among the young ones who love original Cambodian songs. His greatest hits, Sarapheap Sne Tam Kjol and Ngob Ngol, have become ‘national anthems’ of couples and the brokenhearted.

But behind his success as an artist, Sai portrays many roles in real life. And he’s inarguably good at all of them. 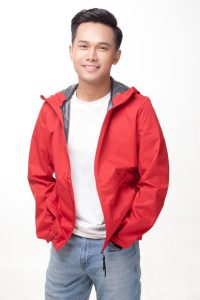 In 2008, Sai has just graduated from high school. But he was more enthusiastic to learn how to play guitar. He never thought of himself as a singer or a songwriter, but he knew he wanted to play the instrument. So he strived to learn.

“I was always moved and inspired by those who sing on stage. Then I learned to play guitar and composed songs on my own without thinking that I can be famous one day. Back then, I was wondering why some productions copied melodies from other countries when we can do it by ourselves.”

Aiming to become part of the solution, Sai talked with his friends and explained what he wanted to do.

“I shared this problem to my friends. Holding strong commitment and efforts, they hosted an event called, ‘Meet Sai at Chinese House’, allowing me to share the importance of creating and singing our own songs. I remembered that people were not used to hearing until we had some programmes as ‘Songkites’ and ‘I am Original’.

After failing in SongKites Season II, people noticed and called me to write songs. I wrote two songs with Ma Chanapanha for a production entitled ‘Will you be my girl?’ and ‘My senior my crush’ . That’s how my journey in this industry officially started.”

In 2013, when Cambodia’s political situation wasn’t too stable, Sai wrote and sang ‘Khmer Help Khmer’ as his way of motivating the people of Cambodia to be united. It was through this song that Sai became a household name.

He continued writing inspiration songs after that.

Now, he’s preparing new songs for his fans. He said it will be worth the wait. 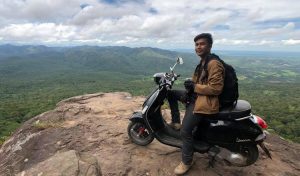 Aside from performing up on stage, Sai is also a “performer” in the farm. Yes! He owns a farm in Ratanakiri province which is filled with different kinds of fruits. He personally manages it and plants fruits. He said that he started planting since he was young, even before he became a public figure.

He revealed that it was his love for the environment and nature that pushed him to become a farmer. “Managing people is not part of my favourite things to do. This is why I choose to live with nature and grow my own fruits.”

But with the agricultural and industrial setbacks Cambodia is currently facing, Sai admitted that his farm is also affected.

“There are two main problems that I always face: natural disaster and low market opportunity. Sometimes, storms destroy my plants. And when the harvest is good, the price on the market is really low. But I am not a quitter. I found a solution to these. We, as farmers, should have basic knowledge on different planting techniques and we should plant various kinds of fruits and vegetables that fit the climate. For instance, if pepper’s price goes down, we have other fruits to sell. At least it will help farmers sustain their productivity chain.” 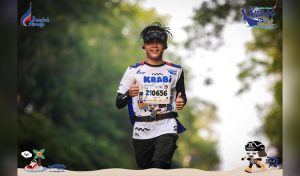 Aiming to promote local sports and to make sure that he is healthy, Sai is now involved in running. Even with his tight schedule at the university and on his career, Sai always spares a few hours to play basketball and join marathons. He has already taken part in a dozen marathons both within and outside Cambodia.

He said that keeping himself fit and healthy is a good investment, especially in a career like his – hectic schedule, less sleep, stress, changing lifestyle. He acknowledges that even going for a 30-minute run is a challenge for him, but he keeps reminding himself that if disregards his health now, his older self will suffer. And with everything that’s on his plate, he said he can’t afford to be sick.

“I’ve been running for years now. I’ve run from the shortest to 21 kilometers. After joining many marathons in Thailand, I now try harder competitions. I’m preparing for 42-km marathon soon. And on June 16, I will be joining a half marathon in Phnom Penh.” 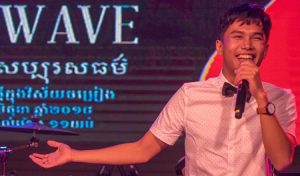 When Sai performs on stage, his vision is not to only entertain people. He said he wants to inspire people to dream big and follow their passion. This is why he easily agrees to perform for charity concerts or events which causes are close to his heart.

“Sometimes I get invited for two events in a week. Though my schedule is really packed, I still take time to perform in those events and share some encouraging messages to the audience.

“There are times, too, when I serve as inspirational speaker for different topics. It makes my heart swell with happiness when I know I’m inspiring people.”

And whether he’s singing on stage or speaking in front of young people, Sai said he pours his heart and soul.

“It’s not really hard to be a good person. If you behave well, that’s enough for you to become a good member of the society.”

I am just fortunate to have been given the platform to do good and be good for the benefit of my fellowmen.

Support vs Demand: How parents and students can bridge the gap