Home - MUSIC FOR THE SOUL

MUSIC FOR THE SOUL

“Music is the universal language of all mankind,” says master poet Henry Wadsworth Longfellow. Regardless of the differences in language, rhythm and tone, music elicits common emotions in all of us – sensations of joy, sadness, tension and hope.

Living with this same belief, Japanese musician Miwako Fujiwara has dedicated her life into music and inspiring others through it. On Sunday last week, Fujiwara led an awe-inspiring charity concert with the core purpose of helping two organisations that are pushing for the same hopeful advocacies as hers.

Beautiful classical contemporary music echoed beyond the walls of Sofitel Phnom Penh Phokeethra as Musica Felice showed off their singing prowess. In this year’s charity concert, the group magnificently synchronised with sensory-impaired children, creating a performance that goes beyond music. It was a proof of harmony, unity and pure love.

“It has always been my happiness to bring back the charity concert of Musica Felice. The children and the talent of musicians in Cambodia continue to motivate me to use my passion in bringing different beautiful sides of classical music that will fit into the culture here,” shared Fujiwara, who obtained Docent Musicus diploma at The Hague’s Royal Conservatoire in the Netherlands.

Musica Felice was formed in 2016. The choir consists of a mix of professional musicians and non-professionals from all parts of the world. Although they come from different countries, backgrounds and professions, they all have one thing in common – deep love for classical music. With the aim of giving assistance to two organisations: Krousar Music and Light of Mercy Home, Musica Felice poured all of their passion and talents in performing breathtaking pieces from the sacred to the secular including music from the renaissance, early baroque, classical and romantic periods. Each piece received sounding applauses from the audience. 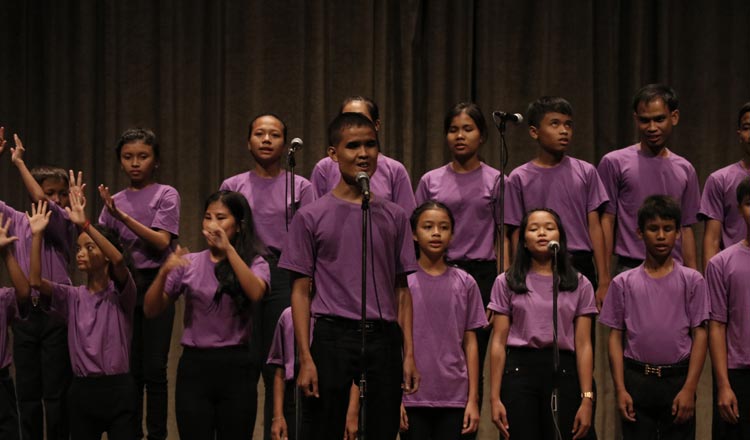 “All of these children and people here are the core source of motivation that led me to conduct this performance. I am so happy that I saw how wonderful these children are in music and I cannot wait to see them grow up and walk on to their bright future of becoming great musicians,” shared Fujiwara who served as choir conductor and composer.

Inspired by the works of Karl Jenkins, the choir collaborated with sensory-impaired children to experience and create a classical, vibrant music that speaks to the soul.

Every single in the person was mesmerised by the amazing classical performance of the choir, composed of different nationalities – French, Russians, Americans, Japanese, Filipinos and Khmer, all of them pouring their effort in the performance to bring wonderful classical contemporary music together.

And through the blending of traditional Khmer instruments with Western classical music, the performance had created a special connection with Cambodian culture. 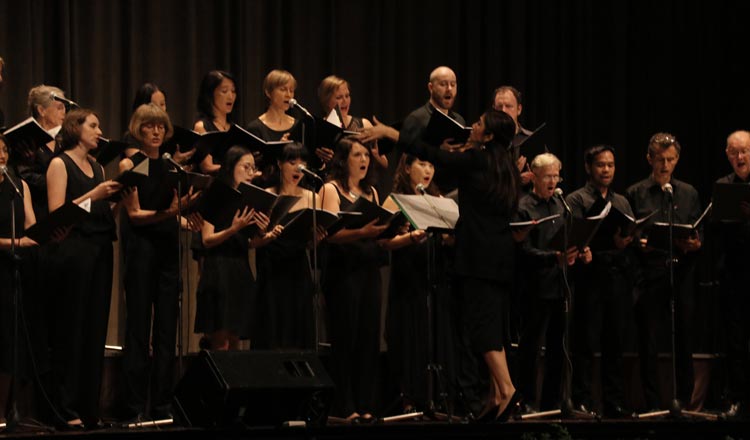 Khmer musicians proudly played tro, pin, roneat, korng, khloy and other traditional Khmer instruments up on stage and performed together with the choir, along with the pianist, Etienne Chenevier, creating a wonderful feast in every listener’s ear.

“The combination of the West and the East is a creative product that I discovered when I saw the potentials of both Cambodian traditional and western classical musicians. Despite the differences of the instruments we played, we all created one, unique sound.”

Tola Say, the founder of the music school, addressed that his team was overwhelmed to have worked with Miwako Fujiwara and received assistance from Musica Felice. And it was also a great opportunity to showcase traditional instruments to a huge audience, said Tola Say.

“Having been on the stage with these great musicians has always been my great honour. Despite the racial and cultural differences, we share one common value, and that is our love for music. We all believe that through music, people will be more united.”

“Not many people realise the fact that our Khmer traditional instruments can perform in so many different types of music, even the classical one, for instance. Therefore, the charity concert of Musica Felice can be a great platform to display the potential of Khmer traditional instruments as well as to show how Western and Eastern music can be combined into one great sound for everyone to listen,” added Say Tola, an expert in tro sao.

All funds raised from the event will be used to provide opportunities to talented young musicians who would otherwise be unable to afford music tuition.

The Farm-to-table movement is here