National Police yesterday arrested a man suspected of raping and killing two children last week in a case described as one of the most brutal homicides investigated in Preah Sihanouk province.

“The suspect was arrested in Prey Veng province and our police officers are now working on the case in accordance with the law,” Maj Gen Narin said. 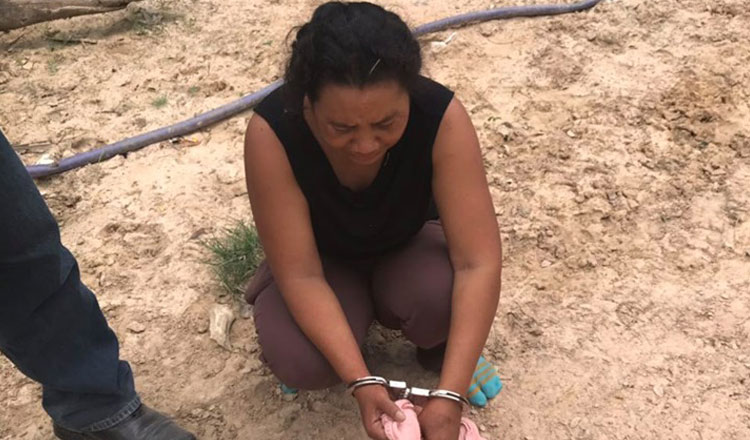 “We arrested two people – the suspect and his wife – and right now they are on the way to our department to be questioned,” Lt Gen Chuo said, adding that both will soon be handed over to police in Sihanoukville.

Last week in Prey Nop district’s Bit Traing commune, the bodies of 10-year-old Pha Srey Leak and her two-year-old brother Pha Sok Ly were found in bloody pools in their home by their father after he left them alone.

A nationwide manhunt was then launched to find the man suspected of being behind the murders, described by the Child Protection Unit – which works with the National Police – as “one of the most brutal homicides” it ever had to investigate.

“The brutality of this furious attack is beyond words and has shocked some of the most seasoned homicide investigators,” CPU said in a statement last week. “It is incomprehensible the level of violence used on these two innocent children.

However, he was quoted by the National Police’s website identifying Mr Vichet’s wife as Sam Soriya and noting that they lived in Mesang district’s Prey Romdeng commune.

The Child Protection Unit did not respond to a request for comment yesterday, but noted on Facebook that the suspect attempted to evade capture.

“After days of searching, task force members and National Police officers stormed a house in Prey Veng and arrested the wife of the suspect,” CPU said. “The male suspect fled to the roof.”

The post said Mr Vichet claimed he was drunk and unable to control himself. He told police he was raping the 10-year-old girl when her two-year-old brother walked in on them.

“So he slapped the boy two times and kicked him to the wall, causing him to die,” police said, noting that the suspect then killed the girl.

In a video uploaded to Facebook by a police official, the suspect apologises for the horrific crime while being questioned by Prey Veng provincial police prior to his transfer to National Police.

“I am sorry; I got drunk, and if they were my kids, I would also be in pain,” the suspect says in the video.Pha Sros, the victims’ 25-year-old half-sister, yesterday said she is happy police arrested the suspect.

“We regret the deaths of my relatives. However, I am happy to learn that the suspect was arrested,” Ms Sros said. “I ask police officials to please penalise him because what he did was brutal.”

Ms Sros added that a funeral for her siblings will be held on June 4.

In March, Prime Minister Hun Sen considered capital punishment for those found guilty of sexual violence against children. However, a day later, Mr Hun Sen shifted his stance on the issue after receiving legal advice.

“We have seen the abuse of children and women – it is very brutal, especially when it comes to children,” Mr Sam Ath said. “We call on parents to look after their children.”