It’s a common dilemma for most pet parents to find a good café that welcomes not just them but their pets as well. And it seems like the newly opened Zoo Café at Phnom Penh’s Toul Tompoung is the right venue for both coffee lovers and pet owners to enjoy a cozy afternoon. But here’s the highlight: true to its name, Zoo Café also houses over a dozen animals personally owned by the café founder. Agnes Alpuerto learns about the origins of the animals and the story behind the owner’s love for these creatures.

Nay Sokhonra is a certified pet lover. In his home in Toul Tompoung area, dogs, cats, birds, little monkeys and other kinds of beautiful creatures abound. He had them since he was a little child – all thanks to his dad who is also very fond of furry animals. “I basically grew up with animals around me. There weren’t too many, actually, but I have always seen my dad happily feeding our dogs, birds and fish. When I grew older, I also wanted to have my own,” shared Sokhonra, who is more commonly known to friends as Bee.

But as the 26-year-old’s animal family grew both in ages and in head count, Bee decided to create a special space for them.

Thus, the birth of Zoo Café.

At the corner of Streets 135 and 432, a few blocks away from the Russia Market, stands a two-storey building, painted mostly in white with some zebra prints at the door frame – a hint of what to expect inside.

Upon entry, one can easily smell the aroma of great coffee. But the gray-brown-green furniture and the jungle-painted wall at the left most part of the café would easily give away the fact that Zoo Café is, in fact, a mini zoo and a café rolled into one.

“About three or four months ago, I really thought of giving my pets a bigger space for them where they can play. Our home is getting crowded so it’s not really suitable for them. So, when I learned that this space had been vacated by the original owner, I immediately grabbed it and decided that this will by my pet’s happy place.”

“Many people would think that I am using my pets to earn money, for marketing. That’s definitely not true. These are my pets. I took good care of them for years. I really just want to give them their own place. Making them available for public’s sight is actually just secondary. The café is just secondary. This is my pets’ home.”

At the left side of the counter is a four-metre glass cage with three marmosets – species of New World monkey that have primitive features. All at about three years old, the marmosets enjoy climbing on small bamboo bridges and poles Bee built for them.

The marmosets were bought from Thailand three years ago, when they were still very young and were only about two inches tall. Bee shared that he bought his first marmoset in 2013, but it fell ill and eventually died just days after it reached Phnom Penh. 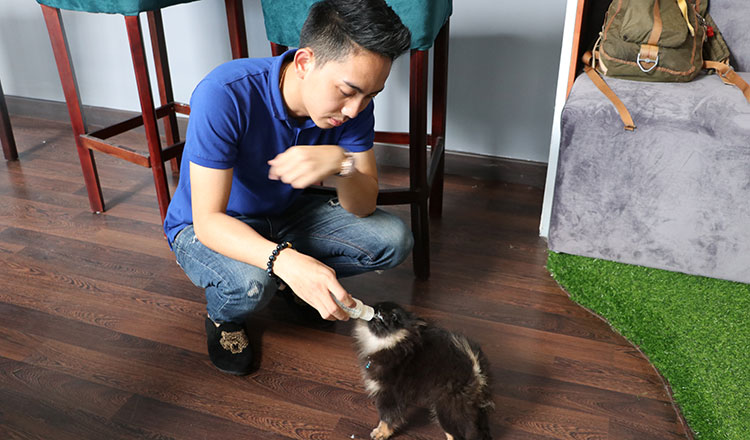 “I really felt upset and mad that the vendor in Thailand did not tell me that the marmoset is sick. I went to the veterinarian and they didn’t even know what animal it was. So, I did my own research, scanned through books and online sources so I can take care of them myself,” explained Bee, noting that the animals are vaccinated and free from all diseases that may affect the people getting near them.

Like the marmosets, all the animals Bee owns are bought from Thailand since they are not a very common sight in the country. He searches for the kinds of animals that can live under Cambodian weather and temperature and checks out pet shops in Bangkok.

Bee said he takes extra caution when choosing the animals he buy, so as not to jeopardise both his life and the animals’. He goes to farms in Bangkok and spends effort and time to learn everything he needs to know about the pets – what they eat, how they react with people, how they deal with other animals, how they’re cleaned, what living conditions suit them, how long they would live. 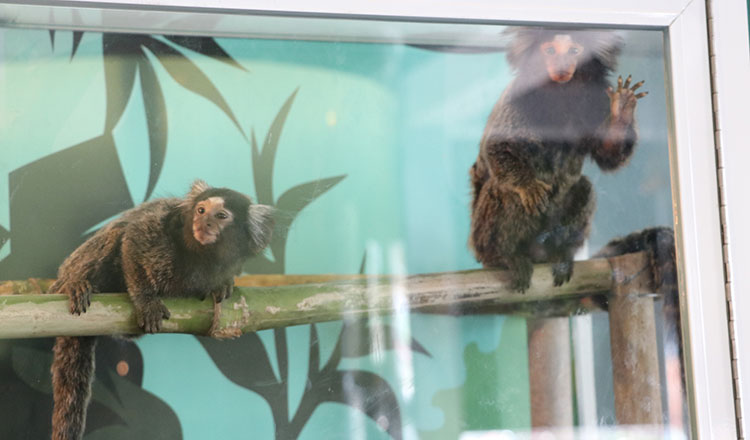 “The list of questions can go on and on and on. And the time to take care of them also goes on and on. But I am not tired. I am happy when I feed them their food. When you love what you’re doing, there’s happiness.”

Up on the second floor of the café live most of Bee’s pets. Different glass cages are set on one corner – two guinea pigs and three jerboas inside one glass enclosure, three Richardson rodents in another and three chinchillas in another glass. Their casings have different temperatures and are big enough for them to move freely. Small water containers, which are constantly filled-up, are placed inside the enclosures so the rodents stay hydrated.

In a cage on the floor lie four white and brown rabbits. Next to it is a green basket with a small pug inside. A brown Fennec fox, a six-month old Pomeranian and a black raccoon roam somehow freely on the floor, with one of Bee’s staff following them everywhere. 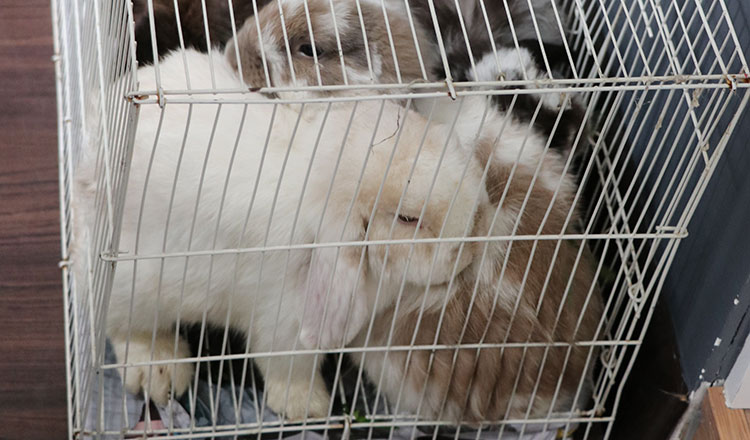 The highlight of Zoo Café is its glass playroom, about three by four metres big, at the center of the floor area. Inside, customers can have the chance to play with the animals of their choice for a few minutes. A maximum of three customers at a time are allowed inside the playroom so as not to stress out the animals.

Sey Sokheng, a dog-lover himself, visited the café twice since it opened on June 15. He said the presence of such place, where people and animals interact, is a great addition to the many things Phnom Penh can offer to the public.

“I really like to come here and be with the animals inside the play room. I like to play with the dogs and the fox. It’s really amazing to see them running and playing around,” said Sokheng. And as Sokheng played with the animals inside the glass, a green lizard was added in the playroom, placed on top of the scratch post – considerably reachable by the bigger furry animals.

“Look, they don’t touch the lizard at all. They’re all friends here. They don’t fight – well, they sometimes do but not as serious as street animals do,” said Bee as he signaled the end of the ‘play time’.

Bee, a Law graduate at the Royal University of Law and Economics, shared that the reception of the people, locals and foreigners, have made him believe he made the right decision to put up the café. 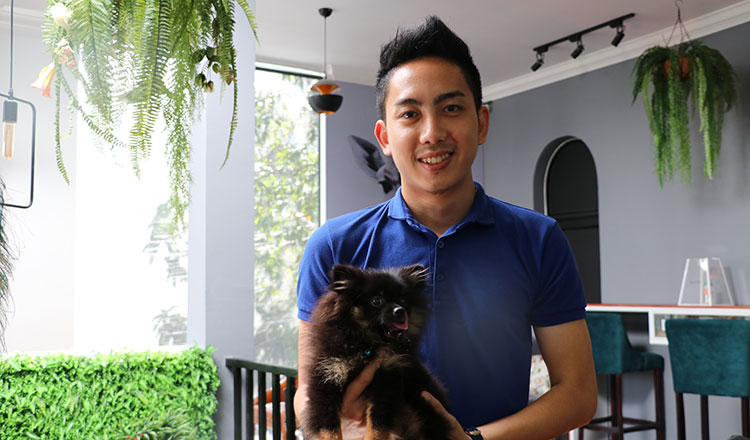 Since its soft opening, dozens of people come every day to see his pets and inquire about how they can also get their own marmosets or fox.

He hopes to add more animals soon. He said another species of monkey and a cockatoo will be great additions to his pet family and to the café.

“But yes, before I forget – this isn’t just a zoo, this is also a café where you can enjoy coffee, smoothies, juices and pastries. Our prices are similar with the other cafes around here. So the sight of the animals is totally free. It’s a treat, I should say for the people who also love and value animals like me,” said Bee, serving the café’s best-seller Zoo Oreo Frappe to his interviewer.

The lady is a BOKATOR FIGHTER

A balanced diet for your pet