For a show that fronts animals, BoJack Horseman is one of the most human shows out there.

This Netflix original, created by cartoonist Raphael Bob-Waksberg, portrays a first-world setting where no one feels like they’re living their best lives despite it all. BoJack Horseman is a show that uses watercolour animation and cast of anthropomorphic animals and humans to create a surreal alternative universe that merges bleakness and joy.

Since the cartoon series first came out in 2014, it has gained viewers and fans who enjoy the show’s clever animation, a balance of sly humor and dark themes with an honest exploration of the human condition. BoJack Horseman is also a complex look on what it means to be happy and how the choices we make can have a profound, rippling impact on others.

BoJack Horseman is a meditation on the glamour of Hollywood, celebrity life, current social issues, and finding contentment. Set in a satirical version of Hollywood, which is called “Hollywoo” (after the ‘D’ is stolen from the sign), we get to follow the life of BoJack Horseman, a washed-up actor best known for his 90s sitcom Horsin’ Around – a show about a talking horse-man with adopted human children. It’s the show that brought BoJack success in the form of fame and fortune but not happiness.

Like every stereotypical picture of anyone who was once-famous, BoJack faces substance addiction, probing existential anxiety and depression – although not exactly clinical – that also seems to affect the happiness and well-being of anyone in his life. Twenty years after his sitcom was canceled, we join BoJack on his attempts to revive his career and achieve happiness.

BoJack Horseman has a strong central theme of sadness. Like many other comedies (animated or not), the show draws humor from several miserable sources. Its themes revolve on toxic personalities, self-deceit, and the failure in finding fulfillment. And the show has achieved a perfect balance on the exploration of sorrow and humor with real musings about life. This is where the show BoJack Horseman truly excels. 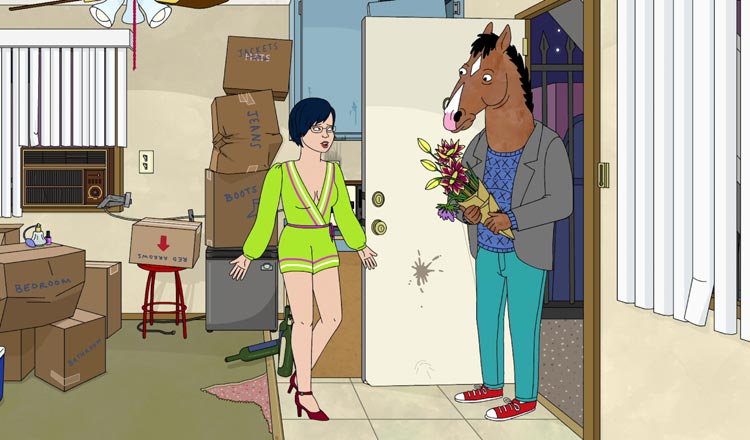 Since its conception, BoJack Horseman’s greatest strength has always been its ability to seamlessly mix humor with genuine emotion, most of it is all thanks to its characters. The show has a good grasp of how its characters try to make sense of personal trauma. It shows the quirky yet real ways on how different people react to many uncomfortable situations: some through humor, passivity, optimism or complete immersion in the gravity of the situation. It is through the balance of cynical and positive characters in which the show addresses dark themes.

Three of the show’s five principal characters, BoJack Horseman (Will Arnett), a former star; Diane Nguyen (Alison Brie), a sardonic writer; and Princess Caroline (Amy Sedaris), a hotshot agent who aims to be a mom are cynics who grapple with the show’s central theme of sadness. Todd Chavez (Aaron Paul), a notable slacker; and Mr. Peanutbutter (Paul F. Tompkins), a sitcom star, are overwhelmingly positive to the point of naivety. 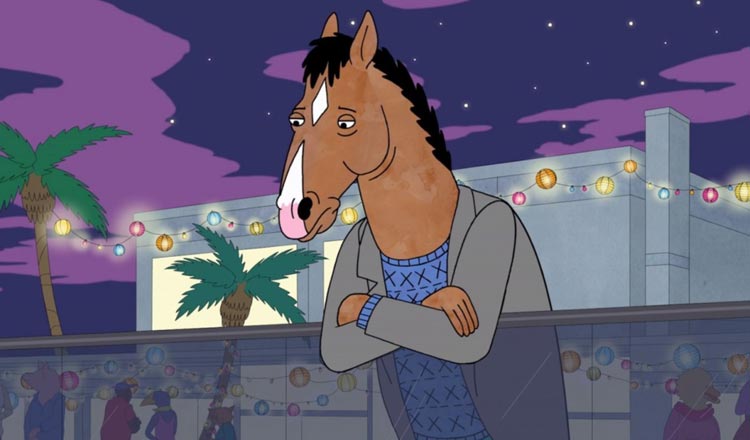 As star-studded the voice cast might be, it’s the quality of the storytelling and dialogue that keeps the viewers sticking around for five seasons and running. The series’ brand of humor may not be new to fans of Family Guy. But I’d have to hand it down to the writers of BoJack Horseman to create dialogues that are witty yet grounded.

One of BoJack Horseman’s first high points is in establishing the relationship between BoJack and his memoir ghostwriter, Diane Nguyen. As BoJack works with Diane to write his memoir on the entirety of the season, he’s forced to reflect on his past and, more importantly, his present.

“Do you think I’m a good person, deep down?”

“That’s the thing,” Diane tells him, “I don’t really believe in deep down. I kind of think all you are is just the things that you do.”

BoJack Horseman on the surface looks like a show that can never be serious, but it hits your feelings hard when it needs to be, and it hits you in places and you never expected to. And it is, for this reason, you will appreciate the entirety of the series. For instance, the character of Todd Chavez is, for all his intents, a comic relief within a comedy, yet when Todd is placed in a serious situation, the dialogue is almost always uncharacteristically serious, and as a result it makes the character more hard-hitting on our emotions, and making the character more lovable. 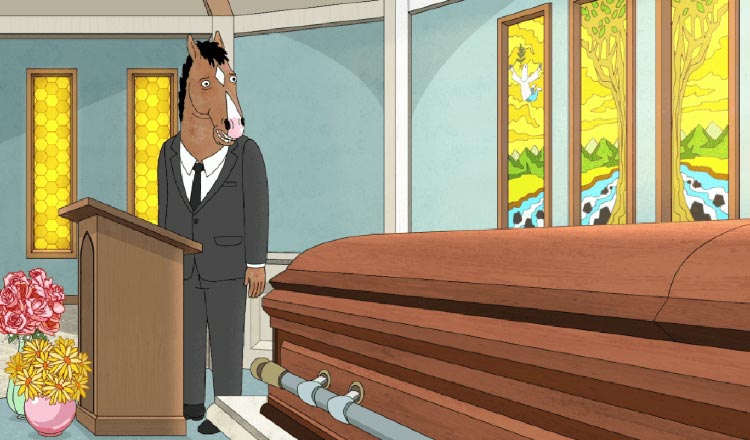 But other than emotionally wrenching, BoJack still remains genuinely funny. If one scene shows BoJack grappling with existential anxiety, the next scene can include scenes of a sex robot that blares inappropriate sexual phrases in the middle of a corporate meeting. The background of any given shot of a Bojack episode inevitably includes a joke in plain sight. Its allusions to pop-culture, real-life celebrities, and current social issues are comedic gems to anyone who gets it.

BoJack’s storytelling strategy is one that’s not afraid of going away from the series formula or timeline. It often switches time periods to better reflect where the characters are. Its series finales are often reflective on reminding us there is never going to be a happy ending – simply because in real life, our stories simply keep going. It is clear that BoJack Horseman serves as a shining example of how TV comedies can address dark themes and blatant reality. And it’ll come to no surprise if BoJack Horseman exceeds six seasons or more without losing its flair.