Increased trading in the Cambodia Securities Exchange (CSX) drove the index up 21 percent year-on-year for the first quarter ended March 31, 2019 (1Q19), closing at 580.21 points for a market capitalisation of $543.30 million.

The index hit an intra-quarter high of 671.65 points, compared to 480.98 points in the corresponding quarter last year, the exchange said in a statement on Friday.

Trading value from domestic trading rose to 29 percent in 1Q19 from 11 percent last year. However, trading by foreign investors dipped to 71 percent from 89 percent a year ago.

Retail investors represented 53 percent of the trading value while the remaining 47 percent was made up of institutional investors.

CSX said for the first time, Thailand became the first top foreign trader in 1Q19, whose trading value totalled $3.25 million. In 2018, Japan ranked the first. The top spot in the previous years was held by China and Taiwan.

The average daily trading volume in the quarter reached 67,311 shares per day, four times more than 16,229 shares per day a year ago. 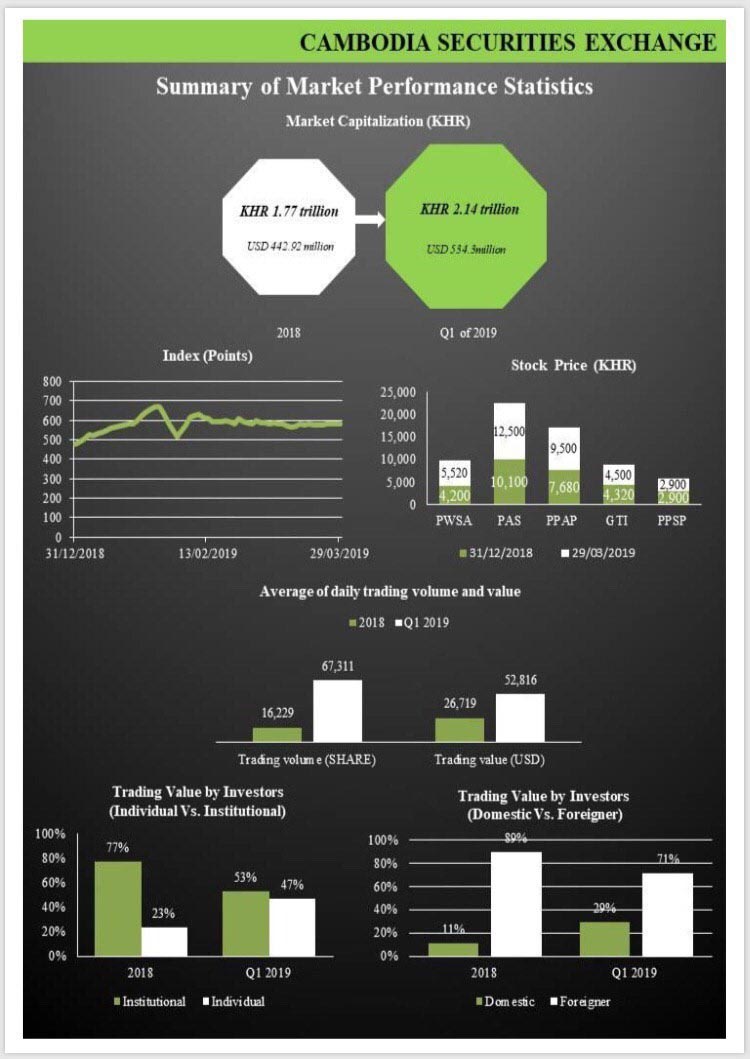 “We are doing many things to introduce our market to foreign investors. I went to Shenzhen Exchange to meet Chinese and Hong Kong investors, and Thailand and Malaysia to meet with institutional investors to create demand,” CSX chief operating officer Ha Jong Weon told Khmer Times.

Meanwhile, the stock price of five listed companies, three of which are state-owned, grew moderately in 1Q19.

Among the counters, Phnom Penh Water Supply Authority (PPWSA) gained the most at 31.43 percent in the quarter.