What it means for Cambodia to be an Asean member state

Two years after the Paris Peace Agreement, Cambodia paved its way to become a guest country in Asean from 1993 to 1995 and an observer from 1995 to 1996. In April 1999, Cambodia became a full-fledged member and on the 20th anniversary of Cambodia’s membership today, experts reflect on the Kingdom’s role in Asean and mull challenges going forward.

In his welcome statement to Cambodia in 1999, then-Asean secretary-general Rodolfo Severino said it was a “truly a historic moment” that after 32 years Asean had fulfilled the vision of the founding fathers to unite all nations of Southeast Asia under one roof.

“The realisation of ‘Asean-10’ has not only a symbolic significance, but also immense implications for the future of our region,” Mr Severino said. “With mutual respect and equality, we have turned our diversity to our advantage and pulled together to advance our common interest in strengthening peace and stability in our region.”

“The Kingdom of Cambodia’s membership will be a substantial contribution to this endeavour,” he added.

Prime Minister Hun Sen said in a statement yesterday that “Asean has became a core of Cambodia’s foreign policy which reflects the country’s political and socio-economic development, including regional reintegration and international cooperation.”

Paul Chambers, a lecturer at the Naresuan University’s College of Asean Community Studies, says it was a long process, especially since the violence held back Cambodia’s Asean membership.

“Becoming a member of Asean meant enhanced legitimacy and potential regional market benefits for Cambodia.” Mr Chambers says. “Cambodia, by supporting China with regard to Beijing’s problems with other Southeast Asian countries in the South China Sea, has proven to hold a divisive role within Asean.”

“Sadly, Cambodia became a member of Asean in 1999 when its coup days were thought to be over,” he adds. “But in 2019, the Cambodian military remains a powerful force in Cambodian politics and society.”

Since becoming a member state, Cambodia has hosted two Asean summits – the first in 2002 and the second in 2012. Both summits were held in Phnom Penh. Cambodia will again host the Asean summit in 2022, in Preah Sihanouk province.

In 2012, Cambodia and Asean failed to reach an agreement on how to deal with China’s claims on disputed territory in the South China Sea.

At the time, the Philippines and Vietnam wanted a joint statement to include references to their territorial disputes with China. The Philippines accused Cambodia of blocking any mention of the dispute.

Then Foreign Affairs Minister Hor Namhong said at the time that the meeting of the Asean Foreign Ministers is not a court.

“I requested that we issue the joint communique without mention of the South China Sea dispute […], but some member countries repeatedly insisted to put the issue of the Scarborough Shoal,” Mr Namhong said.

“Asean is now one of the main investors and trading partners of Cambodia,” Mr Vannarith says. “With a population of about 650 million and a fast-rising middle class, Asean is a huge market.” 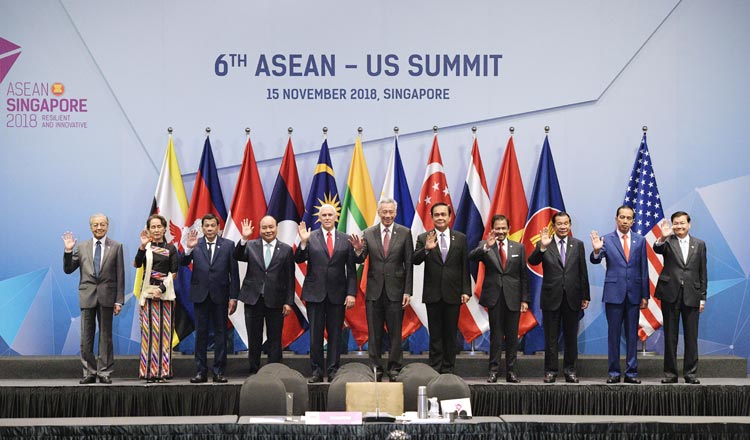 “And with the market potential of Asean, Cambodia could attract more foreign investments. Producing in Cambodia to export to Asean market,” he adds. “To grasp more opportunities from Asean, Cambodia needs to continuously and robustly reform its governance and invest much more in human capital.”

CPP lawmaker Suos Yara says Cambodia has enjoyed benefits from Asean. He says Asean represents an important element of Cambodia’s hedging foreign policy that the government has so far pursued.

“Simply put, it symbolises the government’s efforts to diversify its relations with other countries and regions, regardless of differences in cultures, societies, development levels and political regimes,” he says. “Only through such a diversification could Cambodia enjoy economic prosperity and maintain its sovereignty and independence.”

“As for the Cambodian People’s Party, Asean represents a crucial element of the party’s strategies in opening up to the outside world,” Mr Yara adds. “In other words, the CPP is not a standalone political party. It is an entity that has engaged, or has been willing to engage and cooperate with the world.”

He says Cambodia has recorded an average of seven percent of annual GDP growth, a success partly driven by Cambodia’s Asean membership.

He notes that membership has brought a considerable increase in Foreign Debt Investment from Asean countries.

“The FDI from Asean into Cambodia was insignificant in 2000, but the figure continuously jumped to $129.2 million in 2005, $523 million in 2012 and $603 million in 2017,” Mr Yara says. “Another telling achievement of Cambodia’s membership in this regional organisation is the expansion of the Kingdom’s market.”

He says Cambodia has been able to access the market of the plus three countries Japan, China and South Korea.

“The Kingdom also has a strong potential to access the markets of Australia, India and New Zealand once the Regional Comprehensive Economic Partnership, composed of ten Asean countries plus Japan, China, South Korea, India, Australia and New Zealand, comes into being in the near future,” he says.

“It is worth noting that RCEP countries account for roughly 30 percent of the world’s GDP and about one fourth of the global export,” he adds. “The Kingdom may not only benefit from the market access, but also the investment from the RCEP countries.”

When asked about the challenges Cambodia faced with regards to its membership, Mr Yara says it was mostly seen in the Kingdom’s trade deficit with Asean countries.

“This shortage can be complemented so long as Cambodia has become a competitive destination for the foreign direct investment,” he says, referring to how the government has made efforts to realise this goal by introducing a range of new policy reforms that ease bureaucratic red tape and encourage more investment.

Mr Yara says that the Kingdom’s foreign policy with Asean is on “the right track”.

“I firmly believe that Cambodia’s ASEAN policy is on the right track,” he says. “In addition, such a membership has enabled a small state like Cambodia to have a stronger voice when coming to negotiations with big economies like China, Japan, India and even the US.”

“Generally, large states often dictate the agenda of the small ones, if the latter group deals with them individually,” Mr Yara adds. “Nonetheless, Cambodia has been able to raise its voice through Asean multilateral frameworks.”

Norng Sakal, undersecretary of state at the Foreign Affairs Ministry and former permanent representative of Cambodia to Asean, says Cambodia has moved toward complete “peace, stability and improved her socio-economic development.”

“I am glad to note that Cambodia’s progress has been achieved with the wise leadership of Prime Minister Hun Sen who chose to join Asean,” Mr Sakal says. “It enables this country to build genuine partnerships with external parties and many other dialogue partners, providing impetus opportunity for Cambodia’s economic development, while maintaining durable peace and security.”

Protest over company’s failure to deliver on land purchases

More pigs killed due to ASF in Ratanakkiri