Home - HORRORS OF THE RWANDAN GENOCIDE

HORRORS OF THE RWANDAN GENOCIDE

Netflix/BBC series ‘Black Earth Rising’ presents a fictionalised account of the Rwandan Genocide that doesn’t chronicle what really happened. But the series presents how we remember, who gets to remember and who gets to claim justice of the tragic mass slaughter in the East African country.

The 1994 Rwandan Genocide (and the subsequent Congo Wars) is one of the great shames of the international community of the late 20th century. Over 800,000 members of the Tutsi minority were killed by the Hutu majority within 100 days, and the UN failed to intervene. The Rwandan Patriotic Front (RPF), a paramilitary group of former Tutsi refugees, and today’s ruling party in Rwanda, effectively ended the tragic chaos in July of 1994.

‘Black Earth Rising’ follows Kate Ashby (Michaela Coel), a Tutsi survivor of the Rwandan genocide who was raised in Great Britain by a famous human rights lawyer. The show immediately confronts the viewer with “neo-colonialist bullshit” as Kate’s adoptive mother, Eve Ashby (Harriett Walter) is speaking at a public event being shamed publicly for being part of the International Criminal Court (ICC) that claims to be for justice but selectively prosecutes cases by choice and all those chosen are from African countries.

In case you’re wondering how true this is, Hugo Blick, the show’s writer and director, did extensive research on prosecution rates of the ICC and found out that cases brought to trial were some odd 40 African cases. This is what inspired his idea for the series. And much of the series has viewers wondering if the ICC is an enacting self-righteous vehicle of western paternalism.

‘Black Earth Rising’ makes it pretty clear that cases get shifted around based on political expediency; and if a country like Rwanda, or even Cambodia, is deemed unable to have a fair justice system, the right to prosecute for justice is stripped and given to the ICC or any other highly esteemed western institution.

The human rights lawyer’s confrontation from the start foreshadows her relationship with justice and her personal life – most notably her daughter. Eve is quickly selected to prosecute Simon Nyamoya (Danny Sapani), an admired Rwandan war hero. However, he has now been charged with war crimes in the Democratic Republic of Congo (the DRC, formerly Zaire) by the International Criminal Court. 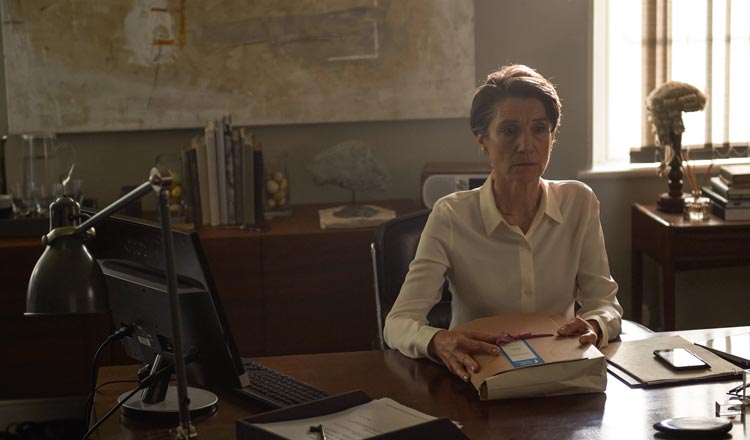 Kate Ashby is infuriated that her own mother would accept a case because he is the same warlord whose army put an end to the genocide that saw Kate’s family butchered.

At first, it seems as if the narrative is one about how a mother and daughter’s impossible life circumstances will be resolved, but that doesn’t even begin to scratch the surface. Underneath lies a deeper, darker mystery that Kate will risk her life to uncover.

Kate becomes the lead investigator working at a top law firm. She doesn’t know much about her origins, including her birth name. However, the harsh physical and mental scars haunt her as daily reminders of how she had survived 25 years ago. As such, the series not only holds viewer’s attention, it also shows how non-linear, multi-layered and messy memory – and by extension memorial culture – can be.

‘Black Earth Rising’ also reaffirms the horrors of the genocide in multiple episodes by stating how Hutu militias planned and orchestrated the massacres. Though it does not shy away from western involvement, for example, its bracing treatment of French — and no less, elements of the national Roman Catholic hierarchy’s  complicity in the genocide, stemming from their long-standing support for the pre-genocide Hutu dictatorship and continuing up until today is covered in the story.

In the second episode, we see Kate losing her center and becoming entwined with her lifelong family friend Michael Ennis (John Goodman). Kate never pretends to be a lovable character. She lets the world know her past, letting others know that she can never be normal and she is not to be trusted. But it gives her the edge to be a winning investigator.

We, as viewers, know that Michael has the key to much of Kate’s past, but he does not simply just give them to her. Instead, he has her begin work on an entirely different case where it seems he knows the outcome already. The discoveries in Kate’s investigation not only get her closer to her identity, but the truth that the ICC and western “leaders” have yet to be held accountable for their biases.

I think a majority of genocide survivors, regardless of ethnicity, should be able to recognise something of themselves and their individual and collective experience during the dark days of the genocide and for the generations after – which is one reason I picked this as my last Binge Worthy piece before I leave Khmer Times.

‘Black Earth Rising’ is woven together in a “post-memory” narrative. Post-memory is a term coined by a daughter of a holocaust survivor. It’s used to describe the relationship that the “generation after” bears to the personal, collective, and cultural trauma of those who came before them — to experiences they “remember” only by means of the stories, images, and behaviours among which they grew up. But these experiences were transmitted to them so deeply and affectively that it seems to constitute memories in their own right.

Watching ‘Black Earth Rising’, I think, can be a healing experience for Cambodians who have quite a lot in common with the Rwandan genocide. If you’re looking for a multi-layered political drama and are ready for a heated internal debate about justice while crying, this might be the show for you.

This is my farewell write-up for this page. I hope you’d take the time to binge-watch my final pick.

After Khmer New Year clean up