Siem Reap Provincial Court yesterday charged a farmer who allegedly hacked two of his sisters to death with a cleaver over a land dispute in Sotr Nikum district.

The murders took place at about 5.30pm on Saturday in Popel commune’s Damrey Kon village.

The two victims were identified as Vou Khoem, 49, and Vou Khuth, 42, both farmers living near Mr Vorn.

Col Sokha said that the accused was charged with intentional murder and faces up to 15 years in jail if convicted. He was arrested on Saturday and is now in prison pending trial.

Captain Keo Saroeun, a district penal police officer, yesterday said that according to police investigations and neighbours’ accounts, Mr Vorn at about 5pm on Saturday started digging up a portion of Ms Khoem’s land to build a bathroom for his family.

He said Ms Khoem came out of her house to stop him but he ignored her claiming that he owned that portion of land. 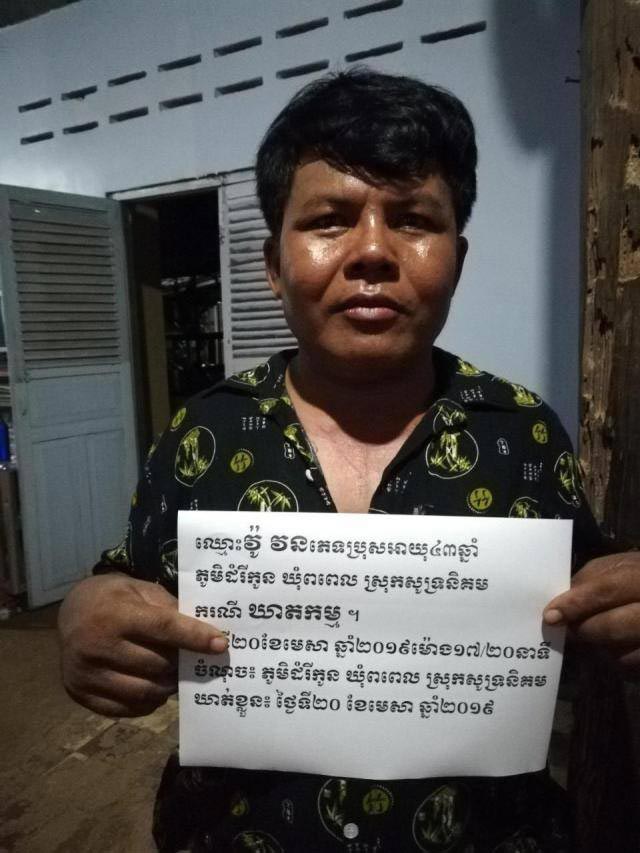 Cap Saroeun said the accused claimed that their mother had given the land to him before she died in 2013 and accused his sister of grabbing it.

He said both got into an argument during which Ms Khoem cursed Mr Vorn.

“He was angry with Ms Khoem for stopping him from digging the land and insulting him,” Cap Saroeun said. “He took a cleaver and hacked her several times before she died from serious injuries on her right jaw and neck.”

He noted that Ms Khuth saw her brother hacking their sister and shouted for help.

Cap Saroeun said Mr Vorn then ran towards Ms Khuth to attack her but she fled into a rice field.

He said Mr Vorn then chased after his sister and hacked her.

“Ms Khuth was hacked several times on her left jaw, right ear and throat and she died about 50 metres from her house,” Cap Saroeun noted.

He said that after killing the two victims, Mr Vorn fled the scene, but was arrested by police at about 6.30pm that day. After his arrest, police seized a cleaver from him.

Man held over killing of father