Home - Swimming with the SHARKS!

Swimming with the SHARKS!

I know it’s that time of the year when we all go back to our homeland or travel somewhere with our families and have a little too much to drink. And in our drunken haze, we make grandiose business plans with our favourite cousin.

So for Khmer New Year’s Binge Worthy piece, I feel like giving you a different pick, something that would not only entertain you but give you some things to think about in your drunk chats towards your new multi million-dollar empire.

‘Shark Tank’ is produced by Mark Burnett and is based on the format ‘Dragons’ Den’, which originated in 2001 with the Japanese show ‘Tigers of Money’. The sharks are paid for their participation in the show, but the money they invest is their own. The entrepreneur can make a deal on the show if a panel member is interested.

‘Shark Tank’ now has 10 Seasons, and Netflix is streaming the first three seasons, so far. Personally I think Season 2 is better than Season 1, majorly because of an additional character that’s giving a “go big or go home” vibe. 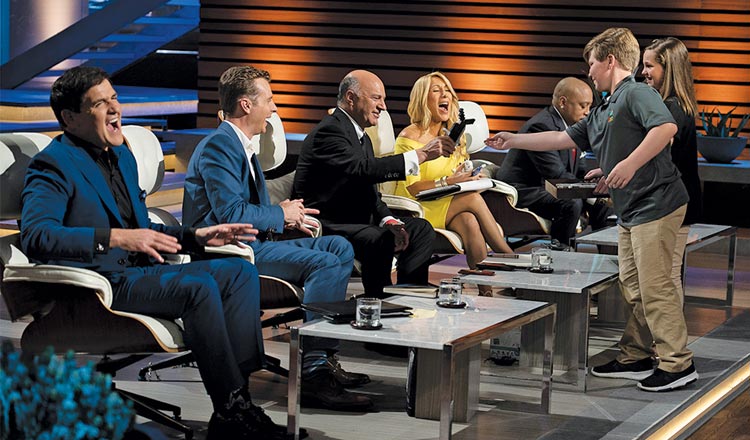 So, this is how the show works: participants have the opportunity to seek funding for inspiring, innovative, and game-changing ideas as part of Shark Tank. The twist on this popular show is the short time given to each pitch with the judges actually investing their own money.

The ‘Shark Tank’ premise is designed to push the viewers’ collective thinking, encourage funders and organisations to take risks, and explore new, big ideas in education policy. But be warned, even the start of every pitch makes you feel like you’re being lowered into a shark tank.

Presenters as potential shark bit get grilled by the judges. In return they may request for up to $150,000 for a feasibility study or to pilot their idea. There is also another catch – how much of your business would you give away?

The bigger the asking price, the more the investor will ask for and the harsher the questions become. So the presenter may only ask for $50,000 but in return have to give away 35 percent of their company.

Since the show is a decade old already, it’s actually more fun to see the starts-ups they have rejected now becoming huge companies. Uber was rejected in the show and did not even make it into airtime. But, look at Uber now. This fact can put the show into a perspective.

Good afternoon, Sharks! My name is Travis Kalanick and my new app is going to change the way people get around their cities in over 180 countries around the world. Uber is going to replace half of the taxis and limousine companies in existence overnight.

That’s right. It’s an app on your phone and it lets you order a car service from anywhere you are at any time.

Kevin O’Leary: How will you get all the cars and drivers to work for you?

That’s the beauty of it. They won’t work for us. They’ll work for themselves and split the revenues. We’re even going to let random drivers who aren’t professionals operate on our platform!

Barbara Corcoran: Let me see if I understand this. Taxi and limo drivers are going to agree to work for you but not really be considered as working for you? And you think people are going to want to get picked up by unlicensed strangers?

Daymond John: So what you’re saying is you invented a hitchhiking app?

Well, that’s not how I would put it exactly.

Barbara Corcoran: So you’ll be competing with every transportation company in the world?

Yes. And we’ll also be having knock-down, drag-out fights with politicians and lobbying groups in almost every state and city, not to mention the fact that we’ll be responsible for the safety of millions of drivers and passengers everywhere we go.

Kevin O’Leary: What did you say your valuation would be?

We think we’ll be worth $40 billion within our first 36 months.

But on the bright side, even if you fail, the show is often responsible for what has become known as the Shark Tank effect. Simply appearing on the show, even without getting an offer has the potential to significantly boost sales for companies. And just because you get rejected does not mean the end for you and your ideas.

At the start of each pitch, there is 30 seconds of silence when both contestants and judges must look each other in the eyes. I have deemed this part of the pitch as the death stare. The dramatic silence before the pitch begins, sets the viewer to become engaged without knowing it.

One of the goals of the show is to fuel and reward the entrepreneurial spirit in a fun and safe setting by suspending the typical grantor/grantee dynamics.

The best thing about ‘Shark Tank’ is the energy and enthusiasm that contestants bring to the show. Most of the one-time entrepreneurs that I’ve seen on the show seem to truly believe in their products and enjoy the opportunity to showcase them.

Because participants are only given a few minutes to pitch, they have to get right into it. It’s this formula of seeing these teams putting their whole life on the line to get a nod from the judges that you realise the power of words. And their creativity that goes into their pitch keeps you on the edge of your seat.

When you first see the show, you sort of have this cheerleading mentality for all the contestants. But then the deeper you go into the show, you start to get picky real fast and no longer want every presenter to win. Instead, you revel in the shark’s asking the hard hitting questions.

In case you watch the show and wonder if you have the chance to be a presenter or wonder about the rules and guidelines, I did a quick google search and this is what is needed:

You will have no more than three minutes to deliver your pitch. Include in your pitch your name, your location, and your background. Share your business mission and products and services.

Who is your target market or customer? State your current progress towards your plans.

What do you need to get there?

Keep it succinct and simple! Show your passion for your business plans!

Be clear about what you will accomplish with your business. Remember that your pitch is meant to inform, engage and market.

Demonstrate your belief in your success by using confident language like, “I will” and “We can.”

Sadly, however, you must be a US citizen or resident to join ‘Shark Tank’.

But in a country of so many small sellers, I’m calling on Cambodian media to establish a Khmer version of this opportunity because it would definitely be a hit, possibly bigger than Cambodia’s Got Talent.

But what happens after you make a deal on Shark Tank? Is Shark Tank behind the scenes anything like what we see when the show airs? Is Shark Tank really real? The answers might surprise you. That’s for you to find out as you watch and then enviably Google the pitches you love best.

Biological clocks – men have them, too!