A group of international business associations representing garment, footwear and travel goods buyers have called on the government to improve labour and human rights conditions in the Kingdom in the face of possible preferential trade agreement changes by the United States and European Union.

In February, the EU launched a six-month period of intensive monitoring and engagement that could lead to the suspension of the Everything-but-arms trade scheme, while US lawmakers have also made a similar move to review the Kingdom’s Generalised System of Preference status.

These initiatives were made by the EU and the US over perceived human rights and democratic setbacks over the dissolution of the former opposition CNRP in 2017.

Last year, the group comprised of international buyers urged the government to make improvements in order to avoid the suspensions.

In a joint letter addressed to Prime Minister Hun Sen and four ministries on Friday, eight associations, including the American Apparel and Footwear Association and Fair Labour Association, called for a timeline from the government on improvements.

“As we discussed with your ministries in October, we stand ready to work with your government to address these issues to ensure that international brands and retailers increasingly look to Cambodia as a major sourcing destination,” the group said. “We remain deeply concerned with the lack of progress that has been made in addressing these important issues.”

It noted that charges against many labour leaders remain and the Trade Union Law continues to restrict union activities.

The group also noted in the letter that the role and independence of the Arbitration Council have continued to be undercut despite being an effective dispute resolution mechanism.

“Each of these developments undermines progress towards improving workers’ rights and stabilising the garment, footwear and travel goods manufacturing sector,” it said. “These issues are emblematic of some of the larger human rights issues in Cambodia.”

“The very real threat of withdrawal from EU EBA benefits and US GSP benefits will severely damage the Cambodian industry, and the millions of Cambodians who work in the industry,” it added. “Further, it will undermine the decades of effort your government has put into developing a successful industry, which has brought about enormous benefits both to the Cambodian economy and the Cambodian people.” 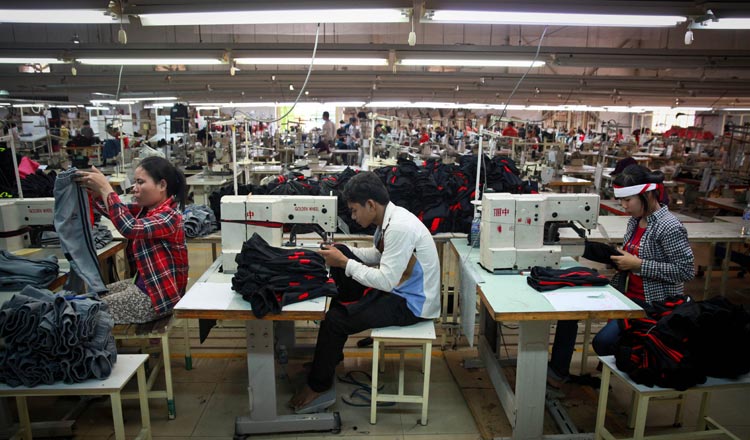 Government spokesman Phay Siphan yesterday said the government has been making changes to the sector by increasing the minimum wage for garment workers, and improving working conditions. Mr Siphan also noted that pregnant garment workers are given aid for delivering babies.

Mr Siphan then slammed the group’s concern as “politically motivated”.

“The concerns are their personal things,” he said. “We have maintained peace, political stability and happiness for our workers.”

“We are very much paying attention to the sector,” Mr Siphan added. “I think their concerns were politically motivated in order to put more pressure on Cambodia.”

Mr Siphan said that the group was interfering in the country’s judicial system by weighing in on court issues.

“We cannot exchange our independence and sovereignty for some investments,” he said. “We cannot kneel in front of them.”

“All concerns mentioned in the letter do not represent the facts and reality about the freedom of association, as well as the well-functioning Cambodia Labour Arbitration Council,” Mr Sour said. “We, once again, will provide the statistics and facts to our friends, and we hope they will read it this time.”

According to the group, efforts made by the government to create a strong and competitive sector have improved the livelihoods of Cambodian workers.

It added that Cambodia has established itself as a strategic partner to many garment, footwear and travel goods companies.

It also said that last year, Cambodia was ranked the sixth largest garment supplier to the US market and fifth to the EU market.

“International brands and retailers want to see this important sector grow even more in Cambodia,” it said. “Indeed, a successful and stable Cambodian garment, footwear and travel goods sector is both good for Cambodia and for international buyers.”

Last year, Cambodian exports to the EU and the US reached $8.5 billion, or more than one-third of its Gross Domestic Product.

According to a report by the Asian Development Bank last week, the economy is projected to grow at seven percent this year and will slow down slightly in 2020 following a deceleration of economic growth in the country’s top trade partners.

Lu Lay Sreng returns to Kingdom after 18 months in exile

King and Queen Mother return to Kingdom after medical trip