The Education Ministry has disciplined a teacher at a primary school in Phnom Penh’s Meanchey district after a Facebook video of her collecting money from students to supplement her income went viral.

A ministry press release on Friday said it began an investigation after viewing the video showing the woman collecting money from students in her class in Phoum Russey Primary School in Stung Meanchey II commune.

“The investigation showed that the teacher collected money and she also admitted in writing that she did so,” the release said.

It added that to protect the school’s reputation and promote teacher professionalism, the ministry transferred the woman to do office work in the school and appointed another teacher to teach her class.

“The ministry also instructed the district education department to tell the school principal to hold a meeting with all the teachers and remind them not to act unprofessionally, such as by collecting money from students, or they risk being fined,” it noted.

After the video went viral, Facebook users criticised the teacher’s actions, saying she was showing a bad example to her young students by being corrupt.

Sin Samvatha, a parent living in Phnom Penh, said that teachers should not collect money in class because it will affect the students’ morale. 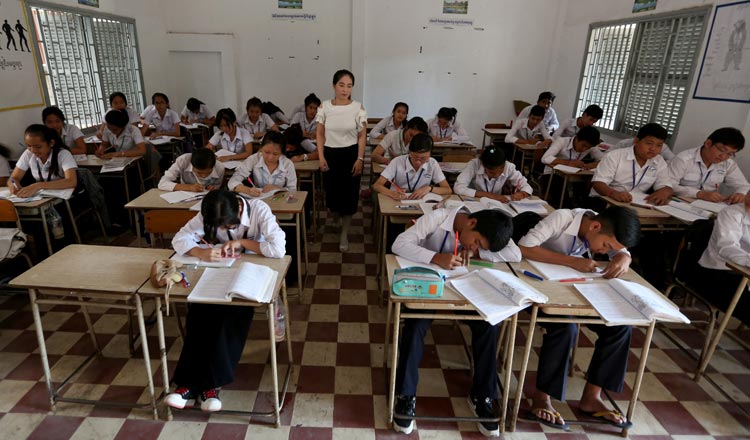 She added that these were children whose parents sometimes gave a small amount of pocket money for them to spend in school.

“Although some teachers still collect money from their students, other teachers are good,” Ms Samvatha said. “I appeal to the ministry to eliminate this activity.”

Ouk Chhayavy, Cambodian Independent Teachers’ Association president, yesterday said that following crackdowns by the Education Ministry, many teachers have stopped collecting money from their students, but a small number still do so.

“Some teachers collect 500 riel to 1,000 riel from a student because a teacher’s salary is still too low to meet monthly needs,” she said. “We appeal to the ministry to totally eliminate this unprofessional action.”

Ms Chhayavy noted that some teachers do not take money from their class students daily, but instead collect monthly payments from the parents.

During an interview in December, Education Minister Hang Chuon Naron said the ministry will spend 80 percent of its budget this year to pay the salaries of teachers and others employed in the education sector.