The Ministry of Agriculture, Forestry and Fisheries yesterday said hundreds of African Swine Fever-infected pigs in Ratanakkiri province were discovered in O’Yada district.

Tan Phannara, director of the ministry’s animal health and production department, said the infection was detected in about 500 pigs being raised by local villagers.

He said that due to the spread of the disease, a ministry team is monitoring the Cambodia-Vietnam border area to investigate how the pigs made it into the Kingdom. 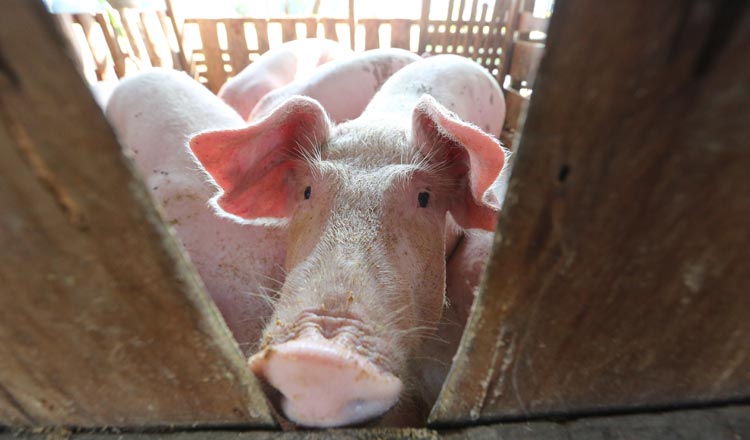 Mr Phannara noted that preliminary results of the monitoring process showed that the infection could have come from pork products being sold on motorbikes along the border.

“We have studied and found there is no import of animals from Vietnam, but people at the border said meat and vegetables are still being imported and sold on motorbikes,” he said.

“When this case was detected, our officials immediately took action to prevent the transport of animals, and sprayed antiseptics in areas where the infection happened,” Mr Sona said. “If we detect the virus in an animal, then we will cull it immediately.”

Despite the presence of ASF in Ratanakkiri, the Agriculture Ministry said the disease does not transmit to humans. However, the ministry said it is worried about economical repercussions.

Last month, the Agriculture Ministry issued a directive to check and prevent the spread of ASF in the Kingdom.

It said that the disease is difficult to eliminate, and that the virus could survive after animals are processed into meat products. It noted that there has yet to be a vaccine for the disease.

Additionally, the Agriculture Ministry said it has taken strict measures to prevent the import of pigs or pork products from Vietnam.

Ly Sovann, director of the Ministry of Health’s Communicable Disease Control Department, said ASF originated from Africa, but managed to spread to China and northern parts of Vietnam, which borders Ratanakkiri.

During an ASF prevention workshop last month, Agriculture Minister Veng Sakhon told ministry and sub-national officials to work together in provinces bordering Vietnam to prevent the spread of the disease.