Interior Ministry anti-drug police on Tuesday seized nearly 200 kilograms of crystal meth and cocaine and nearly 500 kilograms of hydromorphinol from a house being rented by a Taiwanese national in Sen Sok district.

He said the seizures were made at about 2pm on Tuesday during a raid led by deputy prosecutor Seng Kimlaing.

Gen Chito said that at about 10am on Tuesday, Uy Rasy, the house owner, alerted police that there was a strong smell coming out of the house which he had rented out to a Taiwanese national.

“According to the house owner, he had rented the house to a Taiwanese man last year,” he said. “But over the past three months, the owner had noticed that the Taiwanese was not staying in the house.”

“The owner visited his house on Tuesday, smelled a strange fragrance and reported the matter to district police,” Gen Chito added. 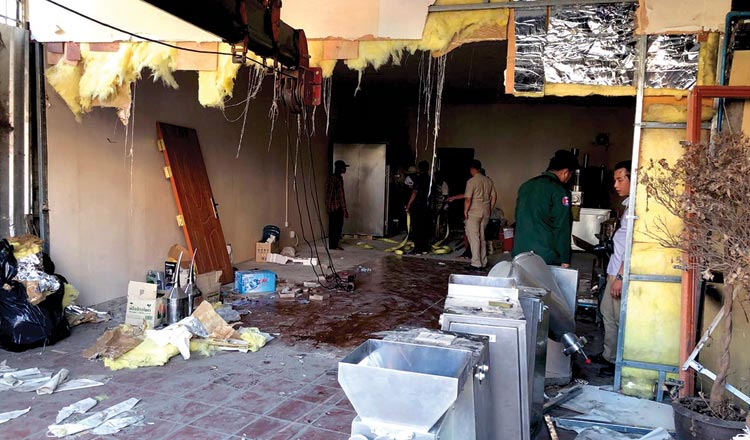 He said that after receiving the report from the district police, the ministry’s anti-drug department police sought permission from the municipal court prosecutor to inspect the house.

Gen Chito added that police know the identity of the Taiwanese tenant through a photocopy of his passport which he gave the owner, adding that they are looking for the suspect.

He noted that Nurul Fadli Putro, 43, a tourist, had been sent to the Interior Ministry for further investigation.

Mr Putro was arrested at about 12.30pm at the Cambodia-Laos border checkpoint in Samaky commune while entering the Kingdom carrying a large suitcase.

Colonel Nimol said that after inspecting his suitcase, police found and seized 44 packages of crystal meth weighing 25 kilograms and hidden in cakes and coffee packages.

He added that the suspect was accused by police with drug trafficking and faces a life sentence in jail if convicted. He will be sent to the Phnom Penh Municipal Court today.