Home - Mines casualties on the rise this year

Mines casualties on the rise this year

The Cambodian Mine Action Centre has cleared 25 kilometres of landmines and destroyed more than 9,400 unexploded ordnance in the past three months, during which time 44 people were killed or injured in explosions.

CMAC director-general Heng Ratana yesterday said that CMAC met 90 percent of its demining target for the first three months of the year.

He said CMAC also educated more than 80,000 people on the dangers of landmines and cooperated with local authorities to solve 1,000 requests for mine clearance from the villagers.

“I regret that 44 people have either been killed or injured by landmines in the past three months,” Mr Ratana said. “I thank the government, donors, local authorities and all partners for their warm support to CMAC to successfully fulfil its humanitarian efforts.”

Cambodian Mine Action and Victims Assistance Authority vice president Ly Thuch yesterday said that the mine action sector joins Prime Minister Hun Sen, who is CMAA president, in expressing sadness over an exceptional increase in casualties over the past three months.

He noted that seven people were killed and 37 other people were injured, eight of whom were disabled, during the last three months, an increase of more than 100 percent compared with the same period last year when there were 17 landmine victims. 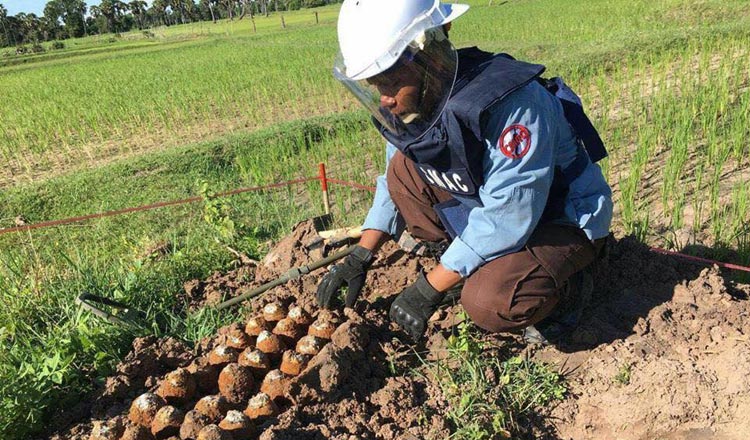 “As the mine action sector authority, CMAA is working round the clock with relevant ministries, agencies, the armed forces, mine action partners and sub-national authorities to work harder on mine risk education in the most affected communities around the country,” Mr Thuch said. “I have been coordinating joint efforts to reduce casualties and injuries.”

He added that CMAA will also work with members of parliament and senators of the most affected provinces and the government’s task force in charge of provinces to increase cooperation on addressing threats and risks from explosive remnants of war.

On March 15, CMAA issued a statement saying that residents must report any findings of mines to the authorities. It also said that local officials must inform residents about areas laden with mines.

“In order to reduce mine and UXO accidents, you must immediately report to police, local authorities or the closest demining unit about what you have found,” it said. “Do not make something from unexploded devices, and do not ask the authorities to allow for the cultivation of mine-filled lands.”

In February, CMAC issued a report saying that about 45,500 unexploded ordnance and landmines were unearthed from nearly 90 square kilometres in the Kingdom and ultimately destroyed last year.