Mr Hun Sen announced Friday that Royal Railway’s contract will be terminated after below-par performance from the company, but yesterday the premier said his words had been misunderstood and issued a clarification.

“I previously said that Royal Railway will no longer manage the railroads and that the Ministry of Public Works and Transport will start negotiating with Oknha Kith Meng,” he said, referring to the chairman of Royal Group, the parent company of Royal Railway.

“I didn’t mention a specific date as to when the contract will end, however,” the premier said.

“People misunderstood me last time because my comments were unclear. That’s why I instructed the minister of public works to clarify the situation.

“The truth is that the government is unable to assume control of the train system at the moment. Goods are being loaded and unloaded from the trains as we speak and hundreds of employees are working – how could we possibly take over the management at once?

“If we rush to assume control, we could face a crisis,” he said.

“There is no new company to replace Royal Railway. This means Royal Railway will continue to operate as usual,” he said.

Mr Hun Sen said the real problem was that Royal Railway no longer had an international partner, after Australia-owned Toll Hold sold its stake in the venture.

He said the government will find Royal Railway a new partner that can help it improve the railway system.

“Now, we have to find a new company that can partner up with Royal Railway and who is able to invest capital into the railroad system to improve both lines,” he said.

The Ministry of Public Works and Transport on Sunday issued a letter informing the public and Royal Railway employees that the company will continue operations as usual on the southern line and that the ministry needed more time to study the legal framework and other technical issues before assuming control of the railroad system. 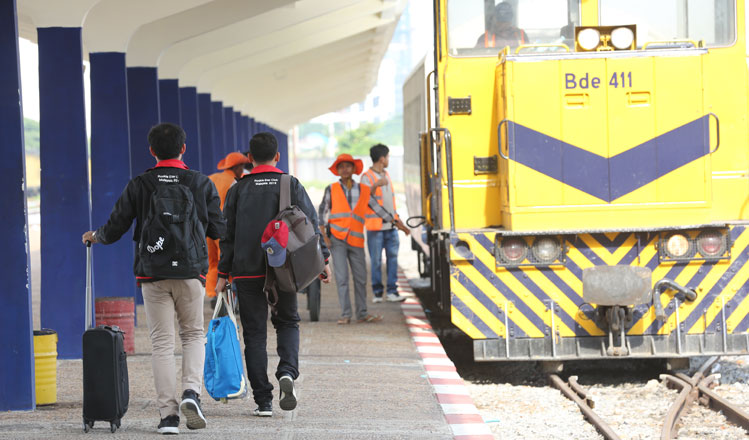 “The ministry allows Royal Railway Cambodia to continue to manage the southern line.

“Meanwhile, the ministry will start the process of finding an experienced and qualified company that can modernise the northern and the southern lines to meet the needs of exporters, importers, businesses, farmers and passengers, and comply with international standards,” the ministry said, adding that Royal Group may chose to participate in the modernisation of both the northern and southern lines.

Also on Sunday, Royal Railway Cambodia issued a statement thanking the government for allowing it to continue to manage the railroads.

“Royal Railway Cambodia is committed to improving railway transport by complying with international standards of safety and efficiency, making train transportation affordable and contributing to national economic growth,” it said.

In 2009, the government signed on a 30-year concession agreement, allowing Toll Cambodia – a joint-venture between Australia-owned Toll Holding Limited and local conglomerate Royal Group – to manage the operation of the railway system in Cambodia.

In 2014, Toll Holding transferred all its shares to its local partner, making Royal Group the only shareholder. The company was re-named Royal Railway Cambodia.

More than $226.5 million have been spent to restore the southern line – connecting Phnom Penh and Sihanoukville – and the northern line – from Phnom Penh to Poipet. About $85 million came out of the national budget while the rest was lent by the Asian Development Bank and other development partners.

Why some are passing on Uber and Lyft