The Kingdom’s dollarised economy thus far has not hindered overall economic growth and the development of the financial sector, as proven in the findings of surveys by the National Bank of Cambodia (NBC) and the Japan International Cooperation Agency (JICA).

It has, in fact, stabilised the economy and brought in many major investments into the country.

However, with the US dollar dominating daily transactions, this leaves the local currency in an odd place, constantly coming in second in its own financial ecosystem. The NBC-JICA surveys, for instance, found that foreign currency is still preferred particularly for large transactions.

Despite this, NBC Deputy Governor Neav Chanthana reiterated that the central bank would continue to promote a widespread use of a sole currency in the economy for the sake of sovereignty and national identity.

Now, following the call by the NBC, key players in the Cambodian economy are pulling their weights in enhancing the role of the local currency in the best ways they know how. They also spoke about the challenges they face in making the shift from US dollars to Riel.

Sabay Digital Group CEO and Founder Sila Chy Thmor is one of the many frontliners charging towards the Riel ‘revolution’.

“We try to start a revolution. Five years ago, we started paying our staff’s salaries in Riel, instead of US dollars. Initially there was hesitance (from the staff) because a bulk of their transactions and spending are done in US dollars.

“But now I observe that they are more accepting, I guess because they take pride in getting paid in the local currency. I consider this a successful change,” he said at the celebration of the 39th Anniversary of the Re-introduction of the Riel on Monday.

Sila, who also sits on the board of Sabay MVP Film and Major Platinum Cineplex, acknowledged that the move was no walk in the park, adding that it was initially difficult to identify banking partners that could cater to the Riel-only salary disbursements.

“To make the move, we needed to find ATMs that could supply Riels. Finding a banking partner was tough in the beginning especially since Riels are insufficient in supply. After discussions, our banking partners understood and they obliged. It’s all about the mindset,” he said.

Regardless, the group, which owns Cambodia’s first and largest homegrown chain of quick service restaurants and operates international franchises for Domino’s Pizza, Lotteria, Tous le Jours and Asian Kitchen, believes this would spur other companies to follow in its footsteps.

“In 2018, we processed close to about 37 million transactions in Riel. That means people were either using Riel to transfer or receive money, or they use Riel to pay utilities, or for their loan repayments. We are proud of these statistics.

“This also proved that Wing is unique and holds a vital position to drive the use of Riel,” he revealed during the panel discussion on Monday.

The discussion was led by NBC Director-General and Assistant Governor Chea Serey and saw participations of multiple stakeholders who are the backbones of Cambodia’s economy.

“We already know that if we use more of Riel it means that we are confident in it. It is also able to drive the growth of our own economy,” Garment Manufacturers Association In Cambodia (GMAC) Deputy Secretary General Kaing Monika said.

“I appeal to everyone, as well as enterprises and firms, to improve their usage of Riel. There is a dire need to increase the public’s awareness on Riel’s importance and how we should take pride in the ability to use local currency.” 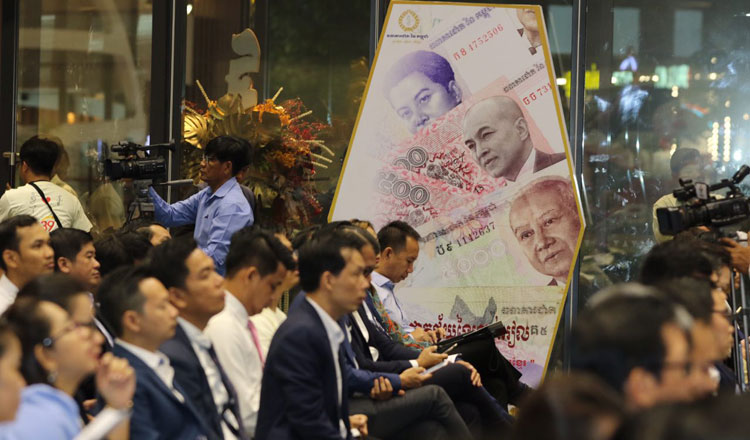 During the discussion, GMAC had also agreed to play its part by distributing booklets on the importance of Riel to its factory workers.

“We are happy to collaborate with NBC. We have created libraries at the factories to ensure our staff are financially literate. The booklet would be an addition to our existing programmes such as financial management trainings,” he added.

Weighing in on the topic, Cambodian Microfinance Association (CMA) Chairman Mr. Kea Borann said, however, the total shift from US dollars to Riel is still unfeasible due to multiple reasons, including the preference of the overall retail payments and the discrepancy in US dollar-Riel conversion in some shops.

“For MFI, the majority of our employees’ salaries are paid in cash. It is tricky to pay them in Riel because the retail payment system, especially in urban areas, involves mainly US dollars which puts Riel users at a disadvantage.

“Another issue is the exchange rate set by the shops. Some shops equate 1 US dollar to 4,100 Riel, instead of the blanket 4,000 Riel. This encourages people to pay in USD instead. Some shopkeepers would also directly quote prices in US dollars, so customers would oblige and pay in dollars,” he said.

Cook up a healthy storm