The Japanese government yesterday provided $262,750 for the rehabilitation of irrigation systems in two provinces and improving facilities at a polytechnic institute.

The grant contracts were signed by Japan’s Ambassador to the Kingdom Hidehisa Horinouchi and representatives of the three recipients at the embassy.

Japan is providing $89,112 to rehabilitate a 1,050m-long dam in Oddar Meanchey province and a spillway and two water gates will be constructed in Samraong city’s Koun Kriel commune.

It is also providing $88,935 to rehabilitate the Boeng Khtum Irrigation system in Battambang province’s Ou’Taki commune in Thma Koul district.

Mr Horinouchi said at yesterday’s signing ceremony that the first project in Oddar Meanchey province will benefit about 1,300 people who will have a stable supply of water to irrigate their land.

He noted that a rehabilitated dyke will also be used as an access road after the project is completed.

Mr Horinouchi said that due to a lack of irrigation water, farmers now rely on unstable rain water supply to irrigate the fields. 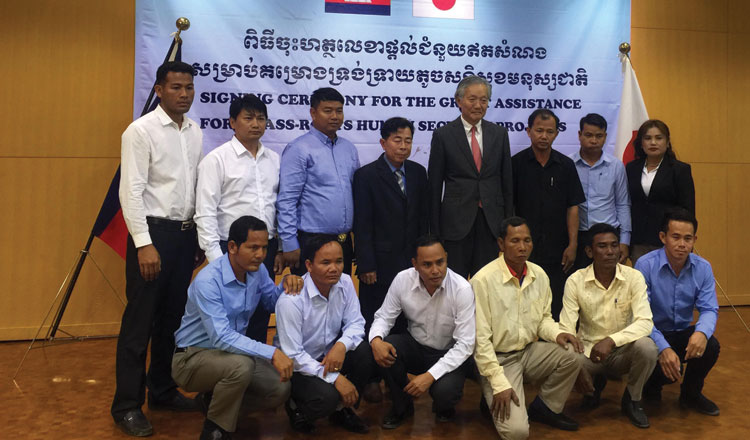 He said the second project is expected to benefit nearly 230 people in Battambang province and contribute to providing more irrigation water to rice fields and increasing agricultural products.

Mr Horinouchi said that the expansion of classrooms and installing of technical equipment at the polytechnic will benefit 300 student and teachers.

“Japan hopes that these three projects will provide benefits to the residents through the rehabilitation of irrigation systems,” he said.

Nhen Kourn, Oddar Meanchey provincial water resources and meteorology department director, yesterday said that the department will use the funds to repair the dam and build water

“This donation will help a lot to rehabilitate the irrigation system to ensure there is enough water for rice and other crops,” he said.

Long Phalkun, Battambang provincial department of water resources and meteorology department director, said that the funds will be used to repair the Boeng Khtum Irrigation system.

“We will try our best to run this project successfully to help people living there to get enough water to use and raise their crops,” he said.