Home - Dreaming of the Crown

Dreaming of the Crown

Miss Universe Cambodia is a ladder that the beautiful and courageous Cambodian women who dream of becoming beauty titlists have to climb before they can represent the Kingdom of Wonder in the Miss Universe competition and other international pageants. This year, 25 candidates from across the country are all set for a once in a lifetime journey of beauty, glamour and brains. Taing Rinith writes.

Att Nika is a 23-year-old contestant in Miss Universe Cambodia 2019 from Takeo province. Standing at least at about 5′4″, Ms Nika was born in a farming family and has dreamed of becoming a beauty titlist since she was a little girl, just like Rern Nat, who won Miss Cambodia 2017 and last year represented Cambodia in the Miss Universe 2018 pageant held in Bangkok, Thailand.

“This is my lifelong dream,” Ms Nika says, smiling with sparkling eyes. “I want to become a Cambodian woman who will bring home the crown of Miss Universe and show the beauty, both inside and outside, of Cambodian women.”

A new graduate from the Royal University of Agriculture, Ms Nika has felt a strong connection with Mother Nature. She says if she wins Miss Universe 2019, she will use her honourable title to contribute to the protection of the natural environment.

Meanwhile, Thorn Mala, from Kandal, says if she becomes this year’s Miss Universe, she will do her best to contribute to women empowerment, especially through education.

“Women are considered weaker, but I want to promote their power and (fulfil) their wishes,” said the 19-year-old contestant. “I believe women are strong, and I want them to be independent without relying on men.”

“Women can be anything they want to be, and I am sure they can even lead the country,” she adds.

However, to be the third Cambodian woman to walk gracefully on the grandest stage is no easy task. First of all, Ms Mala and Ms Nika will have to prevail over one another, as well as the other 23 candidates, who share the same dream although they may have different missions.

“The training is so tough,” said Tham Malina, candidate number 7 of Phnom Penh. “We have to learn to catwalk, as well as to perform both Khmer traditional and international dances. But, I am not giving up, and I will always do my best.”

Most of Miss Universe Cambodia contestants are students in their teens or in their early 20s. Among those is Roeun Youry, a third-year university student majoring in English. Representing the province of Banteay Meanchey, Ms Youry says her family allowed her to participate in Miss Universe Cambodia only because she has promised them that the competition will not interfere with her education.

“In fact, my participation does the complete opposite,” she said. “I am studying even harder because knowledge is also very important in this competition; not just physical appearance.” 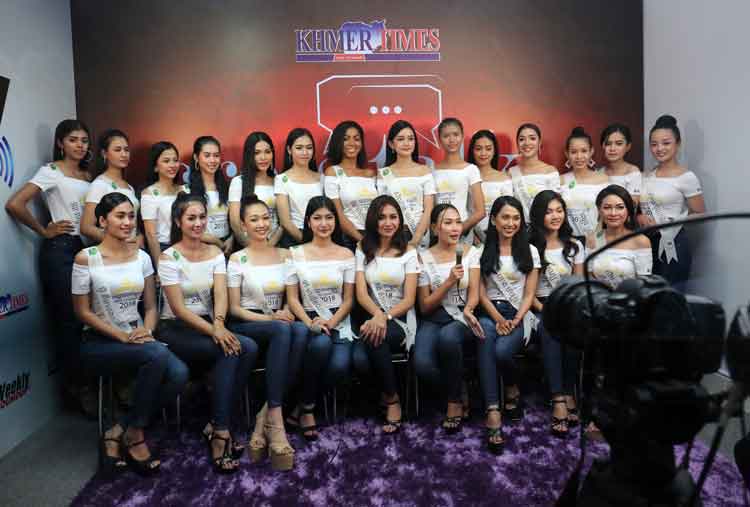 “I speak English but the other contestants also speak English. We will not have any problem competing in the international competition.”

Another candidate vying for the crown and title is Nin Malyneth, who stands out as both an alumni of Cambodia’s Next Top Model (Season1), in which she was in the top five, and the first African-Cambodian to participate in the competition.

“Being 25 may already be considered old age in the field of modelling,” Ms Malyneth told Khmer Times. “But, nothing beats experience, and I want to prove that this woman can be trusted with representing her country on the international stage.”

“If I win, I want to dedicate this honour to my Cambodian mother, who has been working so hard to support the family after my father passed away nearly 10 years ago.”

When asked which candidate she think will be crowned Miss Universe Cambodia on March 31, Kha Annchhany, one of the contestants’ coaches, says it was as if she was asked to pick a favourite child.

“This year’s contestants are not only beautiful but also knowledgeable,” said the 4th runner up in Miss Cambodia 2017 pageant and a contestant in Miss Asia Pacific International 2018.

“That there will be five winners and only one going to Miss Universe hurt me. Yet, as a former contestant, I have to be ready for this because it is inevitable.”

As the coronation night draws near, the 25 official candidates are now busy in their trainings, rehearsals and social activities around Cambodia. All the candidates will be going through different activities designed to make them significant contributors of the promotion not just of Cambodian women but of the entire cultural heritage of the Kingdom.

And on March 17, the candidates will be taking the competition higher as they show their elegance and confidence in the Long Gown Competition at the Courtyard by Marriott Siem Reap Resort.

The Grand Coronation Night will be on March 31, 8:00 pm in NABA Theatre, Naga 2 with a live TV broadcast on CTN.

Shanghai Cabaret: Theater for a cause