More than 600 tuk-tuk and rickshaw drivers using ride-hailing apps flocked to the capital over the past two weeks to attend free training courses on traffic rules provided by City Hall.

Last month, City Hall announced that the training is to educate the drivers to be more careful on the road following criticism by social media users.

Training is to be conducted every Saturday from 8am to 5pm until May 4 at the department’s driver’s license unit in Russey Keo district.

After the conclusion of the training, City Hall said that authorities will consistently check the licenses of online taxi drivers.

“There were 215 drivers that attended the first week of training, while 631 came for the second week,” Mr Piseth said. “After training, they will be given an exam in order to obtain a driver’s license. Because of this, a lot of them have come.” 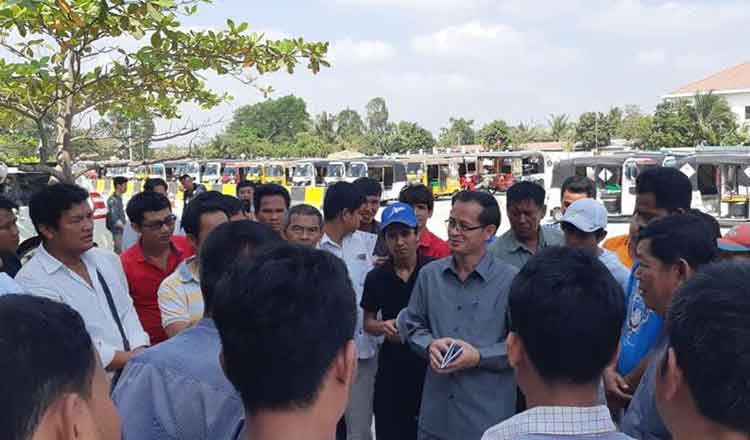 Luv Lavy, marketing general manager for PassApp, said the company is encouraging its drivers to attend.

“We send our drivers to learn every Saturday. It is beneficial because drivers can get more knowledge about traffic laws and they will get a driver’s license,” Mr Lavy said.

Ou Sopheap, a driver who has a license, said the license serves as protection against police.

“When we drive without a license, it feels like police are highly attentive of our endeavours,” Mr Sopheap said. “When we have a license, we do not fear police when on the road.”

“It is good that the authorities are offering this free course because all drivers need this,” he added.

Ride-hailing apps such as PassApp and Grab have gained popularity over the last few years due to their low fares, convenience and transparency. Many traditional tuk-tuk and rickshaw drivers have made the switch in order to take advantage of the coverage the technology provides.

Sum Sopheak, a rickshaw driver who attended the training, said he is able to earn more money using a ride-hailing app.

“Before, I used to drive a traditional tuk-tuk, but I’ve changed because I can earn much more,” Mr Sopheak said.