There will probably be no better night than last Tuesday’s – for a foreign brass band in Phnom Penh, at least. At Hops Craft Beer Garden & Restaurant, German group LaBrassBanda gave out an inexplicably addictive performance, filling the outdoor stage with their distinct Bavarian sound.

Bursting into the stage in their lederhosen and casual t-shirts, the band’s seven members rocked the night as they performed a mix of folk music, punk, reggae, jazz, techno and brass. And even when their songs are sang in German, there’s no stopping LaBrassBanda to take the audience high and stomping their feet to every beat. Oh yes, LaBrassBanda were all barefooted on stage.

“There is a certain rule in our performances,” said lead vocals Stefan Dettl, “the rule is for you to just have fun and dance to our music even if you don’t understand it.”

And the cheering crowd certainly did. Stefan asked everyone in the ground to move eight steps forward, eight steps backward, raise their hands and dance freestyle.

From stirring harmonies and reggae rhythms to superbly upbeat pieces, LaBrassBanda songs just effortlessly made everyone dance and party.

Founded in 2007, the band has been touring around the world for 12 years now. The band had been exporting their sounds to the US, Austria, Thailand, Zimbabwe and Siberia. They have had performed in beer tent concerts, huge festivals and in front of thousands of fans in Munich arena. 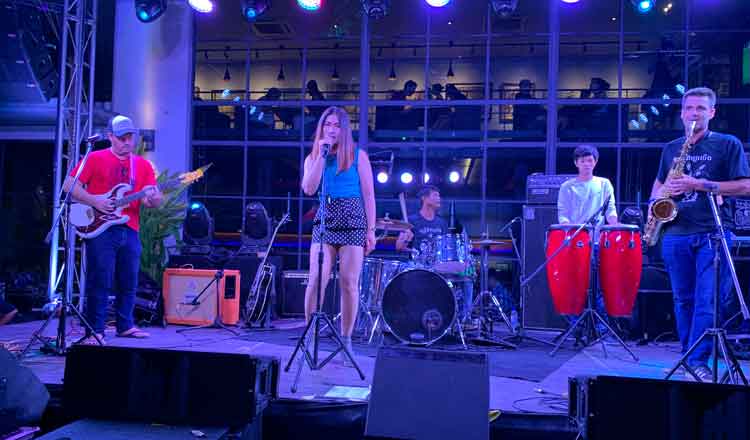 And their first and only concert (but hopefully not the last) in Cambodia was made more than memorable with CSP Mothership as opening act.

Singing some of the most popular Khmer classics such as ‘Knhom Min Sok Chet Te’, CSP, as expected, was a total crowd drawer. CSP’s founder, Julien Poulson, didn’t forget to honour Kak Chanthy, the former vocalist of the band who passed away last year. CSP Mothership’s vintage Khmer rock sound added another dimension to the amazing night at Hops.

It was indeed a music event to be remembered! LaBrassBanda + CSP Mothership – what more could we have asked for?

Women, put your health on top!