Home - A mother’s wish for her two daughters

A mother’s wish for her two daughters

Nhek Ren is a true inspiration in her small village of Pu Tru, in the hills of Mondulkiri province. Though she dropped out of school when she was in Grade 8, she dreams of a different future for her two daughters. Nhek Ren confides in Victoria Laroche Creux that she will try her hardest to motivate her daughters to continue school until grade 12, ‘even if it’s hard and even if we don’t have a lot of money’.

In the small village of Pu Tru, in Mondulkiri province, Nhek Ren has big dreams for the future of her two daughters.

“When I was young, I didn’t receive education, so I want my daughters to go to school so they can have good jobs. They could work in another country. I don’t want them to be farmers like me,” said the 21-year-old mother while her daughters were busy playing with a puppy outside.

Nhek Ren dropped out of school when she was in Grade 8 and dreams of a different future for her two daughters – four-year-old Nhoy Sreyploy, and two-year-old Nhoy Sreyply. Nhek Ren works as a farmer and a labourer when she is not at home taking care of her daughters or doing house chores. Her husband, Sran Nhoy is a 23-year-old farmer and a labourer as well. They live with their daughters and Nhek Ren’s parents and youngest sister, who is now in Grade 6.

“I want to send my daughters to university in the future,” she said quietly, but determinedly.

Nhoy Sreyploy has been attending the Community Preschool Patru Ler in Pu Tru village for a year and was enrolled as soon as she turned three years old.

“Before she attended preschool, she couldn’t speak properly, but after attending preschool she came home and said greetings and told me what she learnt during the day. She cannot write or read yet, but she just learnt to draw,” explained Nhek Ren.

“My youngest daughter is two and she already goes to school with her sister. But she will be officially enrolled next year,” added Nhek.

The youngest daughter, Nhoy Sreyply, accompanies Sreyploy to preschool every day and she will be officially enrolled when she turns three years old but, in the meantime, she is learning a lot from her sister. 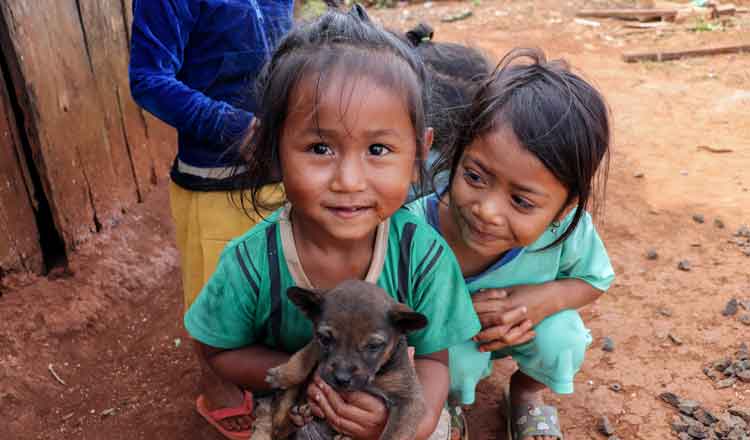 Nhoy Sreyploy is among the 24 preschool students that received school materials and a school uniform from Saen Monourom Commune in 2018.

The UNICEF Community Development section has been working closely with commune councils in different Cambodian provinces in the past years. In 2014, a Social Services programme was developed with UNICEF support. As part of the project, commune chiefs received trainings on how to use the new Social Service Implementation Manual. They learn new techniques, such as village mapping and data collection, to identify vulnerable households in their commune.

“There are 864 households in the commune and about 100 of them are identified as vulnerable,” said Tvan Trel, who has been the commune chief of Saen Monourom Commune for the past six years.

“In the future, I want to share my knowledge about social services with all the village chiefs in the commune to better identify the poor households,” explained Tvan Trel.

The commune also provides food supplies such as rice, salt and soy sauce, but also school materials and blankets for vulnerable households.

Nhek Ren and her family are identified as a vulnerable household in Saen Monourom Commune and received food supplies for the first time in 2018.

Thanks to the commune support in school materials but also in counselling parents about the benefits of education, Nhek Ren is aware of the importance of sending her daughters to school.

“I will try my hardest to motivate my daughters to continue school until grade 12, even if it’s hard and even if we don’t have a lot of money,” she confided.

Nhek Ren is a true inspiration in her small village of Pu Tru, in the hills of Mondulkiri province.

“I don’t know what kind of job I wish for my daughter. It’s my daughters’ decisions and they will decide on their own when they are old enough,” said Nhek Ren, confident about her daughters promising future. UNICEF Cambodia