Women’s Affairs Minister Ing Kantha Phavi and National Assembly president Heng Samrin yesterday highlighted an increase in the number of women who are working in the public sector during a celebration to mark the upcoming International Women’s Day on Friday.

Ms Kantha Phavi said females accounted for 34 percent of civil servants in 2009 and rose to 41 percent in 2017.

“The percentage of women who hold top positions has increased from 16 percent to 24 percent – there are now 7,045 women among a total of 29,691 civil servants,” she added, noting that women also serve as provincial and deputy governors, and ambassadors and diplomats. “There were four female ambassadors and 49 female diplomats last year.”

She said that the number of women who participate in politics has also increased.

Ms Kantha Phavi said that last year, 19.35 percent of senators, 20 percent of lawmakers and ten percent of expert committee members at the National Assembly were women.

“Moreover, the number of female commune chiefs have increased from 42 in 2002 to 130 among 1,646 commune chiefs last year,” she said, adding that Cambodia’s World Economic Forum gender gap rank improved from 112 in 2006 to 93 last year.

As for International Women’s Day, the Women’s Affairs Ministry has chosen to promote gender equality and social protection for human resource development.

“The government has released a political framework for social protection in order to provide benefits to children, pregnant women, disabled and old people,” Ms Kantha Phavi said, adding that challenges still remain, such as preventing violence on women and children.

Mr Samrin said the government will continue to support pro-women initiatives, especially when it comes to mothers. 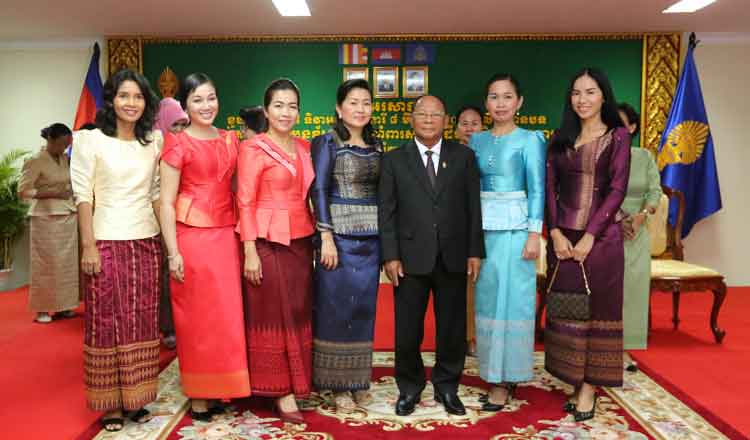 “Cambodia has implemented social protection policies that were carried out for pregnant women and garment workers,” he said. “Especially when women are delivering babies – they have a three month maternity leave and will receive 120 percent of their salary.”

“Additionally, 49.24 percent of female university students last year managed to obtain their bachelor’s degree,” Mr Samrin added. “In 2017, the percentage was at 46.67 percent.”

Despite the numbers boasted by the government officials, Ros Sopheap, executive director of Gender and Development for Cambodia, said the government must do more to promote gender equality.

“I think there are not enough women working in the government,” Ms Sopheap said. “If we want to have gender equality in our society, all political parties must implement gender equality policies and nominate more women to be their candidates.”

Foreigner-led cybercrimes on the rise: Report

Prisons told to crack down on inmates using phones