National dress code is not only representing the country but also an identity of the nation. Last Friday, about six representatives from different countries came together to display their traditional dresses at the Cambodia-Japan Cooperation Center (CJCC). More than 300 participants witnessed the elegance and the unique beauty of the costumes that represent the identities of their respective countries.

“Having an opportunity to wear “yukata” and walk on a ramp to show my national dress here is certainly a thrilling moment. I am happy thatI can show people, especially Cambodia people, my identity through my dress. Each of the dresses from other countries are unique and beautiful.”

According to Wargo, the name “yukata” comes from the word “yu” (bath) and “katabira” (under clothing). The “yukata” was also worn by Japanese warriors and by the Edo era (1600-1868). It was widely worn by Japanese people because of the cooling garment which made with straight seams and wide sleeves. Unlike formal “kimono”, “yukata” are typically made of cotton rather than silk or synthetic fabric, and are unlined.

“Chut thai phra ratcha niyom”, Thailand’s national clothing, also caught the attention of the audience. According to Cultural trip, the full name of Thailand’s national clothing is chut Thai phra ratcha niyom, often abbreviated to simply “chut thai”, which means “Thai dress that has been royally endorsed”. As the nation’s official costume, chut thai have been worn by Thai people in many kinds of formal occasions. Queen Sirikit, wife of Thailand’s late King Bhumibol Adulyadej, was responsible for the establishment of “chut thai”.

Laos also brought its country’s pride as its national costumes were shown during the fashion show. Laotian traditional costume is known as “sinh” and “salong”, both used differently and have diverse style and colours. The traditional “sinh” set of Laos women often consists of three main parts – a sinh, a suea pat, and pha biang. “Salong”, meanwhile, are big pants in various colours. Laos men often wear these special pants in important events, ceremonies and even in contests. Salong is often combined with a shirt, knee-length white socks and a pha biang.

Vietnam’s traditional costumes were also well-applauded. The “Ao Dai” was so elegant and astonishing in the runway. “Ao Dai” or long silk tunic has several kinds, depending on which Vietnamese region it is worn. The dress is not as common as it used to be in Vietnam’s growing cities. But during last week’s traditional fashion show, it took the spotlight it deserved.

Myanmar also proudly displayed its national costumes – “longyi” (for men) and “thummy” for women. The two attires are very different from each other, but they represent the culture, tradition, history and traits of their country, setting a strong impression among foreign tourists. “Thummy” has little similarities with Lao and Thailand’s national costumes, but unlike other countries where traditional costumes are worn only on special occasions, Myanmar wears their costumes every day.

Cambodia’s national pride was the highlight of the day – “Sampot Chang Kben”. Cambodia’s “sampot” includes not only a skirt but also pants. “Sampot chang kben” has a length of over nine feet and width of around three feet. To wear, “sampot chang kben” is wrapped around the waist, covered around the body, and tied a knot between the legs and secured by a sparkling belt. “Sampot chang kben” is made from cotton or silk, that’s why high- and middle-class women in the past wore it every day. But nowadays, it’s worn by all classes of women and men on special occasions such as wedding, festivals and Khmer New Year.

All the national dresses presented on the fashion show do not just depict the beauty of each country’s textiles and intricate designs; the dresses depict their countries’ culture and people. 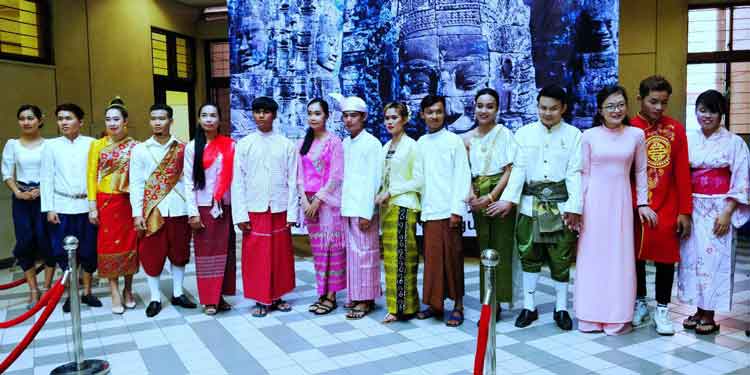