More than a thousand workers of W&D garment company in Meanchey district marched yesterday to the Labour Ministry urging it to intervene in their labour dispute and demand that all workers are allowed back to work.

They marched from the factory holding banners to demand the company take back all workers who were sacked after they protested.

On February 13, the employer said the workers could return, except for 127 workers who they said incited other workers to protest against the factory.

Chea Sokpha, a representative of the workers, said yesterday that a thousand workers would not return to work because they wanted the company to let everyone return together.

“We need the company to allow them all to return to work,” she said. “No one persuaded us to protest. So the company should allow us all to return, and not discriminate against some workers.”

She said the company discriminated against older workers, men and pregnant workers.

At the ministry, representatives of the workers were allowed in for a meeting with ministry officials.

Ms Sokpha said later that an official told the workers to wait for a solution next month.

“We still don’t have a result,” she said. “Now officials let us wait until March 6.”

“They have delayed again and again,” Ms Sokpha added. “We have protested for more than two month now, but we have not had a solution.” 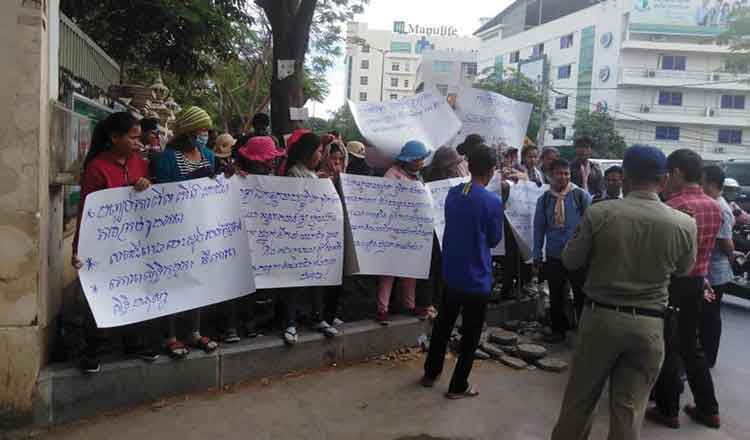 Another worker who declined to give her name said the workers earlier made demands over their seniority indemnity, but now they had stopped protesting for this claim.

“We demand only that the company allow us all to return to work. We really need jobs to support our livelihoods,” she said.

Deputy district governor Dy Roth Khemrun said that out of 1,800 workers who protested last month, 742 had agreed to return to work.

A further 1,058 workers had not agreed to return because they wanted the company to allow 100 workers whose names were on a sacking list to return to work together, he noted.

“We suggested that they should not march to the ministry or Prime Minister Hun Sen’s house because it affects public order on the streets while they are waiting for a solution because the ministry is working to find a solution for them,” he said.

At the end of last year, nearly 2,000 W&D workers went on strike to demand seniority bonuses in a package before 2019.

Factory bosses decided to sack more than 1,200 workers for failing to obey a court order to return to work.

On January 26, the Garment Manufacture Association in Cambodia issued a statement on the dispute.

It said the factory’s refusal to pay seniority indemnity complied with official orders. Employers had the right to terminate workers who continued to strike.

It added that the government’s requirement for employers to pay seniority indemnity prior to 2019 twice a year was meant to ease the burden and cash flows of factories.

“Thus, the factory does not have any obligation to pay seniority indemnity prior to 2019 as a lump sum payment,” it said.

Termination of workers who refused to work was in accordance with legal procedures in the case of arbitration council orders to return to work.