Vietnamese President Nguyen Phu Trong yesterday began the first day of his state visit to the Kingdom with an audience with King Norodom Sihamoni and Queen Mother Norodom Monineath.

According to a Foreign Ministry statement last week, Mr Nguyen will also meet with high-ranking government officials, including Prime Minister Hun Sen, and is expected to witness the signing of a number of documents.

Mr Nguyen landed in Phnom Penh International Airport yesterday and he and the Vietnamese delegation were escorted to the Royal Palace where Mr Nguyen was received by the King.

At the Royal Palace, Mr Nguyen laid a wreath for the late King Father Norodom Sihanouk before being granted an audience by Queen Mother Norodom Monineath.

He will then proceed to the Independence Monument to attend a wreath-laying ceremony with National Defence Minister General Tea Banh. 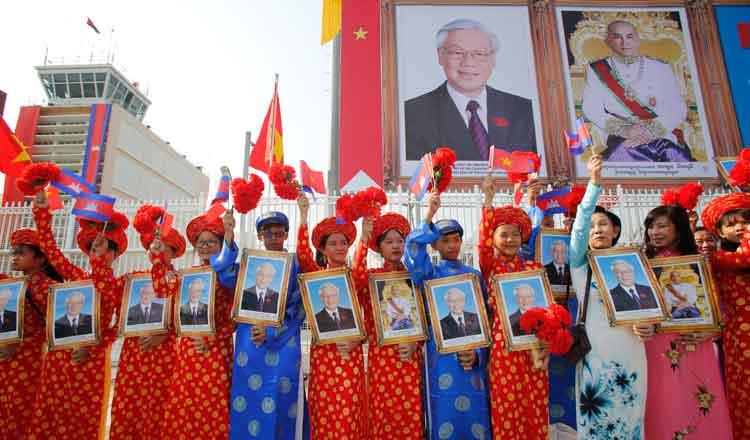 Ahead of the visit, Vietnamese Ambassador Vu Quang Minh told local media that this was Mr Nguyen’s first visit to Cambodia as both Party General Secretary and President of Vietnam.

The visit aims to enhance the mutual trust and reiterates the importance the Vietnamese Party and State attaches to ‘sound neighbourliness, traditional friendship, comprehensive cooperation and long-term sustainability’ with Cambodia.”

“The Vietnamese president is visiting Cambodia on an invitation from our King.” he said. “The visit reciprocates our King’s visit to Vietnam previously.”

“We will strengthen relations and cooperation between our countries and exchange a number of documents related to bilateral cooperation,” Gen Banh added.