Health Minister Mam Bun Heng yesterday said the number of drug addicts who were treated and rehabilitated last year rose by about 70 percent when compared to 2017.

Speaking at a workshop on “Drug Abuse Treatment and Rehabilitation” Mr Bun Heng expressed his optimism that efforts to rehabilitate and treat drug addicts in the Kingdom will result in a continued annual increase.

“Those receiving treatment are increasing every year,” he said. “This can be seen by the 70 percent rise in the number who sought help at public [commune] health centres last year when compared to the previous year.”

He noted that the number of drug addicts receiving treatment at community-based drug centres in the Kingdom has also grown.

“This success was not achieved by accident, but it was the result of joint hard work carried out by relevant institutions, development partners and friendly countries.” he noted.

“The reasons behind the increase in the number is that more rehabilitation centres have been set up and anti-drug campaigns have also increased,” he said.

Gen Vyrith said that the Health Ministry increased the number of treatment centres from more than 200 in 2017 to 431 last year, adding that during the anti-drug campaign last year 40 percent of the drug addicts were sent for treatment and rehabilitation by their families.

However, Gen Vyrith said the actual data on the number of drug addicts who were treated and rehabilitated last year is still being compiled.

“We must also have more efficient treatment at state-run and private rehabilitation centres and need more volunteers to help treat addicts at national hospitals, provincial hospitals and commune health centres,” he said.

Mr Kim Yan added that job training provided to addicts during their treatment is necessary to pave the way for them to find employment after they leave the centres. 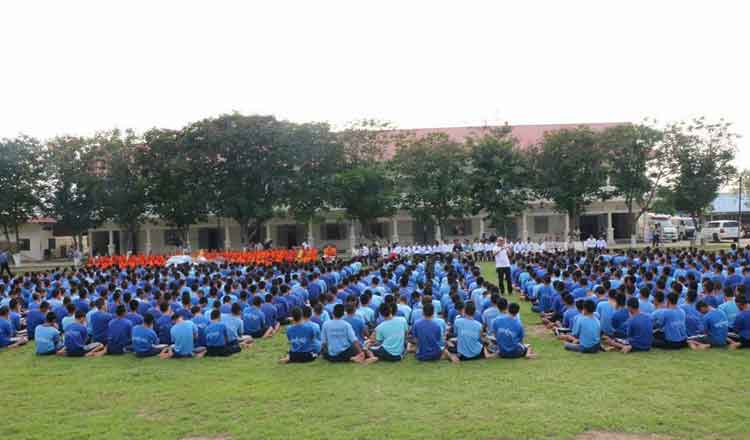 “We need to prepare specific mechanisms to provide vocational training for them so that they will be able to find jobs after treatment.” he said, adding that those who receive treatment at rehabilitation centres could easily integrate with their communities.

Mr Kim Yan noted that most provincial administrations are committed to create more temporary rehabilitation centers to reduce the number of drug addicts in their provinces.

According to a recent Interior Ministry report, last year the authorities cracked down on 8,002 drug cases, arrested 16,216 people and seized 536. 36 kilograms of all types of drugs.

It added that the authorities also cracked down on 74 major cases involving more than one kilogram of drugs and arrested 83 people, including 19 masterminds.