LONDON (Reuters) – Manchester United’s Ander Herrera and Paul Pogba headed first-half goals to claim a 2-0 win that dumped FA Cup holders Chelsea out of the competition and secured a place in the quarter-finals in an intense tie at Stamford Bridge on Monday.

Spaniard Herrera finished off a fine move with a precise header from Pogba’s cross just past the half-hour and United’s French midfielder scored himself when he nodded powerfully home from a Marcus Rashford delivery before the break.

It was a measure of revenge for United, resurgent under interim coach Ole Gunnar Solskjaer, who lost to Chelsea in last May’s Wembley final under their former boss Jose Mourinho.

“It is a beautiful win,” France midfielder Pogba, who had been sidelined under Mourinho, told the BBC.

“Today was a great performance from the team, all of them… The team helped me get to my best. I give everything for them. They help me score goals and get assists. We are enjoying playing together.” 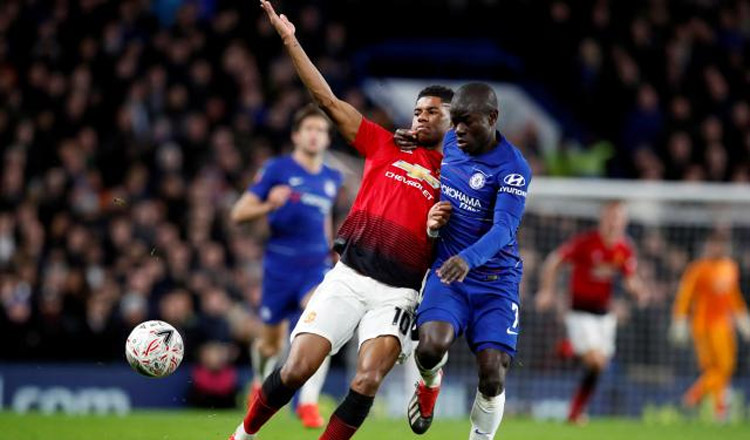 After the game United were drawn to face Wolverhampton Wanderers at Molineux in the quarter-finals.

“An away tie again after Arsenal and Chelsea… We’ll have to do it the hard way, Wolves are a tough team to play against,” Solskjaer said.

“The performance tonight was fantastic, our tactics worked. We asked our midfielders to press higher and get into the box and it worked. The defending in the second half was fantastic.”

The fifth round defeat piled more pressure on Chelsea coach Maurizio Sarri, whose side were hammered 6-0 last week in the Premier League by United’s neighbours Manchester City. Chants of “sacked in the morning” broke out in the second half.

Wolves and Palace ease through