Fourty-seven Malaysian nationals accused of fraud and running an illegal gambling in Banteay Meanchay province yesterday left for their homeland after charges against them were dropped.

Shahril Mohd Ali, former detainee, said “until today, going home was a dream. We never knew this day would ever come,” as the 47 Malaysians arrived at the Siem Reap International Airport yesterday.

The last time he was there was when he arrived in November to take a job in Poipet city that was advertised on WeChat, a social networking app, in Sarawak which promised a monthly salary of $1,500. 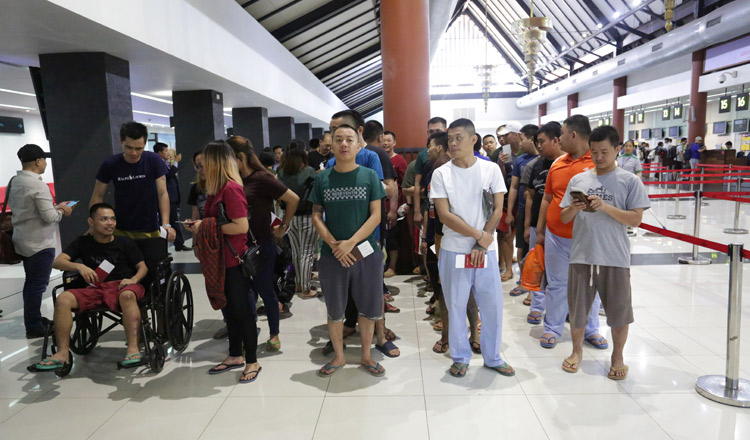 Dressed in shorts, t-shirts, jeans and a few in pyjama bottoms donated to them, the detainees, aged 19 to 44, left without their luggage and personal belongings they came with – items that were confiscated by police.

“All our clothes were taken when we were arrested by the police, but it doesn’t matter because we are going home. We can buy more clothes there,” said former detainee Margaret Muna.

Yesterday, four Malaysians returned on AirAsia to Kuala Lumpur at 8.30am, and the rest travelled back to Kuching on a charter at 10am along with Malaysian officials, including Sarawak Welfare Minister Fatimah Abdullah, and lawmaker Wan Junaidi Jaafar.

Their return was facilitated by Senior Minister of Special Mission Othsman Hassan, with the help of Prime Minister Hun Sen and his ministries, as well as the Malaysian Embassy in Phnom Penh while in Malaysia, the Sarawak government footed the undisclosed bill for the flight.

“We have to abide by our laws here, hence the time required for the legal process involving immigration law and airspace,” Mr Othsman said.

As they waited to board, the group chatted with the Cambodian authorities including Mr Othsman.

Two nights ago, he advised them not to be fooled by job advertisements in foreign countries and to verify it with the Malaysian Embassy in the respective countries.

“I am not sure if your experience was good or bad in Cambodia but I can say our heart is good. We wanted to help because of our relationship with Malaysia,” Mr Othsman said.

“We want to also ensure that they undergo counselling so that they feel positive again, and organise empowerment sessions with the detainees to educate and create awareness to other youths on the dangers of bogus jobs overseas,” Ms Fatimah said.

Ms Fatimah said the detainees are “victims”, and the Malaysian police will need to investigate the case.

“The law needs to take action on the culprits. It must find out who is behind the alleged online gambling scam, and their modus operandi,” she said.

The charges relating to illegal online gambling operations against the detainees were dropped after the intervention of Mr Hun Sen, who learnt that they were victims of a job agency syndicate.

In a statement on Saturday, the Malaysian Foreign Affairs Ministry thanked Mr Hun Sen and Foreign Minister Prak Sokhonn for the personal attention given to the matter, and the cooperation given by several Cambodian ministries.