As the grand final of the 7th Annual Tiger Street Football Festival closes in, there were plenty for fans to shout about in Kampong Cham as it played host to the seventh part of Tiger’s captivating football roadshow.

The Kampong Cham leg got underway on Saturday with teams fighting it out in the hope of securing qualification spots for the grand final. 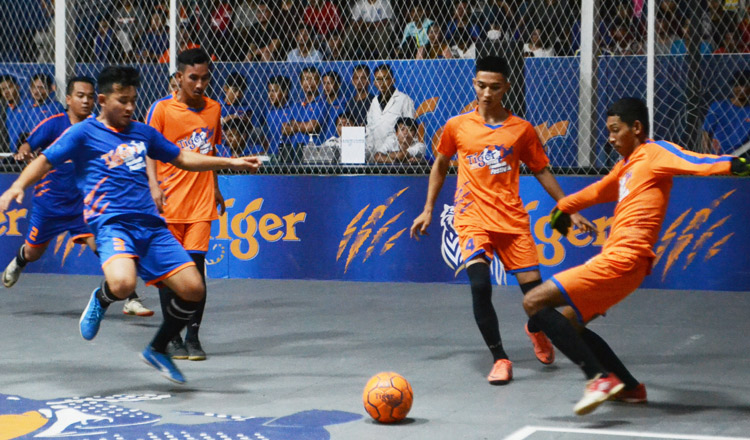 In yesterday evening’s final provincial showdown, as four-time winners Inter KPC made it five provincial wins in a row to seal their place as winners with a 2-0 victory over Dey Lot An Veng Srun. Both goals came in a frenzied first half of action.

The first came via an unstoppable pinpoint finish into the top corner early in the half before a second was delivered into the back of the net seconds before the whistle for half-time.

A busy second period saw both sides go close and a heavy fall saw a player stretchered off. Despite sustained pressure from the opposition, and the fans, Inter KPC preserved their lead to claim the win.

The win saw Inter KPC rewarded with the $1,500 provincial prize while the runners-up received $1,000.

Organisers announced they are set to bring Brazilian star Ronaldinho to Phnom Penh for the grand final. His mesmerising tricks, overhead kicks, ‘blind’ passing and dribbling led him to glory with both country and club.

He proved decisive in Brazil’s victory in the 2002 FIFA World Cup as well as in FC Barcelona’s triumph in the 2006 UEFA Champions League final.

In 2017, Barca appointed the Brazilian maestro as Global Club Ambassador. He is also part of the Legends project, a team of former players who take part in skill clinics, training sessions, among other activities.

The festival next travels to Kandal for a March 3rd date. Teams from Kandal, Prey Veng, and Svay Rieng are eligible to enter.

Nou Srey Pov dominates at ONE