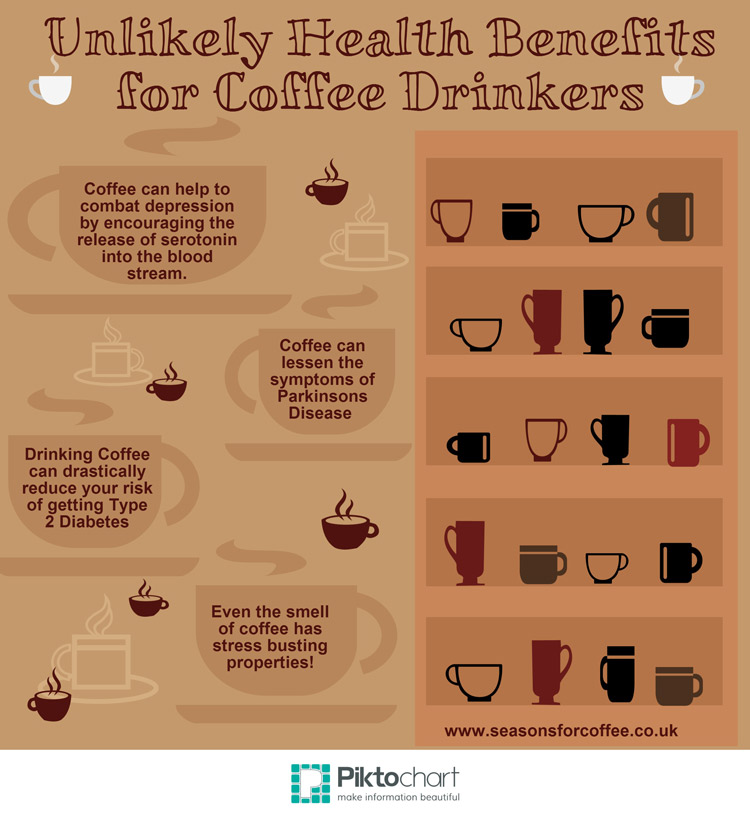 Coffee – an elixir of life – discovered six centuries ago, has grown to be the champion of all brews in this century. Why is this so? Is coffee beneficial to health? Let us explore what science has got to say about this “brew of the century”.

We just celebrated Chinese New Year, so I thought I should skip the topics on diseases and focus on something appropriate to the festive mood. At a split of a second, the word COFFEE started flashing in my mind without competitors. Guess it was inundated with the images of Starbucks, Coffee Bean, Cafe Amazon, Brown Coffee, etc. We should all note how much our subconscious mind is being influenced by this invigorating elixir of life.

Why is it not chocolate, strawberry or something else? The secret lies in that substance that glues itself so tenaciously to our mind and overwhelms us. Whatever that creates an euphoria, or the “wow factor” in our mind and stays on in our memory is indeed addictive. We “fell in love” with it, and allowed it to drive us crazy to continue craving for the magic substance inside it, from time to time, and never ever asked why. Caffeine is the name of that magic substance.

Is coffee good for health? This question has often cropped up, not just in the coffee shops but everywhere where the brew is served. To answer to this, let me quote Dr. Sanjiv Chopra, a professor of medicine at Harvard Medical School who recently said, “More recent evidence indicates that rather than being dangerous, coffee may also offer substantial benefits, including protection against heart disease, Type 2 diabetes, liver cirrhosis, Parkinson’s disease, dental cavities, colon cancer, prostate cancer, and even suicide. It is known to bring relief for asthma, increase endurance and concentration. It also increase the absorption of other medications. And contrary to conventional wisdom, it appears to lower the risk of one being hospitalised for an arrhythmia (abnormal heart beat).”

Caffeine may cause a short dramatic increase in blood pressure. The effect on the blood pressure of individuals regularly drinking caffeinated coffee varies from person to person. Some of these people have higher average blood pressure. Others develop tolerance to caffeine. Thus, the effect of caffeine on blood pressure is short lived. People who are concerned about the transient caffeine’s effect on their blood pressure should try limiting their coffee consumption to two cups or half a litre (or 200 milligrams) a day. It is advisable for people with high blood pressure to avoid coffee before activities that are known to increase blood pressure, such as weightlifting, hard physical labour, pumping exercise, etc.

Scientists at Rutgers University, New Jersey recently discovered a fatty acid called EHT (Eicosanoyl-5-hydroxytryptamide), found in the coffee bean’s waxy coating that is believed to team up synergistically with caffeine to protect our brain against Parkinson’s disease and Lewy body dementia – the two much feared progressive degenerative diseases of the brain that are currently incurable. They may be preventable to some extent by simply drinking coffee. This discovery was recently published in the Proceedings of the National Academy of Sciences.

With regard to cancers, American Cancer Society researchers, Susan Gapstur, PhD, and Marjorie McCullough, ScD, provide some insights during an interview.

According to them, numerous studies have shown that coffee drinking is associated with a lower risk of dying from all causes of death. However, associations with cancer overall or with specific types of cancer are unclear. They also found that coffee drinking is not a cause of female breast, pancreas, and prostate cancers, but may reduce the risk of uterine endometrium (womb) and liver cancers.

Recent studies show that coffee may lower the risk of several types of cancer, including head, neck, colorectal, breast, and liver cancer. Hundreds of biologically active compounds including caffeine, flavonoids, lignans, and other polyphenols are found in roasted coffee. These and other coffee compounds have been shown to increase energy expenditure, inhibit cellular damage, regulate genes involved in DNA repair, have anti-inflammatory properties and/or inhibit metastasis (spread of cancer cells), among other activities. All these processes tend to lower the risk of cancer development.

There is also evidence that coffee consumption is associated with lower risk of insulin resistance and type 2 diabetes, that have been linked to higher risks of colorectal, liver, breast and endometrial cancer incidence and/or mortality.

The amount of coffee to consume daily has always been a popular question. Some sources suggest that 4 cups of coffee are safe for most healthy adults. In terms of caffeine content, this is equivalent to 10 cans of cola or two “energy shot” drinks. It is assumed that an average 8 ounce cup of coffee contains around 100 milligrams of caffeine.

Allow me to express some words of caution with regard to the benefits of coffee drinking. While coffee may be generally good for health, the amount of sugar in it, as it is commonly served, may turn the equation upside-down. As far as good health is concerned, in this era of abundance, except for the hardcore poor, sugar consumption is unnecessary.

Generally, most of us already have too much energy-packed carbohydrates from the voluminous cheap starch that we tend to overeat. Thus, we really don’t need the sugar that is so hazardous to our health. Thus, we should go for the 2-in-1 or perhaps just the plain black coffee without adulteration. This is a healthy compassionate coffee that negates the need to steal the milk from commercial cows. The PRISTINE BLACK COFFEE is still the BEST. After all, the real goody of coffee is the caffeine from the original black coffee beans.

Where a Cambodian legend beckons