Norng Chan Phal, who survived the Khmer Rouge torture centre S-21 as a child in 1979, has published a book documenting his family’s ordeal this week.

Eng Kok Thay, director of the Cambodian Institute for Peace and Development and author of “Norng Chan Phal: The mystery of the boy at S-21,” said that he and Mr Chan Phal spent one year researching his family for the book.

Mr Chan Phal was one of four child survivors found at the prison after the Khmer Rouge abandoned the capital and S-21. Mr Chan Phal and the other children were hiding under clothes behind the prison and were found by Vietnamese soldiers.

The 120-page book, of which 1,000 copies were published in English, details the horror of his and his parent’s imprisonment.

“This book is a very good lesson for the younger generation,” Mr Kok Thay said. “This book tells the story to the world to educate young people about the story of Norng Chan Phal and the Khmer Rouge regime.”

Mr Chan Phal said that advancing Vietnamese soldiers found him and other children in a pile of discarded prisoners’ clothes as Khmer Rouge soldiers fled.

After the Khmer Rouge regime was toppled, Mr Chan Phal and other orphans were gathered by the People’s Republic of Kampuchea to live in orphanages.

Mr Chan Phal, a 48-year-old father of two children, said that his father was arrested in December 1978 and jailed at Tuol Sleng. A few months later, he, his mother and his younger brother Norng Chan Ly were also brought to the prison.

Mr Chan Phal said that when he, his mother and his brother arrived at the building, Khmer Rouge militiamen forced his ill mother out of the truck.

“My mother got sick and could not get off from the truck and then they dragged my mother out of the truck and slapped her in the face for several times,” Mr Chan Phal recalled.

Mr Chan Phal said that he, his mother and younger brother were put in a cell on the second floor and bitten by swarms of mosquitoes.

Later, he and his younger brother were separated from their mother and transferred to another cell on the ground floor. 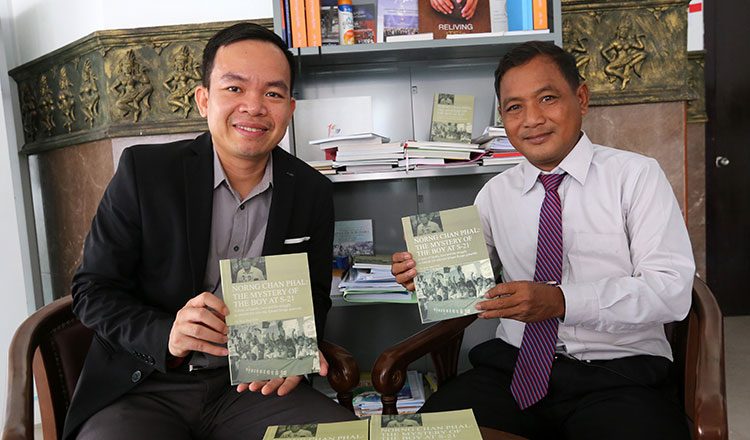 “One day, when my brother was very hungry, I looked at my mother through a window and I saw her looking at us,” he said. “That was the last time I saw her.”

Mr Kok Thay said he was inspired to write about Mr Chan Phal when he met the S-21 child survivor ten years ago on a DC-Cam researching trip to Vietnam to gather evidence related to the Khmer Rouge.

“We have to recall the past and remind ourselves where we came from,” Mr Kok Thay added.

He said that he will distribute copies of the book free of charge to Tuol Sleng Museum, schools, and orphanages.

“My message to students is to learn Khmer history because it was a tragedy,” he said. “They need to learn about the Khmer Rouge so that we can understand why we fell into an abyss and why the Khmer Rouge killed its own people.”