I recently published a story about how the dreaded “empty forest syndrome” seems to be creeping its way into Northeastern Cambodia’s Virachey National Park. Empty forest syndrome refers to a situation in which otherwise healthy-looking forest is mostly empty of any form of wildlife larger than a cocker spaniel. Many areas of the Annamite Mountains that divide Vietnam and Laos have already been almost completely “defaunated” – another dreadful word to add to the lexicon of the Anthropocene Era, and my fear is that this dreadful trend, if unchecked, will and probably is migrating into Virachey National Park, since Laos and Vietnam have already been largely hunted out.

Trekking and moto-driving through tens of miles of bamboo forest – probably one of the greatest stands in Southeast Asia – certainly gave me that impression – that there wasn’t much left in terms of wildlife. I think I heard one Crested Serpent Eagle cry out, heard maybe one Great Hornbill honking per day, saw a kingfisher or two, and a glance a couple of herons. Gibbons were not heard every morning and their eerie cries seemed to come from far away; one of our guides speculating that the Vietnamese had come in and hunted them all out. 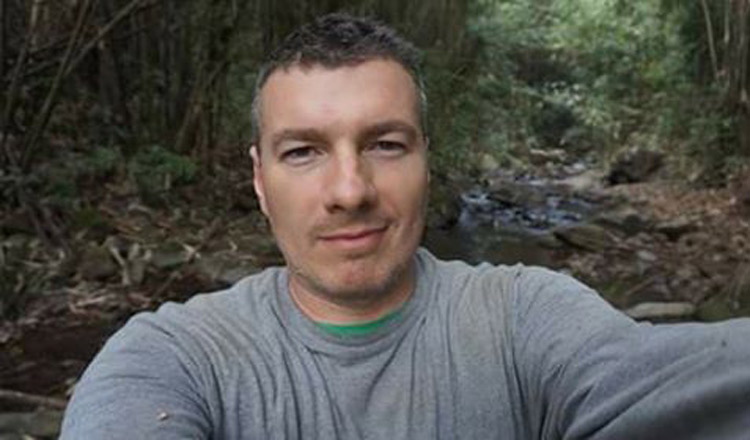 I often come away with a similar sense on my annual trips to Virachey, but the camera traps usually tell a different story. This time, the data from our SD cards pretty much aligned with my impressions from the forest. I just wasn’t getting a sense that there was an abundance of wildlife. But I think I should put things into better perspective here.

At our first camp beyond the last ranger outpost we ran off to check on the nearest camera trap, which hadn’t been serviced in about five months. Along the way we spotted a family of Red-shanked douc langurs, a beautiful primate listed by the IUCN as Endangered. In fact, the douc langurs of Virachey might very well be a unique hybrid species of doucs. When we reached the camera trap, the trusty $100 Bushnell Trophy Cam was still working and on it we found: dhole (which is also listed as Endangered), serow, and a host of birds that we had never trapped before. Not too shabby. No tigers or common leopards, to be sure, but still, not too shabby. 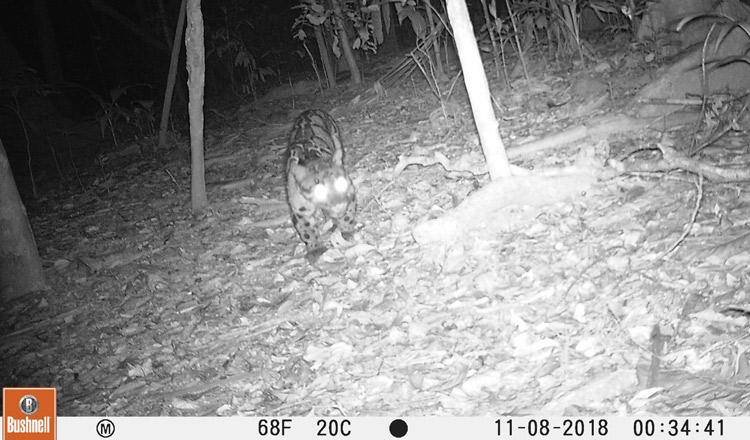 We pushed farther on, and finally climbed out of the bamboo and into evergreen forest, a different, ancient world. But still, where were the gibbons? While we did hear them on some mornings, we were never treated to some of the mind-blowing choruses that I have heard around the sacred Haling-Halang Mountain about five kilometers to the west. We had many cameras to check and we had to keep moving, but I always tried to stall for time to go through each SD card in my handheld phone in search of biological gold…like an elephant (which we rediscovered in 2017, again, near Haling-Halang) or a tiger. One camera, located in an ancient stand of trees with very little undergrowth, had about 1,200 shots on it. As I started to scroll through them I found several Sambar deer, which we hadn’t got in a while, but no sun bear, no black bear, no cats…what the heck was going on? I got about halfway through and my teammates insisted we had to move on; we could check the rest over some whisky at camp.

I probably should have had a little more faith, a little more patience, because on that card was a clouded leopard! “I told you so, buddy!” My hearty trekking partner Joel remarked. In fact, he had predicted that we would get a “cloudy” on that cam. Leopard cat also put in an appearance, and on the previous check, that camera gave us our first ever crab-eating mongoose. Later (after the publication of my story in Asia Sentinel), a cat expert confirmed that a big fluffy tail that was spraying our camera trap was that of a marbled cat. So, perhaps things aren’t has bad as I had portrayed. How many clouded leopards would really be in the same mountainous area? And we already knew that the topography was probably too extreme for elephants (in fact, our main quarry was Owston’s Civet, a species not yet found in Cambodia, but if it does occur in the Kingdom Virachey would be a prime candidate). Still, what happened to the bears? We were betting both black bear and sun bear regularly just months before.

One thing I can say for sure is that we did not come across a single snare trap throughout our long slog across a wide range of territory in the area known as Tbuen Mountain, which is kind of like a peninsula that juts up into Laos. That was encouraging. But my fear is that perhaps the further east one goes towards Vietnam, the less wildlife one is likely to encounter. And in fact, scrutinising Google Earth satellite imagery, I see that a dirt road leads all the way from the city of Attapeu in Laos right up to the border of Virachey, terminating at Tbuen Mountain, our new study area. Small arteries such as these allow foreign poachers to penetrate the most remote reaches of Virachey, and the damage they can inflict can be considerable.

So I lay no blame on the Park staff with their limited budget and non-existent NGO support, but on the location of our new study area, which I chose. Had we set up the cameras in the floodplain between the Phnom Veal Thom Grasslands and the Yak Yeuk Grasslands we might have found more elephants and others species, including Siamese crocodiles, which apparently still occur in a section of the O Lai Lai River.

So empty forest syndrome may or may not have come to part of Virachey National Park, but certainly not the whole park, and the park staff is fighting hard to protect what remains. That’s the point I want to make.

Gregory McCann is the project coordinator for Habitat ID and the author of the book Called Away by a Mountain Spirit: Journeys to the Green Corridor. All camera checks are paid for out of pocket by a ragtag of revolving team members, and if you’d like to help out with the next check you can do so at https://www.paypal.me/GregoryMcCann

Organ transplantation: You can save a life