Home - TIDYING UP with MARIE KONDO

TIDYING UP with MARIE KONDO

Ever since Netflix started to stream the reality series “Tidying Up with Marie Kondo”, I tried my best to get away from it. I pay no attention to any inviting suggestions like “Trending Now”, “Popular on Netflix” or to any meme and noise in social media.

Don’t get me wrong; I have nothing against this lovely Japanese girl. Let’s just say, “It’s not her, it’s me”.

I am a generally organised and control freak person, exclusively when it comes to work – I am very meticulous with procedures, methods and always tends to micro-manage and control the eventual outcome of what I’m doing. However, I’m a bit shy to admit that this attitude doesn’t completely translate into my wardrobe, my kitchen, my fridge, my bathroom or in any corner in my place. That is why I have been constantly dodging “Marie Kondo”.

I called it absurd at first; for why should cleaning your closet be a plot for a series? But just like any other viewers of this show, each episode, despite its slight boringness, will give you an “oh” or “hmmm” moment, that will later on make you wonder: “Oh… what if my closet is that neat and tidy?” or “Hmmm… maybe I’ll skip binge-watching this Saturday and try to reorganise my kitchen.”

Marie Kondo is a 34-year old organising consultant, author and a mother of two girls. She is pure Japanese, a heritage that has rooted in her techniques in tidying up places. Even at an early age, Marie was already obsessed in keeping her classroom’s bookshelf clean and organised, to the point that she was appointed bookshelf manager by her teacher.

At the age of 19, while studying sociology in Tokyo Woman’s Christian University, Marie part-timed in cleaning up houses to earn some extra cash, when she later on realised that tidying houses could turn into a much specific profession, and that’s when she started her own organising consulting business.

It was in 2014 that she rose to fame when her book “The Life-Changing Magic of Tidying Up” became New York Times best-seller and was purchased by millions of people and translated into various languages worldwide. It was then when Marie was named the “decluttering guru”.

Ask yourself: ‘Does it spark you joy?’

Marie’s tidying concept wasn’t exactly that groundbreaking or new at all. Much of it is based in a Japanese traditional religion called Shinto, a religion that focuses on ritual practices believing in animism, which means that most inanimate objects have souls and are somehow sentient to how we treat and handle them.

Applying the religious concept of Shinto would mean treasuring the value of each object that you possess. Marie Kondo believes that each object, regardless of its monetary worth, has its own spiritual value that should be respected and thanked for its amenities.

Every time Marie visits a household, she communicates to the house itself. Wearing a very subtle make-up, in her perennial skirt-sweater-stockings ensemble, Marie would kneel inside the house to meditate; and she always ends her meditation thanking the house for its years of service.

“Thank your stuff. It’s been working hard for you,” Marie often tells her clients.

The KonMari method is very simple. One by one, you talk to each item or thing, feel it and ask yourself: “Does it spark you joy?” If your intuition answers yes, then you keep the item and on to the next item, but if your gut answer is a no, then you thank that object, let go of it by properly discarding it.

But the question is: How will you know that the thing, a placemat for example, sparks joy in your life?

Marie answers this question simply with a full-teeth smile, “A thing sparks joy to you when you hold it and you feel a ‘Ting!’” – a personal response that even her interpreter just laughed out and couldn’t translate.

Give it a rest, let go

Yes, it’s that chiming “Ting!” that Marie says one could feel and hear by himself the moment he holds the object, which practically makes the KonMari method not that easy as it may seem, for it is something that’s completely intuitive.

In the series, you can see a wide-ranging reaction from different people whenever they start to ask themselves if this thing sparks joy in their life. Most clients would spend a lot of time justifying how something that was once useful, can eventually lose its value, thus needs to be disposed.

But it’s not a question of whether the thing is losing its worth or not; more like the question delicately borders on whether the thing is still giving you that happy and satisfied feeling whenever you use it, otherwise, give the thing a rest and let go of it. KonMari suggests that if you hesitated or said no, you donate it or give it to someone who can maximise its usage, for as long as the object is not yet garbage. If you feel joy or if you don’t feel joy; there’s no need to complicate your feelings towards it.

Nonetheless, you can’t help it – the process of simply sorting your things out could surely become a little bit complicated especially when emotions come into play, after all, the mere decluttering of your home could be mean decluttering your life as well. And this is where you get to learn and understand the art of letting go.

Letting go of things is practically one of the most profound takeaways in Marie Kondo’s tidying up series. Making clothes, books, or any material as symbolism, at one point in our life, we need to confront and assess which one in our surrounding continues to inspire or spark joy in our life. I believe such realisation is imperative for one cannot continue to burden himself and move forward alongside past emotional baggage brought about by people or situation. Amid the feeling of a constant stuck in reverse, one day you need to feel and hear that “Ting!” and finally tell yourself to let go. 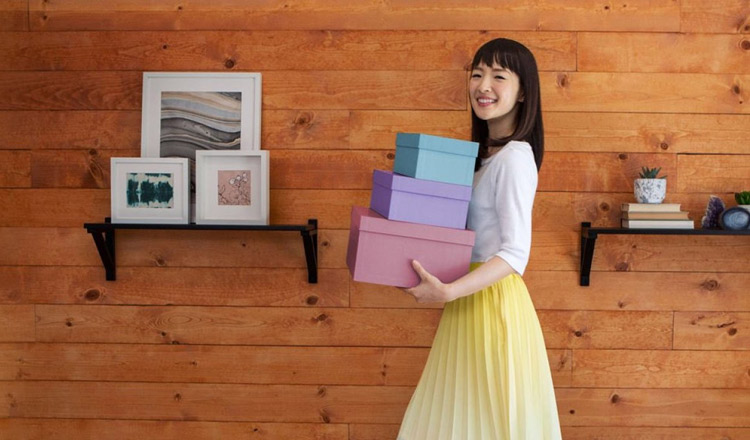 The simpler, the happier

Before reorganising your stuff, Marie always advises to take all of your things and put them in one big pile in one area. That way, you would realise how much you have.

Whether it’s clothes, books, shoes or even mugs, people always have the tendency to over collect things that do not necessarily serve us, either emotionally or physically. This materialistic world has often misled us from the truth that happiness is a simple filter that we can apply to a lot of excess things, beyond clothes or stuff.

Once I’ve come across this phrase: “Extravagance is often a picture of an unsatisfied life”. Very true indeed, a life lived with simplicity and content is much meaningful compared to a life lived with luxury yet full of hitches and constraints.

In this era where less means so much more, we need to be able to take hold of those profound things that truly mean something to us. Because more often than not, it is in simple things that we can find that true happiness.