Home - What if no war and genocide in Cambodia?

What if no war and genocide in Cambodia?

The genocidal Khmer Rouge plunged Cambodia into the dark ages that it lost out on the course of development that was sweeping across the region during that period. If the genocide did not happen, would Phnom Penh city be on par with Singapore, Bangkok or Kuala Lumpur? The visual impressions of a group of students, in response to this hypothetical question, catches Colin Grafton’s eye.

A year ago, students at the Phare Ponleu Selpak Arts School in Battambang were invited to imagine what Phnom Penh might look like today if there had been no devastation caused by the war and the ensuing brutality of the Khmer Rouge regime. In other words, had Cambodia followed a path of prosperity and uninterrupted development after that “golden age” of the sixties, what would it look like now?

The results display a common unity of theme with a diversity of detail. The Independence Monument appears in all but one of the paintings, but in different guises – large and central in some, but dwarfed in others by the huge edifices around it. In one painting it takes the form of a black shadow (or is it a hole?) in the centre of a scene otherwise dominated by sunlit trees and shining monuments. In others, it stands more discreetly to the side, as a partial frame.

What is the significance of this? Is it symbolic? Well, it could just be that the gallery where the exhibition is on show, and the Documentation Center of Cambodia which is organising it, are located within sight of the monument, and the students are from Battambang, so their visual impressions of Phnom Penh may fall within obvious limitations.

The buildings in the paintings are tall, monumental and sparsely windowed. The style seems to be vaguely European, certainly not Asian, at least in the traditional sense. Angkorean faces, complete with tree roots, sprout from the walls. Elephant heads, devatas and apsaras, and hands – the hands of dancers – incongruously adorn the architecture. One enormous disembodied hand supports a roof on its fingers. There are a few statues of kings or heroes, one being Battambang’s own Ta Dambong (“Uncle Stick”), but hardly any people at all. The nearest entity to a living presence is a devata encased in a glass prison who stares sadly out at the statues. Only one picture shows any human beings – three of them. There is a lone cyclo driver, and a woman in a long dress who sprawls languidly in a colonial era rickshaw. The rickshaw boy, bent forward, generates the only trace of tension in the picture.

There are trees, but they are bound and intimidated by the towering buildings, except when they form the borders or central dividing zones of avenues. Then they flourish and proliferate. One painting even has a host of cherry blossoms. I was glad to see the visions did not include the hideous black and yellow concrete slabs which have become so popular as road dividers. Do trees take up too much space? Perhaps they do if there is traffic, but the cityscapes of these young artists are free of that problem. Only one painting shows a few tiny cars trickling round a distant Independence Monument.

The prevailing atmosphere is reminiscent of a painting by Giorgio de Chirico, the Italian surrealist…or perhaps, minus the dust and dilapidation, of the streets of Phnom Penh in 1979. The subtitle to the exhibition is “What Would Life Be (Like)”. But in these scenes there is almost no life to be seen. A large eye watches from the wall of a building. A jar of water frozen in mid-topple spills its contents silently, like the hair of a Japanese ghost.

The artist Srey Bandaul, one of the founders of Phare Ponleu Selpak, who led the project by the students of the Visual and Applied Art School, has a simple answer to the “mystery”, however. He points out that the students were focusing on their vision of architecture and buildings, and therefore they were just not concerned with traffic or people.

The initiative for the project came from Youk Chhang, director of the Documentation Center of Cambodia (DC-Cam), who sees art as “an instrument of healing and… a bridge to reconciliation” that “reveals beauty amidst a tapestry of terror”.

The Center seeks to provide a platform for research and an accessible source of historical information, especially for the estimated 70 percent of the Cambodian population who were born after the collapse of the Khmer Rouge regime. Youk Chhang believes it is imperative that young people be informed so they can reach an understanding of their recent history and make progress towards sustainable growth, democratic integrity and human rights.

By imagining and creating a vision of a land untainted by its dark history, it is hoped that this exhibition will be one step towards an acceptance of, and a liberation from that past.

The paintings are on display at the Sleuk Rith Contemporary Art Gallery housed in the National Institute of Education to the north-west side of the Independence Monument. The exhibition will be open to the public until February 28, from 8am to 5pm, Monday to Saturday.

The gallery aims to encourage learning about the history and legacy of the Khmer Rouge and Cambodian art and culture through temporary exhibitions, weekly documentary film screenings and a public speaker series. It also contributes to the support of Cambodian artists by providing free space inside the century-old colonial building to display their work. 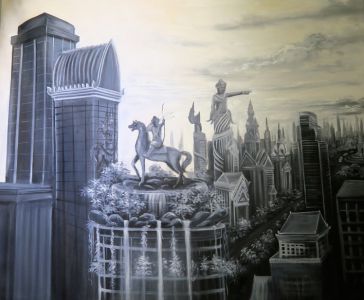 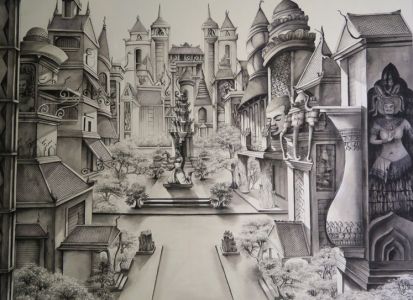 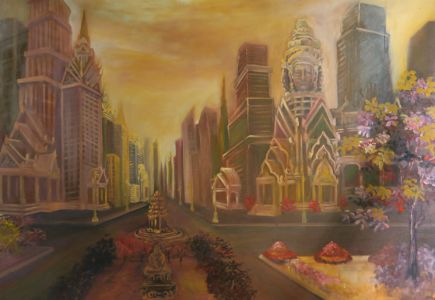 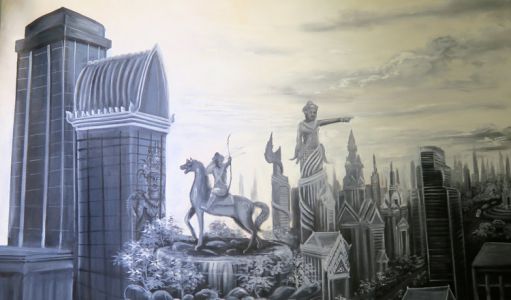 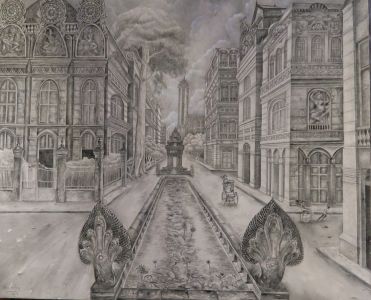 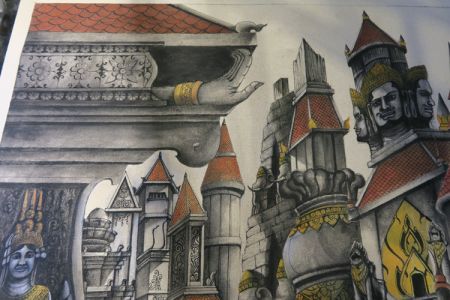 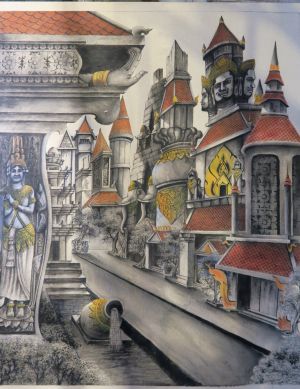 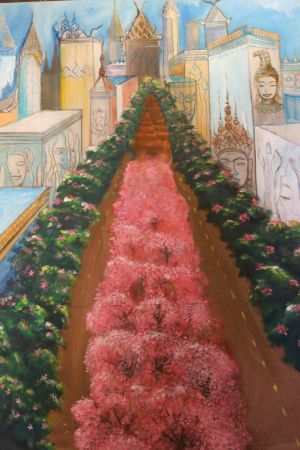 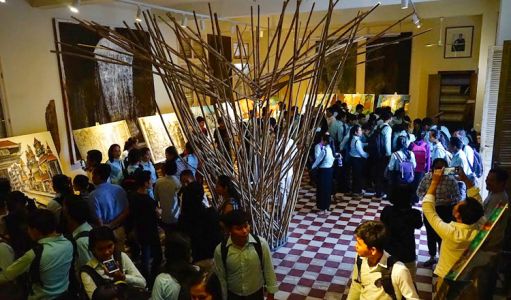 The Dreams of Miss Cambodia

A stable out of sight in Arey Ksat