Home - Man held for razing house in a jealous rage

Siem Reap Provincial Court yesterday charged a man who allegedly set fire to his house in a jealous rage because he suspected his wife was having an affair with another man in Thmar Puok district.

A court document identified the accused as Sin Nuy, 31, a construction worker living in Daun Keo commune, and his wife as Keo Louk, 29, a farmer. They have two young children.

The document noted that the incident took place at about 5pm on Saturday at the accused’s house in the commune’s Ta Sne village.

It said that Mr Nuy was arrested on Saturday and is charged with violence committed by a spouse or partner. He faces up to five years in jail and is now in prison pending trial.

Major Doung Samnang, a provincial anti-human trafficking and juvenile protection department police officer, yesterday said that on the day of the violence, the accused arrived home after drinking rice wine with his friends in the village. 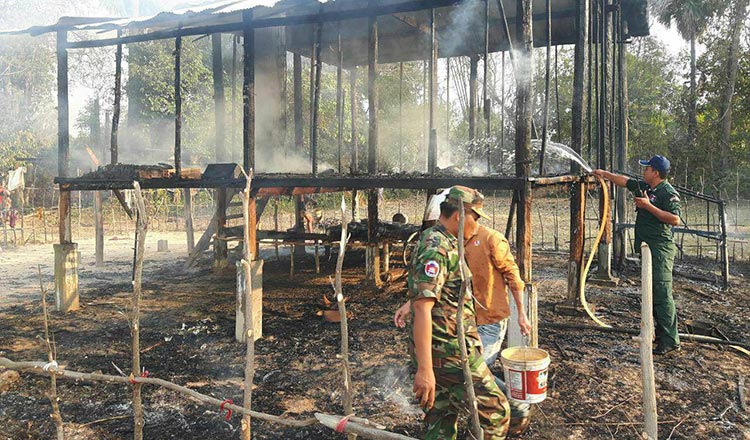 He said Mr Nuy then accused Ms Louk of having an affair with another man in the village, but she denied it.

Maj Samnang said the accused then beat his wife and she asked for a divorce but he did not agree.

“He was angry with the wife because he suspected that she was having a love affair with another man and had betrayed him,” he said. “He then took a bottle of gasoline and set fire to the house.”

“The fire completely destroyed everything in the house,” Maj Samnang said. “But the wife and their two children managed to escape and were unhurt.”

He added that after setting fire to the house, Mr Nuy fled from the scene, but was arrested by local police at about 7pm in the village.