Cambodian leaders are optimistic that international cooperation with organisations such as the Asia Pacific Parliamentary Forum can help each country meet United Nation’s Sustainable Development Goals by 2030.

In a speech during the 27th annual meeting of the APPF in Siem Reap province yesterday, Prime Minister Hun Sen said Cambodia wishes to strengthen its relationship with the region in order to maintain peace and have stable economic development.

He took the time to note that Cambodia was able to persevere through decades of civil war and unrest.

“We had two governments at one time that controlled more than two areas,” Mr Hun Sen said, referring to the civil unrest in the 1980s.

Despite the struggles, Cambodians were eventually able to reach a consensus during the 1991 Paris Peace Accords and end decades of war and conflict.

National Assembly president Heng Samrin yesterday said an organisation such as the APPF can help strengthen and expand cooperation in order to create a sense of understanding in the sectors of security, peace and development.

However, Mr Samrin also warned that failure to do so could lead to instability.

He said that APPF members are encouraged to cooperate in order to keep investments flowing.

“APPF members need to increase cooperation to push for more investments and free trade so that everyone can benefit,” Mr Samrin said.

Senate president Say Chhum also weighed in on how crucial peace and stability is to economic development.

“Cambodians and other peoples of the world wish to live in peace, even though each of us has different histories, and social and political systems,” Mr Chhum said. “Each country must safeguard its independence and sovereignty and fend off external interference in our internal affairs.” 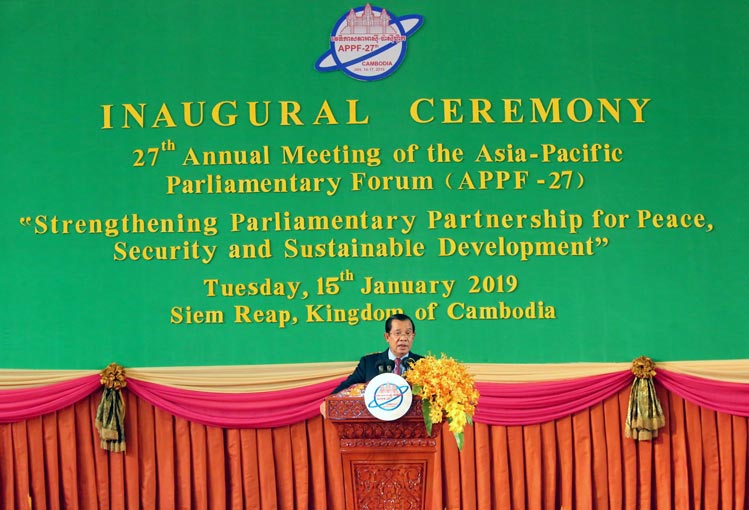 Takuji Yanagimoto, of Japan’s Liberal Democratic Party, yesterday said it is the responsibility of a politician to look after the well-being of the people. Mr Takuji said politicians must also maintain relations with foreign countries.

“We must strive to ensure peace and stability of foreign countries,” he said, adding that the APPF was founded in 1993 in order to promote mutual trust, respect and understanding among countries in a region where diversity is ubiquitous.

Nguyen Thi Kim Ngan, president of the Vietnamese National Assembly and chairwoman of the APPF, said yesterday’s meeting took place during a time of rapid change and complex development of regional and global affairs.

Ms Nguyen said despite the region’s economic standing, there are still many problems.

“There are many unresolved issues such as terrorism, cybercrime, religious tension, territorial conflict, transnational crime […] and climate change that hinder the betterment of the quality of life of everyday citizens,” she said.

Ms Nguyen noted that the Asia-Pacific has the potential to become a driving force for global growth and that the region should aim for expanded connectivity and enhanced cooperation.

King Norodom Sihamoni issued a Royal Message to be read during yesterday’s meeting.

“Cambodia is honoured and proud to host such an important forum to discuss emerging international issues, share our common concerns and perspectives, and seek holistic solution to those issues and challenges of the 21st century,” the message noted. “No single country, no matter how powerful it is, can address global issues alone. We need dialogue and international cooperation to solve them.”