Home - Cambodian view of the region

Cambodian view of the region

More than 1,000 Southeast Asian experts worry about the region in 2019. The report by the Asean Studies Centre at ISEAS-Yusof Ishak Institute also finds that the majority of these thought leaders are losing confidence in the US’s reliability and think that Washington is losing its influence in the region. Is this a good point for China? What does this augur for Cambodia? Chheang Vannarith tries to answer these questions.

The findings from the survey conducted by ISEAS-Yusof Ishak Institute, based in Singapore, provide an interesting perspective and outlook of the region. The findings also affirm that power shift is fast evolving, accompanied with uncertainty. And Southeast Asian countries are adapting and adjusting to geopolitical changes. The perception of key stakeholders in the region does matter in formulating foreign policy.

There were more than 1,000 respondents from all ten Asean member states, in which respondents from Cambodia accounted for 2.4 percent of the total responses. The academic and think-tank community made up the largest group of respondents at 42 percent.

Most of respondents believe that regional outlook and developments will be more challenging and unpredictable. About 50 percent of responses predict that the region will go through a period of turbulence and uncertainty, perhaps due to the implications of evolving major power rivalry and the unfolding trade war between the US and China.

The role of Asean has been critically scrutinised. About 72 percent of the respondents expressed their disappointment with Asean, pointing out that “the tangible benefits of Asean are not felt.” This startling response is a lesson in itself. Asean must speed up reforms and deliver more results to respond to the needs of more than 640 million people. The strength and future of this inter-governmental organisation rests on its people.

Although the US has been trying to convey the message that it is committed to the region, nearly six out of ten respondents (59.1 percent) think US’s global power and influence has either deteriorated (45.6 percent) or deteriorated substantially (13.5 percent). Moreover, about 68 percent think US’s influence has either decreased (51.2 percent) or decreased substantially (16.8 percent) in Southeast Asia.

Cambodia is widely seen as a closest ally of China in Southeast Asia due to the fact that China is currently the main economic partner as well as an emerging key security and strategic partner of the Kingdom.

Cambodia has embraced China’s multilateral initiatives including the Belt and Road Initiative (BRI) as well as Mekong-Lancang Cooperation mechanism (MLC). About 71 percent of Cambodian respondents are optimistic that the BRI “provides much needed infrastructure funding for countries in the region.”

It is noteworthy that notwithstanding deep economic and security ties between the two countries, the degree of trust in China is quite low. This means that China needs to do more to earn trust and win the hearts of Cambodian people. 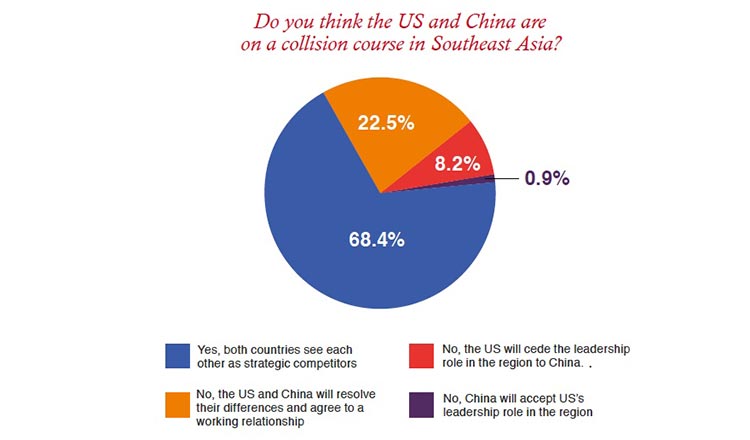 Japan is viewed most favourably by Southeast Asians. Nearly two-thirds of all respondents (65.9 percent) are either “confident” (53.5 percent) or “very confident” (12.4 percent) that Japan will “do the right thing” in global affairs. The level of trust in Japan is highest in Cambodia (87.5 percent). This explains that Japan’s soft power projection in Cambodia far outweighs that of China.

In terms of the economic outlook in 2019, most responses are positive. Cambodian respondents are generally optimistic about regional economic integration. Around 45.8 percent support, with confidence, a speedy and final conclusion of the Regional Comprehensive Economic Partnership (RCEP). Cambodian respondents also supportive of Cambodia being part of the Comprehensive and Progressive Trans-Pacific Partnership.

The survey findings partially explain Cambodian views of the region. Cambodians are optimistic of and proactive in regional economic integration. It can be argued that economic pragmatism and open regionalism are the main foreign policy objectives of Cambodia.

It is noteworthy that, according to the survey, although China’s political and economic clout in Cambodia is considerably high, trust remains a constraint in advancing the bilateral relationship particularly at the people-to-people level. Japan has been viewed by many Cambodians as the most honest and sincere partner.

Cambodia expects that Asean will take more concrete steps to narrow down the development gaps, strengthen its centrality role in shaping the evolving regional architecture.

An Asean-driven regional order, especially with the conclusion of RCEP and the enhancement of the strategic role of East Asia Summit and more functional cooperation under Asean Plus Three, will continue to serve common regional interests through the promotion of the principles of inclusiveness, openness, complementarity, and the respect of international rules.

Chheang Vannarith is president of Asian Vision Institute (AVI), which will be officially launched this month.

Myanmar: Why the reluctance to make itself understood?