KNUP eager to merge with Funcinpec

The Khmer National United Party has addressed concerns about the amount of time Funcinpec is taking to join forces in order to be a legitimate contender in future elections.

Nhek Bun Chhay, president of the KNUP, split from Funcinpec in 2015 and later formed the KNUP. Both parties failed to win any seats in the National Assembly in last year’s national election, which was swept by the ruling CPP.

“A majority of Funcinpec officials have expressed support to join with the KNUP, but several senior officials disagreed,” Mr Bun Chhay said on Saturday while addressing hundreds of supporters at his party headquarters. “That’s why some of them were removed from their positions during the last couple of months.”

Mr Bun Chhay called on Funcinpec to deal with their internal conflicts and quickly join forces with KNUP in order to compete in the upcoming council elections in May, when candidates will be elected to become provincial, municipal and district councillors.

“Both parties strongly respect royalty, and KNUP members desire to merge with Funcinpec,” he said. “We have talked about this many times, but the problem is that negotiations have been stalled because Prince Norodom Ranariddh is outside of the country.” 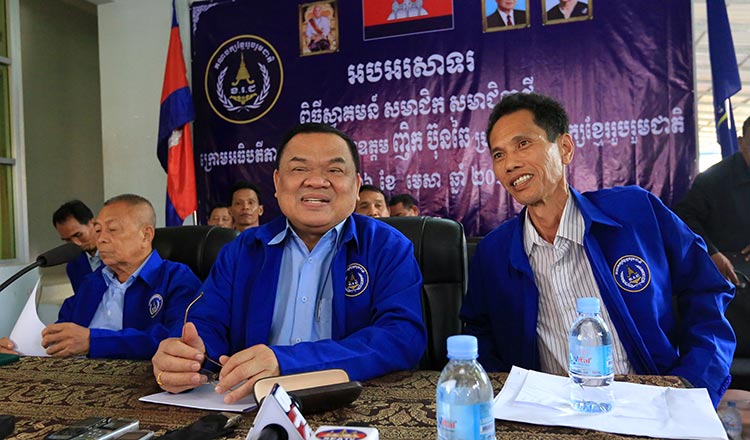 Mr Bun Chhay was deputy commander-in-chief of the country’s military when Funcinpec shared power with the CPP in the 1990s.

In 2016, he created the KNUP in order to compete with the CPP and the CNRP in the 2017 commune elections.

However, after the commune elections, he was stripped of his role as a government adviser as rumours surfaced that he was working with the CNRP.

Nop Sothearith, spokesman for Funcinpec, yesterday said only Prince Ranariddh is able to make a decision on the possible merging of parties.

“There has been no sign of a merge. Prince Ranariddh is currently undergoing medical treatment,” he said. “He can return to Cambodia after doctors have approved him to do so.”

In August, Prince Ranariddh removed three of the party’s vice presidents, including You Hockrey, Por Bun Sreu and Nhep Bunhin.

The removals came after Prince Ranariddh appointed Prince Norodom Chakravuth as acting president as he continued to receive medial treatment in Thailand after a car accident in Preah Sihanouk province in June that claimed the life of his wife.