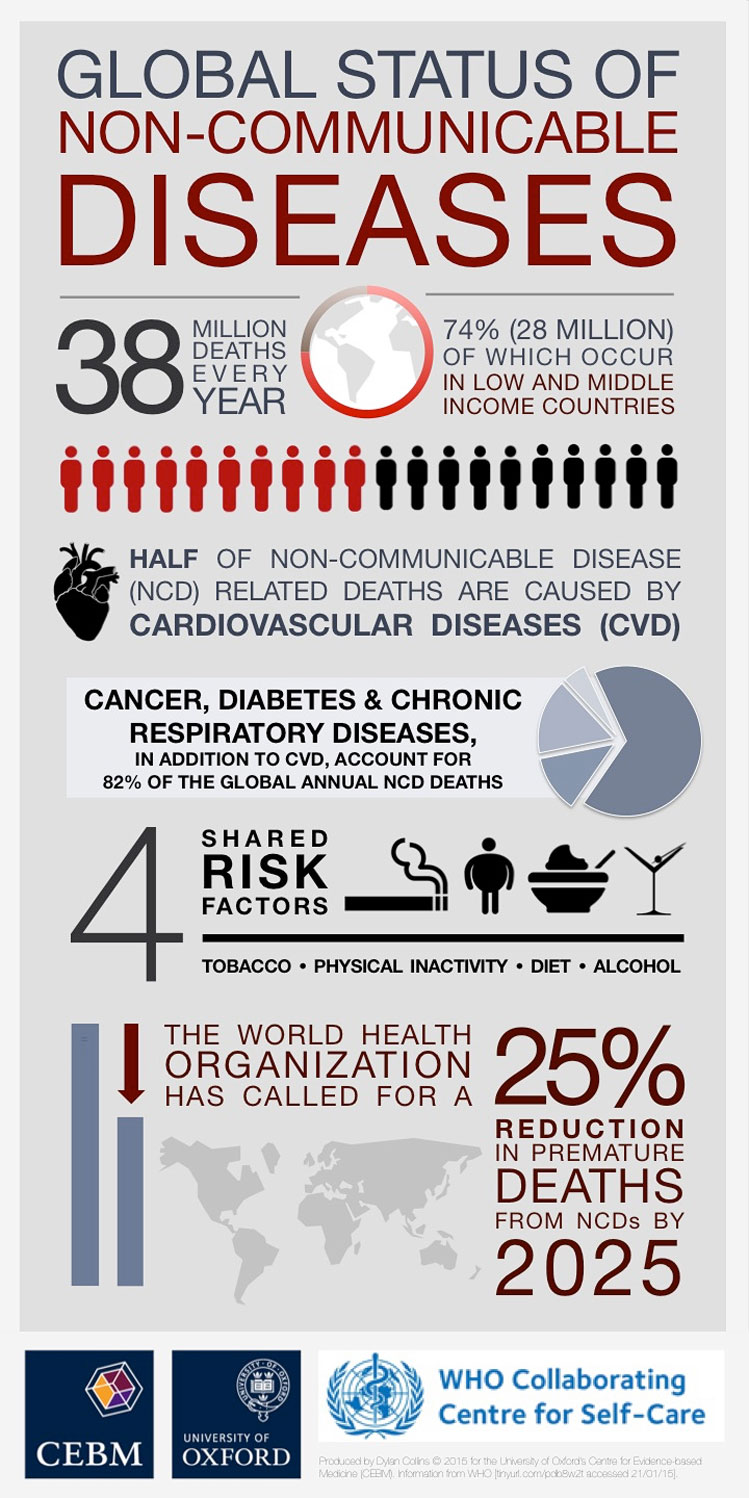 The human body is a magical machine – each cell, nerve, muscle and organ co-exists harmoniously to perform their own little ‘chores’. When everything is in the best condition and in perfect sync, the body can perform daily tasks effectively. However, sometimes humans are bound to face an abnormal condition that disrupts the bodily function in one way or another. This is what we know as a disease.

There are mainly two kinds of diseases: one that we can contract upon exposure to something contagious and can be passed from one person or animal to another, and one that is largely preventable and typically triggered by several risk factors.

In 2016, NCDs are responsible for 62 percent of deaths out of the total population in Cambodia, the World Health Organisation (WHO) revealed. Meanwhile, in the global context, NCDs led to an average of 63 per cent of all annual deaths, claiming over 36 million victims each year.

While this might sound concerning, you should not fret because believe it or not, you can be your own saviour by going through a few quick-fixes.

NCDs are also known as chronic diseases or critical illness. In essence, there are four major types:

Cardiovascular diseases such as heart attacks and stroke

Kidney and pancreatic diseases are growing concerns as well.

What you can do to keep NCDs at bay?

According to WHO, most NCDs such as heart diseases, stroke, type 2 diabetes and 40 per cent of cancer could be prevented if the major risk factors are eliminated. This means that you are less likely to be diagnosed with an NCD if you were to follow these five tips:

1) Tobacco is not your friend

Tobacco use is harmful to your body, period. A research by Tobacco Fact File revealed that one could lose anywhere from seven to eleven minutes of one’s life by smoking just one stick. This is because cigarette contains roughly 7,000 different types of chemicals, over 60 of which are carcinogens such as nicotine and tar.

Fact: Tobacco accounts for over 7.2 million deaths every year. This number includes those who have been exposed to secondhand smoke too. The WHO projected the figure to increase significantly over the coming years.

2) Cut down on booze

While the occasional glass of wine would likely help you unwind, it is best to keep tabs of your alcohol intake. This is because when taken frequently and in a large amount, it mainly disrupts the ‘job’ of your liver, which is to break down and remove harmful substances from your body. The more damaged the liver is, the harder it will be to expel toxins.

Fact: More than half of the 3.3 million annual deaths attributable to alcohol use are from NCDs, including cancer.

In the age where entertainment such as streaming applications are readily available across all gadgets, it is easy to succumb to a sedentary lifestyle. Staying idle for too long will not prompt your heart to pump blood as fast, which could lead to serious health problems. Break free of physical inactivity by starting small like going for a brisk walk around the block or take the stairs instead of the elevator when you can.

Since the nutrients found in food is our body’s main source of energy, it is vital to try to have a balanced diet. Remember, the key word here is ‘balanced’. Generally, one should always incorporate six main components: carbohydrates, fats, protein, vitamins, minerals and water in one’s daily meals. While it may be tempting to binge eat that tub of ice cream after dinner, for instance, take a second to weigh your options.

It’s a bird, it’s a plane, it’s a high-speed train