It’s a bird, it’s a plane, it’s a high-speed train

Van Roeun got on a high-speed train in Japan’s Fukuoka Prefecture and was amazed at the precision, Japanese practicality and safety.

It was late in the afternoon. Crowds of passengers hurried in and out of bustling Hakata station where transport modes are well connected.

It was about 4:30 pm in November. I was lucky enough to board the fastest train here as a media tour coincided with the International High-speed Rail Association forum held in the previous month and attended by hundreds of people, including Japanese government officials, railway officials, experts and researchers.

The introduction of a high-speed rail shortens travel time between cities and improves the main transportation network. The system enhances the convenience of intercity travel, speeds up movement of people and business between cities, officials said.

When the words “fastest train” touched my ears, I felt both amused and baffled. I tried to imagine if the speed was as fast as a plane – 300 km per hour was breathtaking.

A round trip from Hakata station to Kumamoto station in Northern Kyushu was amazing and thrilling. I took a seat by the window. I moved up the window shade and gazed through it. A few minutes later, the train was leaving the station and speeding up in full steam.

While I looked through the window, I was zipping by homes, vegetable farms and cars. It was superfast but the ride was comfortable. Every stop, passengers got off and on hurriedly as the train sped up again just after a few minutes.For anyone who is in a hurry, it is the best way to take the fastest train. I also noticed that everyone was bringing only handy bags.

Shinkansen trains are equipped with relatively spacious overhead shelves which could store small and medium sized bags and suitcases.

The seats come in rows of 3 and 2 seats. Seats can be reclined and have tables and pockets for magazines. They provide considerably more foot space.

Between 300km, 500km and 900km distance, the high-speed train is most popular with passengers compared to the plane as it takes between one hour and 33 minutes and 2 hours and 22 minutes respectively, according to statistics. A distance of 890km takes about 3 hours and 44 minutes.

Speaking through a recorded video at the forum last month, Japanese Prime Minister Shinzo Abe said that Shinkansen was very popular and it transported 400 million passengers a year.

“Now more than 50 years after the birth of Shinkansen, the Shinkansen network runs 3,000km across our entire nation, transporting 400 million passengers a year,” Mr Abe said. “The Shinkansen has had zero fatal accidents and continues to operate on a precise and punctual timetable, with some services operating with intervals of just three minutes.” 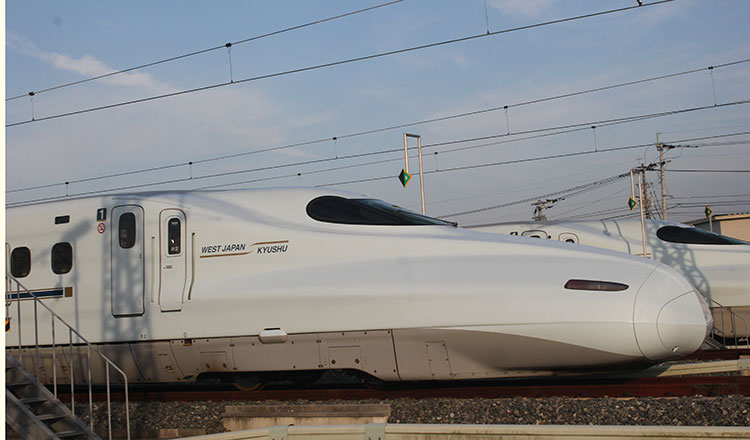 “It is very punctual or at least one minute late,” Mr Masafumi said.

Takaaki Furuhashi, chief of international railways policy and project division at Ministry of Land, said that the high-speed train is an automatically-controlled system and equipped with an early earthquake detection system.

“Japan Shinkansen system means crash avoidance because of no crossings and it is an automatically-controlled system,” Mr Furuhashi said.

Taking a ride from Kumamoto station in northern Kyushu back to Hakata station, journalists were allowed to visit the driver’s cabin.

My cabin ride was made more exciting when I was allowed to see where the driver operated the train.

Looking through cabin screen, I could not see the track or anything ahead because the speed was superfast. The sound of the engine was humming in my ears while the driver was trying to accelerate the train.

The train slowed down as it met a curved track.

“It slows down when we pass through a curve. There is a big curve on the left,” said an officer speaking through a translator.

When the train came to the stop in Hakata station, it was already late in the evening. Everyone got off and departed. I also got off the train and left, but my ride on the fastest train remains fresh and vivid in my mind.